Who watches the watchers? 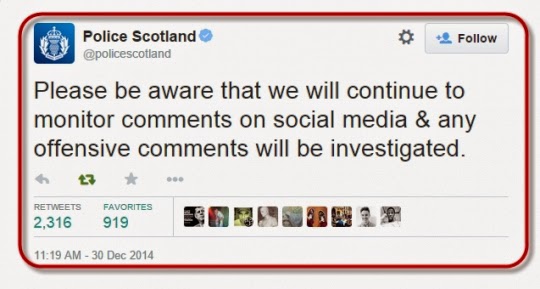 By ajohnstone at January 10, 2015 No comments: Links to this post

Between April and December last year, the police conducted almost 520,000 stop-and-search procedures on members of the Scottish public, almost 2,000 a day and twice as many as are carried out by London's Metropolitan police.

The SNP in 2007 committed itself to providing the country with an extra 1,000 police officers. Last March, the numbers of police officers in Scotland reached a record high of 17,496.

The Offensive Behaviour at Football Matches legislation introduced in 2012, which sought to target young, working-class men from Glasgow's poorest districts for espousing tribal sentiments in support of Celtic or Rangers.

Scots police were much more likely to go after people using mobile phones in their cars than those who had committed a sexual assault.

Meanwhile, despite almost 150 police officers being reported to prosecutors for alleged corruption, only six have been convicted. The alleged corruption included serious assault, bribery, blackmail and gangland activity. Unlawful access to secret files and lying in statements were the least of it. Strathclyde police, Scotland's biggest force, refused to provide figures on the pretext of cost.

According to the Independent, we learned that secret groups of Freemasons have been used by organised crime gangs for years to corrupt the criminal justice system. This echoes a chilling declaration by Strathclyde's deputy chief constable recently that 27 organised crime gangs were attempting to infiltrate the force by planting recruits in the ranks and grooming others. Yet, in Scotland the government has always resisted calls for membership of secret societies to be deemed unacceptable for all serving police officers and judges.

The establishment of  Police Scotland has resulted in a change of the Lothian and Borders approach to prostitution. Witness now the  treatment of the women who work in Edinburgh's previously tolerated brothels, the saunas and massage parlours, where condoms are no longer be allowed on the premises.

We have moves for  the removal of corroboration in trials - probably the single reason why miscarriages of justice are less in Scotland.  It has become a Scottish  parliamentary habit to trust prosecutors and trust police. Endorse criminal laws drafted in remarkable breadth which you'd baulk to see enforced, soothed by the idea that constables and procurators will only apply them to the really suspicious or mischievous or malignant characters caught by it, whoever they are. Will it be legal for a court to convict someone on a criminal charge, exclusively on the evidence of one witness, and without any external evidence supporting their claims? The short answer is yes: this law will make that possible.

By ajohnstone at January 22, 2014 No comments: Links to this post

Email ThisBlogThis!Share to TwitterShare to FacebookShare to Pinterest
Labels: police

you are being watched

Fife has the second-highest number of cameras in the UK and Aberdeen is sixth highest. Fife has 1420 cameras, which cost just under £1 million between 2007 and 2011. Aberdeen has 942 cameras, which cost £1.78m. Edinburgh City Council was the biggest spender in Scotland over the same period, amassing costs of £6.3m for just 232 cameras.
Nick Pickles, director of privacy and civil liberties at Big Brother Watch said "Britain has an out-of-control surveillance culture that is doing little to improve public safety but has made our cities the most watched in the world...There is no credible evidence that more cameras will reduce crime"
By ajohnstone at February 21, 2012 No comments: Links to this post

Email ThisBlogThis!Share to TwitterShare to FacebookShare to Pinterest
Labels: police

The police and the class war

Scotland's rank and file police are to call for the right to strike, currently denied them by law.
Members of the Scottish Police Federation , representing ranks up to chief constable, will debate the issue at their annual conference.

Police are prohibited by law from striking. The nearest they came to industrial action was a demonstration last year when 22,000 off-duty officers south of the Border protested over the pay deal they had been given. Many officers believe not being able to strike means they enter pay negotiations at a disadvantage and there is an increasing feeling within the federation that pay levels have been slipping.
By ajohnstone at April 22, 2008 No comments: Links to this post