Nationalism - where does it end?

Socialist Courier has already drawn attention to the unintended consequences for the nationalists in that where does separation stop in this post and here too.

The Guardian now reports, that politicians in Orkney, Shetland and the Western Isles have begun talks among themselves about their own "home rule". The councils are investigating plans to model themselves on the Isle of Man, the Channel Islands or the Falklands, which are crown dependencies and largely independent from the UK government, or to mimic the self-rule deal struck by the Faroe Islands with Denmark in 1948. Other less radical options include pressing for control over all their local fisheries, merging local health and social services, and taking control of the sea bed from the Crown Estates in London to help the islands profit from the boom in windfarms, on land and offshore, and marine energy projects about to start off northern and western Scotland. The three island groups are poised for a huge growth in investment by global energy companies: major tidal and wave energy parks are planned around their shorelines, while Shetland and Orkney are already seeing hundreds of millions of pounds spent on extra oil and gas terminals to service new fields being opened up in the Atlantic and North Sea.

Shetland council officials have drafted a detailed strategy on how to investigate Shetland's constitutional options. Shetland Council recently held a seminar to discuss the continuing loss of powers to Holyrood, the council tax freeze and various remedies including a bid for self-governing crown dependency status as currently enjoyed by the Isle of Man.Orkney council officials have compiled a 300-page briefing paper on the constitutional and political options which is being discussed by councillors.

Their alliance conjures up parallels with a campaign by rebellious Shetland islanders in the 1970s, when the Shetland Movement was formed to demand much greater autonomy for the islands as oil companies set up bases for the first wave of North Sea oil rigs.

Malcolm Bell, the convenor of Shetland Islands council, said the independence referendum offered an opportunity for the islands to carve out a new political settlement. "There's no point in Westminster devolving powers to Edinburgh if they are going to stop in Edinburgh. When you're 300 miles from Edinburgh, or 700 from London, at those kind of distances, Edinburgh feels as remote as London."

Central-belt Scots have relatively little contact with Orcadians and Shetlanders

Steven Heddle, Orkney's council leader, said: "We need to do this on a proactive basis because, if we don't do something ourselves, we're going to find the nationalists and the unionists pursue their aspirations, which don't necessarily tally with what we want."

The SNP’s Angus Brendan MacNeil, the MP for the Hebrides, said last year the islands might remain part of the UK “if there was a big enough drive for self-determination among their residents”,

Tavish Scott, the MSP for Shetland and former Scottish Liberal Democrat leader said there had been a "remorseless pattern of centralisation" under Salmond's Scottish National party government. "For me, this is about home rule; our islands being able to assert their natural and local identity, their distinctiveness, and get the powers and responsibilities they need to make the best of the modern world. If we don't set out our position, we will be subsumed into Greater Grampian or Greater Highlands. As night follows day, both Labour and the Scottish National party are centralising parties. They won't talk about public sector reform, but we know discussions are going on behind the scenes that Scotland is too big infrastructurally."

If more autonomy for Orkney and Shetland is a good thing, isn’t it a good thing for every community?
By ajohnstone at March 18, 2013 No comments: Links to this post

who owns the sea-side?

Socialist Courier reads that MPs on Westminster’s Scottish affairs committee recommend that the Crown Estate Commissioners, the body responsible half of Scotland’s coast and almost all the seabed should be stripped of the role and control of the coast handed back to the local communities.
“The point is to conserve these assets and maximise the benefits to the island and coastal communities most closely involved with them.The only way this can be done is by devolving as much of the responsibility – and benefit – down to those local communities as possible.”

Socialist Courier previously but briefly touched upon this subject when it highlighted the continued existence of the Viking-derived Udal law found in Shetland. Scottish Courts have acknowledged the supremacy of Udal law in property cases and in particular about shore ownership rights, where it declared that the Shetland community owns the sea and seabed around its isles. The Crown Estate had to admit the supremacy of Udal Law.
By ajohnstone at March 20, 2012 No comments: Links to this post 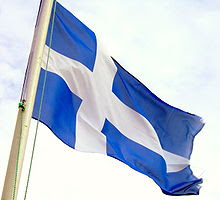 In the 14th century Shetland was still a Norwegian province. The Norn language, a form of Old Norse, continued to be spoken until the 18th century when it was replaced by an insular dialect of Scots known as Shetlandic, which is in turn is now being replaced by Scottish English. Udal law is a Norse derived legal system, which is found in Shetland. Scottish Courts have intermittently acknowledged the supremacy of Udal law in property cases up to the present day. Major differences from Scots law include shore ownership rights, important for pipelines and cables. It declares that the Shetland community owns the Sea and Seabed. The Crown Estate has had to admit the supremacy of Udal Law (and unlike the rest of the UK, swans are not legally the British Queen's property in Shetland.)

In 1468 Shetland was pledged by Christian I, in his capacity as King of Norway, as security against the payment of the dowry of his daughter Margaret, betrothed to James III of Scotland. As the money was never paid, the connection with the crown of Scotland has become perpetual. Christian had secured a clause in the contract which gave future kings of Norway the right to redeem the islands for a fixed sum of 210 kg of gold or 2,310 kg of silver. Several attempts were made during the 17th and 18th centuries to redeem the islands, without success.

After the islands were transferred to Scotland, thousands of Scots families emigrated to Shetland in the 16th and 17th centuries but studies of the genetic makeup of the islands' population indicate that Shetlanders are just under half Scandinavian in origin

From the early 15th century on the Shetlanders sold their goods through the Hanseatic League of German merchantmen. The Hansa would buy shiploads of salted fish, wool and butter and import salt, cloth, beer and other goods. The trade with the North German towns lasted until the 1707 Act of Union when high salt duties prohibited the German merchants from trading with Shetland. Shetland then went into an economic depression. By the late 19th century 90% of all Shetland was owned by just 32 people. The Crofters' Act in 1886 emancipated crofters from the rule of the landlords and enabled those who had effectively been landowners' serfs to become owner-occupiers of their own small farms.

The East Shetland Basin is one of Europe's largest oil fields. The extracted oil is sent to Sullom Voe, the leading oil export harbour in the UK, producing approximately 25 million tons of processed crude per year and 23 per cent of Scotland’s North Sea Oil revenues. Furthermore, scientists have that up to five billion barrels of oil could be found in unexplored volcanic rocks to the west of Shetland.

As a result of the oil revenue and those cultural links with Norway, a small independence movement developed. It saw as its model the Isle of Man, as well as Shetland's closest neighbour, the Faroe Islands, an autonomous dependency of Denmark.

In 2008 the Shetland Chief Sandy Cluness called for autonomy from Scotland for its 22,000 population. Cluness, the figurehead of the Shetland Islands council, who has no political party affiliation, advocates an independent Shetland assembly with tax-raising powers. Cluness believes that the Shetland council has been hindered by government centralisation and has called for a wide range of services including transport, policing, coastal protection, in-shore fisheries, further education and the arts to be administered from the capital Lerwick, rather than from Edinburgh. In the 1978 devolution vote the Shetland Isles voted against devolution .The general feeling was if we are not to be governed by Westminster, as part of the United Kingdom, then we would rather be on our own than governed by Edinburgh.

It has highlighted the weakness in the independent Scotland argument - if Scotland can gain its independence from the UK what is to prevent Shetland (which is closer to Oslo than Edinburgh) seeking its independence from Scotland, too. If Scotland does become independent again, then is it prepared to surrender a "cash cow" if Shetlanders chose to go it alone? Would an independent Scotland say to a breakaway Shetland "fair enough then, off you go and the oil is yours"?
"Born in iniquity and conceived in sin, the spirit of nationalism has never ceased to bend human institutions to the service of dissension and distress"
By ajohnstone at January 24, 2012 No comments: Links to this post