The price of clothes

Edinburgh Woollen Mill had contracts with the Tazreen Fashion factory in Bangladesh where a fire killed at least 112 workers. So did C&As

Bangladesh, the world's second-largest producer of clothes, has secured this position only by offering workers the lowest wages in the world and having some of the worst safety regulations in the industry. Before last week's disaster, more than 500 garment workers had died in fires and accidents since 2006. Land is at a premium in the country, and it is common for factories to have eight or nine floors. And although factories may have escape gates, owners often prefer to lock them, supposedly to stop staff stealing merchandise. In 2006, 65 workers died in a garment factory fire in the southern city of Chittagong after management ordered gates to be locked.

By most accounts, the Bangladesh tragedy could have been prevented by management simply spending more money on safety.  Money for new fire extinguishers, money for more access, money for additional fire escapes, money for conducting regular evacuation drills, and money for old-fashioned fire prevention measures

"All these fires in Bangladesh, if you look at why so many die and are injured, in most cases it is because you find that the doors are locked," said a Bangladeshi architect, Bashirul Huq. "The companies want to control the workers..."

Bangladesh has about 4,000 garment factories and earns about £12.5bn a year from clothes exports. The body responsible for enforcing workplace safety laws has only 20 government inspectors for all the factories in Bangladesh.

£23 is the salary of an assistant sewer for working a 48-hour week at the Tazreen factory. £20 is the price of a pair of ‘Driftwood’ shorts made on the hip-hop star Sean Combs’ ENYCE label, which were made at the factory.

As for those companies like Edinburgh Woolen Mills who, while having no direct ownership, rely on Bangladesh for their textile products, they continue to plead their ignorance. They say they had no knowledge of the woeful safety conditions.  Like those upstanding German citizens who lived in towns adjacent to Nazi death camps, they claim to have had no idea what was going on.

Fighting for Bangladeshi women in Glasgow 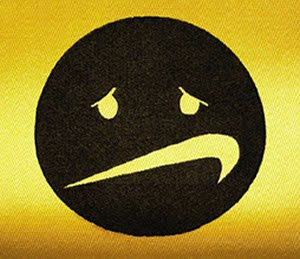 Women and men from UK Feminista took to the high street to protest against the exploitation uncovered in factories supplying Nike. The actions, taking place outside Nike stores in London and Glasgow. The demonstrations are a response to new research published by War on Want which has uncovered the systematic violations of workers’ rights in Bangladeshi factories supplying garments for Nike, Puma and Adidas.

All factories visited were illegally employing staff for more than 60 hours a week, and five of the six failed to pay the legal minimal wage. Eighty five per cent of Bangladesh’s garment workers are women. 1 in 10 workers experiencing sexual harassment. Many are refused maternity rights or simply fired when discovered to be pregnant.

Low paid jobs are consistently filled by women. Women lack other employment opportunities due to poor access to education, and are affected by entrenched gender stereotypes around what constitutes ‘women’s work’. These include assumptions around their primary roles as carers rather than breadwinners, stereotyping women as supplementary earners and so excusing the payment of low wages. In this way firms like Nike are able to profit from gender inequality through utilising a cheap, female labour force subsidised by stereotypes.

The protest was not asking for boycott. Neither did it aim to ladle guilt onto women as consumers over where they shop. Instead it was a protest in solidarity with garment workers in Bangladesh which aims to spotlight the ability of firms like Nike to reap huge profits relies on gender inequality and demanded that Nike takes positive steps to end this.
http://www.leftfootforward.org/2012/03/nike-exploitation-women-workers-bangladesh-uk-feminista-protest/
By ajohnstone at April 01, 2012 No comments: