Who owns the Moon 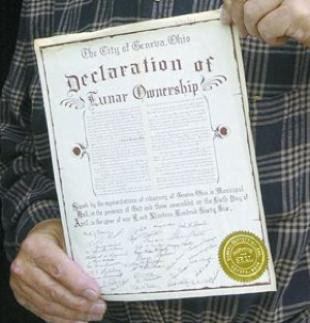 In a previous blog we reported on the possible future exploitation of the Arctic regions . Here we pass on a BBC report on how The Moon is now up for grabs .

Nevada, entrepreneur Dennis Hope has taken advantage of a loophole in the 1967 UN Outer Space Treaty and he has been claiming ownership of the Earth's Moon - and seven planets and their moons - for more than 20 years. Hope says he has so far sold more than 400 million acres (1.6m sq km) , that has already made him $9 million (£4.5 million).

But the real development that is about to take place is that, within a matter of decades, the Moon will be much more than a scientific outpost; it could become a vital commercial frontier.

President George Bush in January 2004 committed the US to returning to the Moon by as early as 2017. He said the US aimed to establish a long term lunar base by around 2020.

China - which has already successfully launched two manned space missions - has announced a similar timetable.
Russia, for nearly 50 years one of the world's leading space powers, may not be far behind.

Europe, Japan and India have also expressed an interest.

Large private companies and rich entrepreneurs have also seen a new business opportunity.
One of the biggest is US space contractor Lockheed Martin, which is currently developing technologies that will enable future lunar residents to exploit the lunar surface.
In particular it is working on a process which will convert moon dust into oxygen and water. It may even be able to turn it into rocket fuel.

But this is peanuts compared to what scientists believe is the real prize lying in the moon rocks.

Data collected from the Apollo Moon landings have indicated that large deposits of an extremely rare gas called helium 3 are trapped in the lunar soil. Plans are already afoot in the US and Russia to strip-mine lunar helium 3 and transport it the 240,000 miles (385,000km) back to Earth.
The Moon, claims Prof Jerry Kulcinski of the University of Wisconsin-Madison , could become the Persian Gulf of the 21st Century.