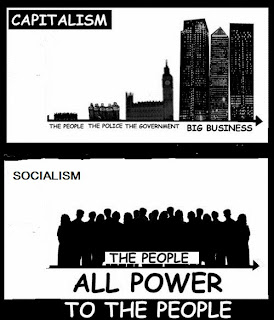 The class struggle is not over, the battle of the working class is not finished, the fight to achieve socialism, is not redundant nor ‘old-fashioned.’ But it is not taking place. Only a handful of revolutionary socialists appreciated the tremendous opportunities now opening up and are talking in terms of a total social revolution. They are challenging the view that the class struggle can continue to  remain confined to improvements within the system. The various Trotskyist groups fail to see the tremendous potentialities of the situation because they are mainly preoccuped to establish their leadership over the workers movement. They all say that what is missing is the correct party-line (which they all interpret as their own party’s). None of them have confidence in the ability of the workers to solve their problems without their kind of leadership, steering  the workers’ movement down a blind alley of reformism and nationalism. Concentrating upon building up one’s own party  fiefdom and paying attention to only the narrow interests of one’s own organisation is detrimental to the growth and development of the revolutionary movement. At the same time, however, to advocate unity with all and sundry, at all cost,  is reckless and suicidal. We must not jeopardise our identity as socialists by joining broad blocs that include non-socialists and even anti-socialists that inevitably accept the continued existence of capitalism.

Despite the cliche misrepresentations,  the Socialist Party promotes the principled unity within the trade unions. The principle of trade unionism has been to organise all the workers, in every trade or service. This principle over-rode all distinctions of religion or politics. Whatever a man or woman might think on matters of religion, whatever views he or she might hold in politics, he or she is just as entitled as the next man to join his or her union—and, once joined, to enjoy the same rights and receive the same benefits as everybody else.  Socialists are utterly against any division because their chief desire is to strengthen the working class. Working class unity is not utopian. It exists and always has existed to some degree, nevertheless we can say that the working class is presently disunited. There are no united struggles of the entire working class, and the employers have been able to split the working class into as many sections, trades and crafts as possible. As a result, there are struggles being fought of a trade, craft or section of the working class in isolation from the entire working class, but against the entire united capitalist class protected by their state machine and news media. The capitalist class deploy everything available to them against a particular section of the workers leaving the other members of the working class  to helplessly watch from the side-lines the struggles of their fellow workers, being fought in isolation from one another and ending in defeat. The unity of the entire working class is an absolute necessity.  It is most urgent  to organise the un-organised workers. Without organising the non-unionised workers, to talk about uniting the working class is merely a pipe-dream.

However, the labour movement must begin to address social and political questions as the representative of all the workers. It must challenge and defeat the tradition of top-down initiatives and complacent reliance on politicians. The workers themselves must take the initiative in uniting their forces. Unity must be built from the bottom. The Socialist Party defends the trade unions’ struggle for the democratization and  right to free expression, association and complete independence with regard to the State to the best of its ability.  The Socialist Party’s  objective is not substituting and commandeering of the unions, but the aim of winning over the working class in these unions, convincing them of the correctness of the socialist revolution  and the necessity of fully involving themselves.

The basic struggle of the workers is two fold: 1) the political struggle against the capitalist system, and 2) the struggle at the place of work for better decent wages and working conditions.
Trade unions cannot and never could lead the struggle of the working class for the conquest of political power. This task can only be accomplished by a political party. When it comes to building this party, there can be no question of it emerging from the defensive struggles waged by the unions against the capitalists, no matter how important these struggles may be. The influence of socialist ideas in the unions is still minimal.

Too often, those on the Left view not as one of the exploitation of labour by capital but as a problem of “unequal distribution of wealth” and therefore centre around “equalising” the distribution of wealth, usually by taxing the rich.  For the even more reformist the problem at the place of work is not the heartless exploitation of labour by capital but the problem of a “misunderstanding” between workers and management that can be solved by improving industrial relations. Both subordinate the political mission of the working class  of overthrowing the capitalist system to one of reforming the capitalist system. So long as the workers are divided, economically and politically, they will remain in subjection, exploited of what they produce, and treated with contempt by the parasites who live out of their labour.

By ajohnstone at September 24, 2013 No comments: Links to this post 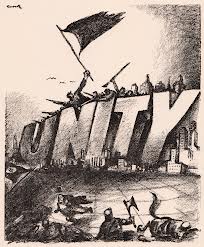 “Compromisers and schemers will still erect parties to serve their personal ends and satiate their lust for being worshipped; intellectual mannikins will still perch themselves upon the shoulders of the workers and imagining their high altitude is the result of transcendent ability on their part will call the world to witness how great they are; but they will be deprived of their power to delude the real revolutionist by the simple fact of the existence of a political party of Socialists dominated by and resting upon the economic movement of the working class.” James Connolly

A worker does not live alone on a desert island but is a member of a social community. We  cannot do without food, clothing and shelter.  In the earliest period of history society was based on the clan or tribe. Everything was pretty much owned and shared in common. There was no privately-owned property, no government, no rulers and ruled, no laws in the sense in which we know them today.

A feature of the present economic recession is that workers are beginning to once again take their ﬁrst determined steps in independent political action. Workers are being driven to this course by the ever-growing oppression of the employers and the increased use of the  governmental powers against them in their struggles. Many on th Left are now thinking and asking: How can the left-wing in this country be unified and strengthened? For many members of the working class it is a sincere aspiration.

The Socialist Party of Great Britain is for the unity. But it must be a unity of socialism and socialists. The unity with opponents – with people who have other aims and other interests, is not socialist unity. To accept into our party or to merge with another that possesses objectives entirely opposite to our own would indeed be foolish ...it would be party suicide. We cannot trade our principles, we cannot  compromise, we cannot make any agreement with the ruling system. We must  fight it to a finish so that socialism may arise.

The socialist does not lower its struggle to the level of potential allies but instead it urges those possible allies to raise the level of their struggle. The socialist does not fight for the half-hearted demands to “improve” capitalism, but demands that others abandon their timidity and fight resolutely to abolish capitalism. The strength and power of socialism rests in the fact that that the labouring class is exploited and oppressed by the capitalist class, and that within capitalist society effective reforms, which will put an end to class rule and class exploitation, are impossible. The socialist must not simply seek unity, but create unity on its own terms.

The existence of a class-conscious working class is an essential precondition for a socialist revolution. Class consciousness embraces a range of perceptions and commitments including an understanding that there is a distinct working class that one is part of, whose interests are counterposed to the capitalist class; a sense of solidarity with other members of one’s class; a belief in the need for and the possibility of successful struggles—political as well as economic—to advance the interests of one’s class; a conviction that the working-class majority can and should become the dominant political force in society (“winning the battle of democracy,” as Marx and Engels put it), reconstructing the economy so that it is collectively owned by all, democratically controlled by all, and operated in the interests of all—making possible the dignity and free development of each person in society.

It involves an understanding of the insight that was contained in the preamble of the American Federation of Labor from 1886 to 1955:
“A struggle is going on in all the nations of the civilized world, between the oppressors and the oppressed of all countries, a struggle between the capitalist and the laborer, which grows in intensity from year to year, and will work disastrous results to the toiling millions, if they are not combined for mutual protection and benefit.”

Not all workers have absorbed this insight into their consciousness, but those who have done so can be said to possess at least an elementary form of class consciousness. Such consciousness does not exist automatically in one’s brain simply because one sells his or her labour power for wages or a salary. The working class are going to unite, economically and politically, for their emancipation. A united, class-conscious working class on the economic ﬁeld has long been needed — needed by the workers, needed by the Socialist Party, and needed, above all, as an essential part of the labor movement.

The socialist task is not to deny democracy, but to expand it and make it more complete. That is the true socialist tradition. The socialists, throughout the history of our movement, have always valued and defended bourgeois democratic rights, restricted as they were; and have utilised them for the education and organisation of the workers in the struggle to establish full democracy by abolishing the capitalist rule altogether. The Socialist Party declares that the workers will free themselves from the exploitation and oppression which is their lot under the existing system of industries through their use of political power. The struggle of the proletariat for emancipation must be fought along political lines. Poverty starts with plunder; it is man-made and a political issue. Poverty will begin to end the moment poor people organise themselves and act politically to better their situation.”

Although a Trotskyist, James Cannon made this important observation:
“The surest way to lose one’s fighting faith is to succumb to one’s immediate environment; to see things only as they are and not as they are changing and must change; to see only what is before one’s eyes and imagine that it is permanent.”

By ajohnstone at August 31, 2013 No comments: Links to this post