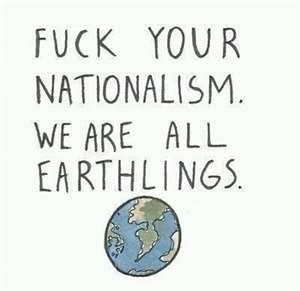 “Let's not be English, French or German anymore. Let's be European. No not European, let's be men. Let's be Humanity. All we have to do is get rid of one last piece of egocentricity - patriotism." Victor Hugo

The curse of nationalism is not new. There is always a load of myth and romanticism surrounding nationalism. Nationalism is an idea that varies in time and places which has as it central core the belief that a national population group is the most important political category, and political rights are primarily given to individuals as members of nations. Many of the areas within the UK have arguably been "nations" at some time in the past. Nationalism, for the Left is garbed in “national liberation” clothes to make it sound even more revolutionary. Nations, borders and flags indeed give people identity but that national identity is made up for reasons of power and controlling of the population that the nation state has inside its borders. For nationalists, freedom is achieved when an independent local government is established. Nationalist politics, however, cannot deliver freedom for the majority of people. The capitalist state is a structure of coercion which concentrates power in the hands of a small ruling class and despite constitutions and “rights” the state makes it impossible for the mass of the people to actively participate in the decisions which affect their conditions of life.

Why love a country more than any another simply on the basis of the bit of soil you happen to have been born on? The only thing that matters is class, not nationality or any of the other diversions that stop the "have nots" from challenging the "haves". Whilst the "have nots" are busy feuding with each other on behalf of the "haves" they are missing the real battle.  It is the working classes who are sent to war to kill and be killed on behalf of the "haves". They are the true enemy, not the working classes of other nations. Nationalism is a politics of a frustrated local elite who seek to build support for their own class programme by arguing that class alliances and independence are the way to resolve the genuine grievances of the people. Yet the local ruling class is dependent for its economic and political survival on the maintenance on close ties with other capitalists. They accumulate wealth by relying on the multi-national corporations, who it joins in joint business ventures. We reject the idea that there is a common "national interest" between the different classes within a "nation". Their interests are in direct contradiction. The phrase "national interests" hides the interests of the ruling classes, which are against the interests of the people themselves. Nationalism is not a vehicle for the expression of the will of the majority of the people - the workers - but is instead a tool of the ruling class. It serves to distract the people from their daily misery with a romantic invention, appealing to their emotion over their intellect in order to create a myth of "national interest", in which all classes of a country have more in common than their respective foreign brethren. The realisation of an independent Scotland means the realisation of the right of the local Scottish capitalists to take power and exploit the proletariat. It is capital that will continue to dominate our political institutions in whatever form they take and capital has no country. Separatism offers precisely nothing to the working class.

"The last sun of the century sets amidst the blood-red clouds of the West and the whirlwind of hatred.
The naked passion of the self-love of Nations, in its drunken delirium of greed, is dancing to the clash of steel and howling verses of vengeance.
The hungry self of the Nation shall burst in a violence of fury from its shameless feeding.
For it has made the world its food.
And licking it, crunching it and swallowing it in big morsels,
It swells and swells
Till in the midst of its unholy feast descends the sudden shaft of heaven piercing its heart of grossness."

Nationalism as a source of war and carnage; death, destruction and divisiveness, rather than international solidarity remains at the heart of Tagore’s poem. He said that if nationalism is something imaginary, humanity has to readjust their imagination  by extending the horizon of their mind’s eye, so that the fellowship of the species does not stop at a geographical border. The mythical image of nationalism as as a movement of pioneering, progressive, pious, peace-loving nation-building has been more than exposed. Every form of nationalism is no less aggressive or bigoted than is ever the case under a system of society where the laws of the jungle are presented as being the rules of civilised conduct. Every nation's flag is dripping with the blood of its enemies; every ruling class pays for its power in other people's lives.

The Socialist Party case against nationalism is straightforward. We do not advocate re-drawing the border. No socialist will ever fight to defend any border — we want to do away with the divisiveness of countries and states. Nationalism can never be a solution to the problems of oppression. The problem is class, not national, racial, or religious origins. As a class, workers have no country. The Scots do not own Scotland. There are two classes in society: those who possess without producing and those who produce without possessing.  Some Scottish workers identify with the aims of their rulers — they see their national identity as more important than their class identity with other workers. In this they are dangerously mistaken. Workers across the globe share a common exploitation at the hands of an increasingly global capitalist class. Nationalism means lining up with the same people who exploit them. Rather than submitting to the divide-and-rule  policy of the nation state, they should fight alongside other workers who, like them, exist to enrich the people at the top. Socialists say that a Scottish worker has more in common with an English, French or German worker than they do with their own boss. Nationalism has served as a convenient weapon of ruling elites to keep “the people” on-side. All sorts of unpleasant dictatorships have stirred up nationalist fervour to prop themselves up. We seek to do away with artificial boundaries and borders. The world will not be divided into countries by lines drawn on a map by capitalists to mark out their property. Our vision for a free society is that of a working class revolution which can finally uproot and defeat capitalism which brings not only exploitation but alienation too. Our goal is the humanisation of the economic system. We condemn the capitalist system where it must always be "You or I" and rarely "You and I".

We advocate class war and declare that the capitalist can never have interests in harmony with the worker. We hold up socialism as the only hope of the workers.