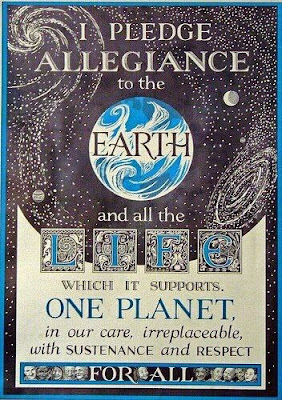 The importance of local democracy has to be seen in the context of the modern world. People aren't just concerned about whether a piece of local land should be used for housing, growing food, a cricket pitch or left as it is. People are engaged with issues affecting them which extend far beyond their local areas. So, as well as being citizens of their parish or district they would also be citizens of the world with all the opportunities for, and responsibilities of decision making and action in every sphere of life. Some of the problems which face mankind are "whole-world" problems. People are beginning to think in world terms. More and more people are coming to appreciate world music and world theatre. Millions more follow world sporting events, and there is a growing consciousness that all humans are part of one world, that we share a common planet. As more than one astronaut has remarked, when looking down on the Earth you can't see any frontiers. Millions of people throughout the world are concerned about world poverty and world hunger and problems such as global warming and tropical deforestation.Think globally, act locally.

We are all one species. Our world is the only one we've got and we must share it with everybody. Socialists do not stand for world government because we are opposed to governments everywhere. One World represents an entirely different vision of the future to the "United Nations" or "Internationalism" which, as their names imply, are attempts to improvise a patchwork from the fragments which capitalism makes of the world. We are for the planned production and distribution of wealth on a world scale to meet human needs. To move forward the dispossessed of the world must now look beyond the artificial barriers of nation-states and regional blocs, to perceive a common identity and purpose. We seek a global community with no private property beyond immediate possessions, no need for money, no racism or sexism, no enslavement of children, no profit motive to drive the oppression of working people, no battles over personal interpretations of spirituality, and no disrespect for the 'other'.

The socialist aim is a world where we peacefully cohabit our home planet. There never has been, and never can be, socialism in just one country. No longer will there be governments and their state machinery, or national frontiers. Instead of government over people there would be various levels of democratic administration, from the local up to regional and world levels, with responsibility being delegated if necessary to groups or individuals. A united humanity, sharing a world of common interests, would also share world administration. It is sometimes said that world administration would mean power of central control over local democracy. We, however, envisage an integrated system that would be adaptable and could be used for decision-making and action on any scale between the local and the world. In socialism, for the first time, local communities will be free to make decisions about the development of their areas. These would be decisions about local services such as health, education and transport; public facilities such as parks, libraries, leisure centres and sports grounds; local housing, the siting of production units, management of farming, care of the local environment, cultural events, and so on. The principle of local democracy would be that decisions affecting just local populations would be made by them and not for them by any larger or outside body. Local communities, nevertheless, cannot be completely independent or self-reliant as far as meeting their material needs goes; they are interdependent. People in small communities aren't able to produce all they need, or anything like it. The final stage of the production of a range of goods for everyday use could be done locally -- food, clothes, shoes, furniture -- as well as repairs but most of the raw materials cannot be produced locally. It is a question of them being interlinked in a single network of production which in the end embraces the whole world.

There is in reality only one world. Capitalism brought into being the one world. It is high time we reclaimed it. We have no country but have a world to win. Socialists aren't dreaming up a “perfect” or an “ideal” world. What we struggle to establish is a better world. Why we should prefer Scottish rather than British police to be used against strikes and pickets? Why we should want the government that presides over the operation of capitalism in Britain to be situated in Edinburgh rather than London? We remain unconvinced that we should take sides in the referendum debate about the political structure for running capitalism today.
By ajohnstone at February 15, 2013