Socialism is the antidote 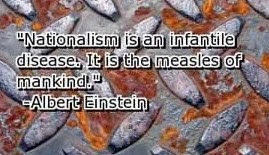 Some say the world is divided into independent, territorially-based states representing and pursuing the interests of capitalists from within their borders, and that the world economy is characterised by competing separate national capitals only. Others view the capitalist system as a single economy, even if divided politically and geographically, into separate “nation states”, and that the recent globalisation represents the emergence of a global capitalist class not tied to a particular national state. Those holding the latter idea fully understand that national states have not disappeared and are still powerful players in the capitalist economy but argue that the transnational capitalist class uses them, through favourable politicians and governments, to pursue its transnational interests (rather than them being used by a national capitalist class to pursue its national interests).

However, any transnational capitalist class would only be a section of the capitalist class of the world. There are still plenty of national capitalists, actual and would-be, whose interests are not the same as those of the transnational section. So, although political power in the advanced capitalist countries, may be in the hands of politicians favourable to transnational capitalists, there is still opposition to them. From the point of view of the transnational corporations, states no longer have important policy-making functions. It is enough if they enforce property rights and maintain basic infrastructure in areas important for business. Small states can do these jobs as well as large ones. In fact, they have definite advantages. They are more easily controlled, less likely to develop the will or capacity to challenge the prerogatives of global capital.

The ideology of national capitalism, reflecting the interests of small-scale capitalists, is still strong and finds support both from the “right” and the “left” who beat the same nationalist drum during the referendum debate. Being against capitalist globalisation is not the same as being against capitalism in general. We have ample past experience of a world of competing national capitalisms – quite enough to demonstrate that there is no good reason for preferring such a world to a world under the sway of global capital. Leftists such as the SSP in effect argue that workers should support national as opposed to transnational capitalism. Socialists, on the other hand, don’t take sides in this conflict between different sections of the capitalist class. Socialism will do away with all national oppression, because it removes the class interests that furnish the driving force of such oppression. Nor do we have any reason to assume that the nation, in socialist society, will form the basic politico-economic unit.

The Socialist Party is part of the World Socialist Movement which didn't get its name for nothing. Unique amongst all political parties left and right we have no national axe to grind. We side with no particular state, no government. We have no time for border controls. The world over, workers must do what they can to survive and resist capitalism. In many parts of the world that means escaping the tyranny of political terror or economic poverty. Workers should resist taking sides in the battles of the economic entities named on your passport.
By ajohnstone at February 17, 2013