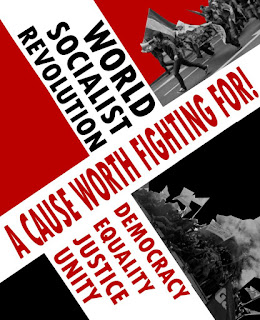 People don’t suddenly understand everything at once. Often they are politicalised (radicalised, if you like) by one issue that effects or influenced them. These people begin to question the whole society, and to see the inter-relationships between different issues. Our aim, in fact, is to help move people to a wider and broader perspective and understanding of the world. We point the way to the goal of the class struggle: socialism. Reformism preaches defeatism to the exploited. Nothing can be expected, nothing is possible but what exists, and what continues is betrayal of what could be with the argument of lesser evil. Those who call for a “lesser evil” — that is, for evil — will unfortunately succeed. The call for a “lesser evil” is what makes possible the greater evil.

Often revolutions are defensive. Fundamental social change takes place as a defense against attempts to take back hard-fought rights, gains, or conditions. Often revolutions do not occur out of ideological commitment to a better or higher social order. Ideas, on a mass scale, can transcend the ideological constraints of the existing social order only in part and for short periods of time, during intense, mass, independent from the ruling class activity. Often revolutions occur because deep contradictions develop between what people see as justifiable — as taught by the existing society — and the unjustifiable policies pursued by the ruling class. Capitalism creates a continuous conflict between its own ideals and the reality it creates. Capitalism cannot resolve its basic contradiction by becoming more responsive to social needs except for short periods of time, and then only in a limited manner. This is the case because taking into consideration human needs always comes into conflict with the drive for profits that is capitalism’s reason for existence. Inevitably, capitalism is forced to go against its own ideals and thus open the road towards revolution. Even such a simple everyday concept as the right to education, which we have come to take for granted, at least at the secondary level, comes into direct conflict with the profit system and so we have a groundswell of opposition to student debt and privatized schools. The struggle for universal education is now deeply ingrained in our consciousness as a norm and a right and there exists resistance against it being undermined. The expression “life, liberty, and the pursuit of happiness” takes on a 1001 varieties that are coming into increased conflict with the needs and very premises of the capitalist order. From efforts to protect our environment to the battles against oppression based on gender and race, people are drawn into the struggles to defend a “tradition” that lays claim to the right to “life, liberty, and the pursuit of happiness”.

An understanding of the traditions and ideals that exist among the exploited and oppressed is crucial if we are to develop a united working class capable of linking together with a common consciousness. It is essential for driving a wedge between the ruling class and the people to build mass movement against the ruling class. The traditions of the struggles of working people, includes the revolutionary rhetoric to Lincoln's claim that democracy should be “of, by, and for the people”, which we now have as the basis for opposition to present ruling class policies. Marx referred to a “dictatorship of the proletariat” as opposed to a “dictatorship of capital”. Marx was not speaking of a draconian government with a state-security apparatus. A “dictatorship of the proletariat defends the interests of the working people, is by definition far more democratic in any form than the most democratic dictatorship of capital, which must defend the interests of a tiny minority. The working class itself forms the absolute majority of the population. A call for control by working people is itself a call for democratic majority rule. Today, we have a government responsive to corporations run of, by, and for the rich. A majority of people, based on democratic traditions, favor a democracy genuinely of, by, and for the people, but do not fully understand that the present governments does not meet that goal. Our task is to claim for ourselves the positive interpretation of democracy and so drive a wedge between the masses and the ruling class. The world is ripe for a planned rationally based economic order that produces for human needs and is administered democratically. All our social problems are intertwined, and the struggle to improve the quality of our lives and our “rights” are tied to our tradition of struggle. The right to vote, the right to representation, is deeply ingrained in our culture and traditions and can become a powerful weapon against the ruling class.

A return to a better understanding of Marxism and a better grasp of linking up with one’s own revolutionary heritage could be a means of persuasion. The efforts of the well-intentioned but dogmatic sectarians who opposed, sometimes correctly, certain errors and abuses within the workers’ movement too frequently led to self-righteousness, and to the formation of “vanguards” who fancied themselves the final answer. History has shown them wanting. The Left today is, in general, divided between ideological dogmatists on one side and single-issue activists on the other. The sectarians wish to overcome our dichotomy between less politicized activist and highly politicized dogmatist by recruiting out of the activist layers new members into their sects. We reject this.

In the beginning there arose a mass social movement calling for working people to fight for their rights as capitalism developed in the 19th century. This movement had an ongoing debate over what its ultimate goals should be. Its immediate objectives were somewhat obvious. It fought for better pay, shorter hours of work, better working conditions and in many cases against various forms of ethnic, racial or social discrimination. But also, fundamental to the immediate struggles was the struggle for political rights for working people, the right to vote being one obvious and important issue. The conception of a future society in which there would be no rich or poor, where society would be run democratically both politically and economically, where the economy would be rationally planned and production would be based on human needs not profits for individuals, gradually became accepted by millions throughout the world. That future society was generally referred to as socialism. Marx raised the concept that to change the nature of capitalism to a society responsive to the needs of the majority — the working people — a change of who rules would be needed, something that the present ruling circles would resist by any and all means.  Marx made a differentiation between struggles for reforms within a capitalist society and a struggle to fundamentally change society, that is, to revolutionise society.

The confusion in the minds of working people on a world scale is immense regarding the word “socialism”. For most it is an economic project that inevitably will end up in a totalitarian government. For some it may mean “Sweden” or simply lots of welfare safety nets. Socialism means reorganizing the economy so workers would have the decisive say and society would be run for the benefit of the majority. It means rational planning and equality. In the last analysis if we are correct and capitalism will be surpassed by a more rational social order in which class divisions as we have known them will end, this has to have very deep objective roots. If our concept of the origins of ideas is the material world, the ideas of class struggle and of a socialist vision, are being generated continuously. The experiences of people in this society — the exploitation, oppression and abuses — always generate struggles, organizing and the development of social movements. Ideas about these movements and how to change society are always in flux. To believe that a small number of enlightened leaders discovered the magic wand is not materialist. Our movement is still developing ideas on how to organize and how to change society. A lot of people around the world are thinking about these issues. Their experiences are helping them to find a way forward to end the way capitalism is destroying the planet and its human population. The future will hold all kinds of surprises especially regarding forms.

Language is not a tactical question. It reflects the real political content of our movement and to begin to overcome the isolation is a political need to shift away from sectarian traditions, language, internal culture and stale methods of intervention. Rather than always start from what happened in history it may be  better to start from what is needed in the world to create a peaceful, just, ecologically sound, prosperous society for all, and how that translates into reality. The future changes in society will only come about after the socialist movement has literally become the culture of working people. The potential power of the people is so great that it puts sharp limits on what corporations can do. There is now no more important issue than saving our planet from destruction. We do not consider ourselves a substitute for other movements or organizations, such as peace and environmental organizations and other specific issue groups that seek to unite people of all political persuasions around a specific platform. We welcome diversity to defend conditions. But we must have unity of purpose when it comes to changing society and establishing a socialist system.
By ajohnstone at August 26, 2015