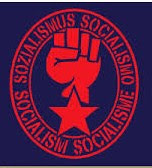 This is the age of science. We are on the thresh-hold to a new world. Never was there such an immense power for good. But how have the ruling class used this knowledge and potential. Have they ended poverty? Have they introduced security? Have they provided a high standard of living? Have they brought about the peace and harmony which is possible with plenty? Have they used new technology to create the more wealth to share in? Have they really made proper use of the power placed in their hands by science and technology? Never has the world had such a wonderful opportunity to build a decent place to live in but what kind of world have the ruling class built for us all? The industrial machine age did and still pours out great wealth but where is it going?  We can see the ordinary people are not growing fat on it. Mankind is smart enough to travel through space, dig into the bowels of the earth, travel deep under the sea; but we go hungry in the midst of food. That is capitalism! It cannot be otherwise under capitalism. Instead of plenty for all – it is luxury for the few and deprivation for the rest of us.

It is the system in which the man who owns the tools of production does not work them whereas the man who works them does not own them. This is the basic contradiction of capitalism. The product does no longer belonged to the producer – the worker at the machine. It belongs to the capitalist owner of the machine. He sold it for the best price the market would pay. And gave the worker the smallest wage he would work for. The less wage for the worker, the bigger the profit for the capitalist. The bigger the wage for the worker, the less the profit for the capitalist. The capitalist is simply interested in longer hours, speed-ups and low wages. The worker is only interested in shorter hours, easier work, and high wages. Capitalism has employers pitted against employees - at war with each other - engaged in a class struggle with each other.

The capitalist owner of industry has only one reason to run his factory-profit. Under capitalism, the needs of the people for various goods are not the primary purpose of production. The capitalist will just as soon make rifles as bibles. All he asks is: "Which will pay more?" The fact that the millions of people depend upon industry for food, clothing, housing, furniture, transportation, communications and amusement is of interest to the capitalist only as the "market" in which he can realise a profitable return. He is the dictator over his plant. He can run it or shut it down to please himself. If production pays he hires and offers overtime. If profit falls, he throws his workers into the streets.  For all the rhetoric there exists no great plan nor social purpose. The only god is the Almighty Dollar and the Holy Script is the magic word "Dividends." This makes capitalism more destructive than any Act of God such as earthquakes, tornadoes, floods, cloudbursts, tidal waves and volcanic eruptions ever divinely visited upon earth from the beginning' of time. Capitalism kills and cripples millions in its wars, in class strife and civil war, in hunger and freezing, in industrial accidents and disease, in malnutrition, in poverty and crime. It destroys the wealth of society and wastes the potential of millions of idle hands. Place a hundred people in a room with a tiny opening for air. As they begin to suffocate, a mad fight takes place, with everyone attempting to get to the opening. In their madness, friend will turn upon friend, brother upon brother, son upon father. That is capitalism.

Capitalism pits worker against worker in bidding for a job. It pits capitalist against capitalist in fighting for profits. It pits workers against capitalists in class struggle. It pits capitalist nation against capitalist nation in war. It pits producer against consumer, landlord against tenant, farmer against city dweller, white against black, gentile against jew. All in a mad race for a crust of bread, for survival, for a bit security and this in an age when plenty is possible for all! It is the system of competition, dog eat dog, of each for himself and the devil take the hindmost, of the law of the jungle. An age of plenty - the New World within our power and reach - is being trampled in the dirt. Capitalism stands before us indicted as a system of criminal insanity, dripping with blood and filth. And the capitalist class stands before us as crazed overlords careering the planet towards its destruction.

When a capitalist nation is not at war, it is preparing for war. It must keep the people in a mood that makes them ready to fight. It is therefore necessary to instill a nationalist spirit in people. "My country, my flag." And not knowing whom they might have to fight, the capitalists instill in the people a hatred of all the neighboring nations.  In the Human Family such national hatreds would die out. And with the end of national hatreds and wars would come the end of militarism. Cutting out this great waste of resources would bring more to share in the good things of life. When one knows that one has enough for today and tomorrow and that there is more where that came from, one will no longer think as we do. We only want to heap up wealth for fear that we may some day be poor. Or else in order to get to the top of the heap and exploit others. Socialism will establish a new principle of pay: "From each according to ability, to each according to need." No longer driven to work by fear of hunger, labour will become a pleasure and a privilege to perform.

Socialism will not only mean plenty for all, but also freedom for all. For the first time in history, people will really be free. Free from fear. Free from fear of the boss, fear of losing his or her job, fear of war, fear of insecurity, fear of hunger. Democracy cannot function when men and women  live in fear; when people fear to say what they think, fear to write what they believe, fear to join with those they agree with. Without true freedom there cannot be true democracy. For democracy to work it needs above all complete freedom for men to speak and write as they believe. Can there be freedom if one must depend upon others for the right to earn a living? If others can control our jobs, do they not control what we can say? If another has power over my bread and butter, over whether my children have food or not, does he not also have power over my freedom? That is why there can be no real freedom under capitalism, even in the "free-est" of countries. Every last person must have a feeling of complete freedom in participating in the affairs of a democratic decision-making. He or she must feel free to suggest, condemn, criticise, advise, proclaim without the slightest fear that those in charge will be able to strike back by discrimination on the job. This can never be under capitalism. That is why capitalist democracy can never reflect what the people are really thinking. Only the capitalist class are free in a capitalist democracy to speak out. Who controls the mass media, the school curriculums, the hundred and one ways of bringing ideas before the public? These are in the hands of the capitalist class. Is there a genuine right of free expression when the media can publicise what they please and refuse to circulate thoughts that capitalists think are "undesirable"?

If you are a worker, surely you cannot agree to go on living under capitalism, with its crises and uncertainty. Surely, you want to organise to fight to end it. The first step is to turn your back upon the parties of capitalism, Labour and Tory, Democrats and Republicans. The second step is to join with those who are striving to abolish wage slavery. The Socialist Party constantly seeks to educate our fellow workers as to the truth about capitalism and the need for socialism. Find out more.