Humanity is One Family 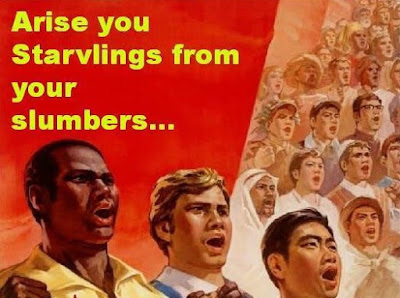 Each person in the world is family. The people in a society founded upon common ownership orient themselves toward what is necessary for a good life, and not towards what makes the most profit. Economic, ecological and social crises are merging to form a single one, a crisis of civilization and sheer existence. We need a worldwide shift away from capitalism. Common ownership reflects people’s understanding of the nature of human life, we are not commodities to be traded. We, the people, need new societal institutions that are bound to a new relationship of humans and nature. Common ownership builds the bridge between the individual and society. Common ownership will be a society without money, barter or trade, where technology and science is used to their fullest to develop and manage the planet’s resources to provide abundance for everyone in the most sustainable way. This is the vision of a peaceful and cooperative world that the Socialist Party aspires to.

As long as we continue to live in a world where we are in conflict with one another we are bound to experience suffering, on a collective level. We don’t have to live this way. As Marx said “Doubt everything”. Question all beliefs and ideologies that have been handed down to you from tradition, no matter how back in time they go. We need to question everything: our personal assumptions, social and political institutions, ways of relating to one another and the planet. We have to be willing to change it all. Educate yourself about a better, alternative economic system. Stop supporting and voting for those who want to keep humanity enslaved, the ruling class and their political protectors. Let’s support one another to change ourselves, so that, together, we can change our world. They keep telling us that humans are selfish and greedy. It is not true.

All over the world there is a feeling that something is deeply wrong. Many are filled with cynicism, general conformism and apathy. On the one hand, there is growing interest in social activism and political participation. Our so-called leaders only talk about economic growth at all costs as the only viable solution to mass poverty, wealth inequality, the climate crisis. The question of money is often raised in discussions about the realization of alternatives to the growth-based economy of capital accumulation. The logic of money is a fundamental built-in error of current-day thinking. For the civilization based on the economy of maximization, monetary value becomes the touchstone of all values in the sense of morality and ethics, namely the debate is about the fact that nobody should remain hungry as long as others, have enough to eat. We should not quibble about the World Bank’s $1 or $2 a day definition of poverty. The blind pursuit of money are by those whose actions destroy the life-giving capacities of the Earth, who place profit above all else. People are consumed as a “resource” to fill the coffers of the wealthy. For the sake of share-price on the stock-market, forests and soils are depleted, fish stocks exhausted, pollution poured into the rivers and seas, and fossil fuel emissions spewed into the air.  The prevailing power institutions within capitalism are doing everything they can to convince us that the solution to our social and environmental problems is going to be found in the very same policies that have created them in the first place. The T.I.N.A. [There is No Alternative] narrative continues to dominate. For a lot of folk the characterization of the today’s system as a democracy is an oxymoron.

It is a personal dilemma for many to know how much the world is screwed up yet still be hopeful about the future. The more we learn about what it means to be human, however, the more hopeful we can become. We increasingly recognise how profoundly social and cooperative society is despite the many problems the system possesses. The more we look for solutions to our collective problems, we find that indeed there are solutions to be had. We realise we don’t have to sit back and watch the world collapse around us. It is in the world socialist movement that a solidarity spirit wins out over self-interest. In a socialist party, working people hone a sense of obligation to one another and build a fierce loyalty to a vision of a sharing economy where labour is treated with dignity. As socialists we experience the class power of coming together and standing up against the ruling class.  Important as the struggles in the streets, communities and workplaces are, it is the mass socialist party where people have real defining experiences.
By ajohnstone at September 03, 2016

It's really so nice and fantastic blog which i really appreciate it well done and keep posting.
spiritual rap for peace