There are no short-cuts 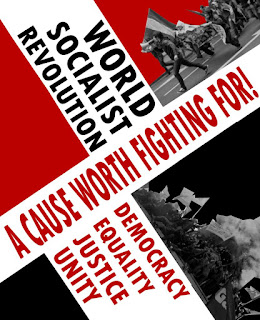 “Capital is dead labour that vampire-like only lives by sucking living labour and lives the more, the more labor it sucks.” - Marx

In socialism, labour power is no longer regarded as a commodity to be bought and sold. It is not purchased at all. There will be no wages. Goods will be produced for the use of men and women and NOT for the profits which they bring to bosses. Humanity will have been freed from the capitalist system.

For the global capitalist ruling classes and  the corporate elites who actually run the system, to the extent that anyone is actually running it — things couldn’t be going much better at the moment. While for the vast majority of us, the future is looking increasingly miserable. The Socialist Party has never resorted to conspiracy theory and suggested the capitalist class consciously plan their domination and hegemony – the worldwide socio-economic-political situation is a bit more complex for the Bilderberg conferences to fix and rig. The capitalist ruling classes have imposed their control on more and more of the world, commodifying and absorbing what little is left outside the market. They are transforming the entire planet into one giant shopping mall/labour camp is. JPMorgan Chase, ICBC, HSBC, Berkshire Hathaway, Royal Dutch Shell, AXA Group, Toyota, Exxon, Pfizer, Novartis … does anyone believe these transnational banks and corporations have any real allegiance to the “sovereign nations” they nominally reside in, or to the citizens of those “sovereign” nations?  It is the interest of these corporations, and the global capitalist ruling classes (including government and deep state elites), that we do not perceive the world this way, and that we continue to believe in the sovereignty of nations, and that we think of ourselves as citizens of these nations, despite all the evidence to the contrary.

But people aren’t so easily deceived although they seek false solutions in a resurgent nationalism and divisive xenophobia. When we are marginalised, ignored and silenced, some of us become desperate and are tempted to turn on each other. Across the world nationalist parties have been making gains.  In Austria, Hungary, Sweden, Denmark, Finland, Greece, Switzerland, and elsewhere such as in Russia and the Ukraine. In Germany they have their AfD (the Alternatives for Germany party) In France, it’s Le Pen and the Front National. In the Netherlands, it’s Geert Wilders and the PVV (the Party for Freedom). In the UK it is UKIP and in the US it is Trump even though the most vocal for the claim of American exceptionalism is Clinton.  None of them pose any real serious challenge to the reign of world capitalism. Nationalism grows because we fear the absence of our “identities”. The racists and patriots have been driven to extremes by delusions. Economic anxiety and inequality are contributing, as it always does, to the rise of right-wing, anti-immigrant, xenophobic and racist politics. Many of the people most hurt by austerity and the recession are turning to the very politicians who created the conditions that fostered the social problems or who wish to use discontent as a ladder to power. Despair and desperation can cause people to do things that are against their self-interest and make them resent people who seemingly are doing better than they are – public sector workers and unionized workers.

The corporate media is working hard to convince us that these is no alternative and too many of us embrace a utopian capitalist future in which each and every one of us can be a thriving entrepreneur. An alternative is unimaginable … literally unimaginable, in the sense that we are not yet capable of conceiving a credible alternative system, or a way to get there. Those of us who do have a vision of a better future fully realise our present impotence. We have been traveling very fast in an unknown direction, unsure who is at the steering wheel. Now humanity is awakening.

Today, activists are divided into dozens of single-issue campaigns. Many fail to understand the kind of power required to change society we need to build the workers’ movement into a robust force.  It is a strategy anchored in a deep belief in the capacity of ordinary people to understand the goal and to organise for it without a widespread and clear idea among workers of what a socialist society entails, it will he unattainable. The reason is simple. The very nature of socialism necessitates understanding. There is absolutely no way in which such a sweeping fundamental transformation of social relationships could be thrust upon an unwilling, unknowing majority by some minority, no matter how enlightened or well-meaning.

An understanding of socialism will not come by the spontaneous and automatic blossoming of this knowledge in the bosoms of millions of isolated workers. Mass socialist consciousness will develop out of the common experiences of workers and the interaction of ideas drawn from those experiences and through unity on the basis of socialist knowledge. This means the growth of socialist parties around the world, armed with the strength that comes from unity, able to meet and vanquish the divisive ideology of capitalism by clearing away the smokescreen it creates between the worker and the recognition of his real interests.

The job of the Socialist Party is clear—to put the case for socialism, to encourage workers to reject capitalism and start organising for the conquest of political power.
By ajohnstone at September 20, 2016