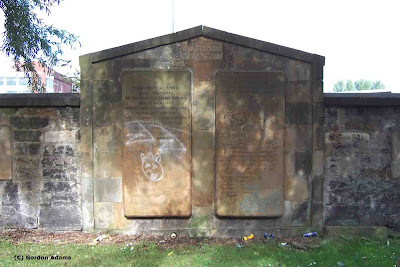 Calton Burial Ground in Glasgow is the memorial cemetery to the six Calton weavers who were killed on September the 3rd, during the 1787 strike by troops of the 39th (Dorsetshire) Regiment of Foot, called ut by the magistrates. The burial ground is located on Abercomby Street.

A small green grave lies down by Calton
In the heart o' Glasgow town.
Men of honour, men of courage,
Their names are honoured with renown.

Two hundred years ago they suffered
For the workers glorious Cause,
They were shot defending Freedom
Against the boss and Tory laws.

On Glasgow Green the weavers gathered, 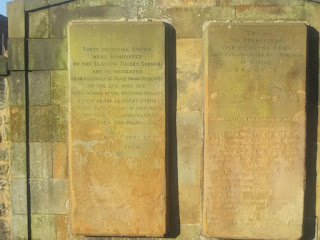 For Tyrants might cared not a fig,
They marched from Calton up towards the Highgate,
And faced the army at Drygate Brig.

At the provost's order the coward soldiers
Opened fire and six men were slain,
And the people's anger it spread like wild-fire
From Glasgow Cross out to Dunblane.

These were the lads who wove all clothing,
Shot for upholding a scanty wage,
While the boss and soldier are damned forever,
Brave names will glow on history's page.

In a small green grave down by Calton,
Spare a thought and a prayer as you pass on,
These were the pioneers of Freedom,
And heralds of a brighter Dawn. 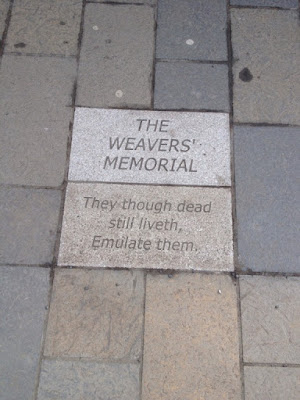 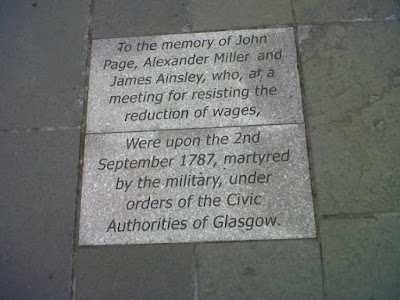 'They are unworthy of freedom who expect it from other hands than their own'
By ajohnstone at September 03, 2016