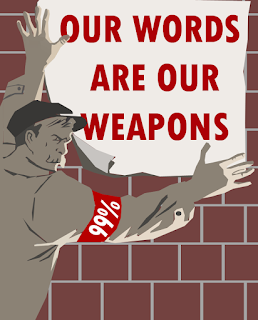 "You do not need the capitalist. He could not exist one second without you. You would begin to live without him. You DO everything. Some of you imagine that if it was not for the capitalist you would have no work. Really he does not employ you at all. You employ him to take from you what you produce, and he sticks faithfully to his job. If you can stand it – he can – and if you don’t change it – he won’t." (Eugene Debs)

Specifically, capturing the state apparatus has to be, in a bourgeois democracy, by the ballot box -"capitalism's Achilles heel". Certainly, it is essential for to win the battle of ideas outside of parliament but this won’t be done by selling them a lie that capitalism can be reformed, by well-meaning or careerist, Left, Centre Left or 'riding two pro-capitalist horses' with one-arse politicians. You are the dreamer, along with the Corbynites, if you think a Labour government which from its earliest incarnations bent to the will of the dominant economic class in society while making worker-friendly noises.  To continue repeating the same historical folly of trying to reform capitalism is by definition an insane reaction to capitalism's madness. The Labour Party is very much a party of capitalism, albeit a reformist one which  has the delusion that capitalism can be reformed and made more equitable. No matter how the Labour reconstitutes itself, it can only run capitalism in the interests of the capitalist system, which means waged slavery for the vast majority and wealth, ease and luxury for an economic parasitic, capitalist class, living off the wealth created by the immense majority.

Anything else, which occurred during the 20th century has little to do with socialism and more to do with minority-led revolutions to overthrow feudalism.

Socialism is the work of and has to win the support of the immense majority. It is not something which will come, "Like a thief in the night", (Keir Hardie) by gradualist 'baby steps' of reforming capitalism, or by nationalising the commanding heights of the economy, state capitalism.

But misrepresenting a capitalism reformed as socialism as the Corbynites seem to be doing won't get socialism either. The task of creating the socialist post-capitalist, production for use, free access, commonly owned, a world is that of the working class itself. The people need to sack the parties of capitalism and elect themselves into running a production-for-use world. There is no short cut to this.

In the real world, of course, capitalism cannot be reformed in any meaningful way, despite the pious sounding hopes of either well meaning, or opportunist politicians of whichever political persuasion

For example:
"Statisticians rate almost 7,000 areas in Scotland by standards including income, employability and health. The statisticians say "deprived" does not just mean "poor" or "low-income". It can also mean people have fewer resources and opportunities, for example in health and education. Glasgow has 56 of the 100 most deprived areas. Edinburgh has six."

...and the problem in capitalism is that some of those deprived  areas, Easterhouse, Barlanark, Carntyne were part of the solution offered by successive Labour and Tory governments in the post-war house  building boom.  Yes, we well remember the hopes of the people who moved from the slums of the east-end into Easterhouse and Drumchapel. The solution of council housing, was welcome enough at the time, inside bathrooms, hot water and so on, a luxury initially, to build new flats  and some houses in the peripheries of the city, in places like  Easterhouse, Drumchapel, Castlemilk, but these we came with fewer social amenities, the building of them provided employment for many, but when  the council housing boom ended, the dole queue beckoned for those  unfortunate enough to have not secured a place in the light engineering  factories sprung up, but soon to vanish, with the Thatcherite wind of  change, itself a product of capitals inevitable crisis-ridden system. They began to deteriorate quite early in the 70's. There really was not much to do, in a social sense, for youths.

We remember Frankie Vaughan coming up to help launch the Easterhouse Project, a youth facility. As the song went, "I'm Frankie Vaughan, jist come up tae gie yese a' a haun". Billy Connolly's characterisation of them as, "deserts wi' windaes" struck a chord. One socialist recalls moving to London to find work, (after being stabbed), which paid a bit better, but after being made redundant was quite happy to get a flat in Easterhouse again, where he was surrounded by really nice people doing their best but the closure of factories set him off wandering again in search of wage slavery, 'twas ever thus.

It really is the counsel of despair to imagine that capitalism can be reformed. This is not to play politics but to end the pretence to yourself that government over you is in anything but the interests of the capitalist class. To lie to yourself that a different government will have different outcomes. No change at all. Workers still produced all of the wealth in return for a waged ration. Thatcher's government was just doing its capitalist masters new bidding in dismantling the 'homes for heroes', 'cradle to the grave', capitalist caring ideology which won the post-war consensus. Kinnock’s Labour would have done the same as Smiths Labour would have. Hence Blair.

Surplus wealth is not produced by the parasite capitalist class, but by workers. All wealth comes from labour. Capital is stolen surplus value.

Capitalism is not amenable to reform. The free market system requires a majority to be exploited of their surplus value. It is but one of the many paradoxes of capitalism that it has shrunk the world only to divide society into smaller and smaller fragments. That it has progressed at breakneck speed in the fields of travel and communication yet it has divided and alienated us from our true humanity. Anti-social behaviour is a result of the despair engendered by the hopelessness of capitalism a consequence of the system and not a fixable problem.

“The comfort of the rich depends upon an abundant supply of the poor.” Voltaire

Capitalism's profit requirements will place severe constraints on what any government can achieve and that, like their predecessors, they will have to compromise and run the economic system in favour of the  capitalist elites which they currently rail against.

"If money, according to Augier, ‘comes into the world with a  congenital blood-stain on one cheek,’ capital comes dripping from head  to foot, from every pore, with blood and dirt." Marx