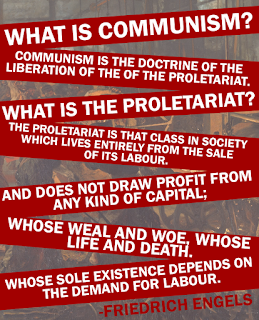 It’s been a long time in coming but socialism is finally back on the political scene. It’s no longer an anachronism. For the first time in decades, socialism is out of the closet. Socialism is no longer a dirty word (the “S-word”). However, it is incumbent upon the Socialist Party that we should put some meat on the bone. We have to have our model post-scarcity society heard above the clamour and confusion of every claim to be socialist. Being green and progressive is not enough.

Who Owns What?
Socialism is the common ownership by all the people of the factories, mills, mines, transportation, land and all other instruments of production.

Who Benefits?
Socialism means production to satisfy human needs, not as under capitalism, for sale and profit.

Who Runs Things?
Socialism means  the control and management of the industries and social services by the workers through a system of delegated and recallable democratic administration processes based on their worldwide economic organisation. In socialism, all authority will originate from society, integrally united in various self-managed associations. In each workplace, the producers will elect whatever committees or representatives are needed to facilitate production. Within each shop or office division of a plant, the workers will participate directly in formulating and implementing all plans necessary for efficient operations. Such a system would make possible the fullest democracy and freedom. It would be a society based on the most primary freedom—economic freedom. For individuals, socialism means an end to economic insecurity and exploitation. It means workers cease to be commodities bought and sold on the labor market and forced to work as appendages to tools owned by someone else. It means a chance to develop all individual capacities and potentials within a free community of free individuals. It means a class-free society that guarantees full democratic rights for all the people.
Socialism will be a society in which the things we need to live, work and control our own lives—the industries, services and natural resources—are owned in common by all the people, and in which the democratic organisation of the people within the industries and services is the government. Socialism means that government of the people, for the people and by the people will become a reality for the first time.

What Socialism is Not…
Socialism does not mean government or state ownership. It does not mean a one party-run system without democratic rights. Those things are the very opposite of socialism. "Socialism," as the American Socialist Daniel De Leon defined it, "is that social system under which the necessaries of production are owned, controlled and administered by the people, for the people, and under which, accordingly, the cause of political and economic despotism having been abolished, class rule is at end. That is socialism, nothing short of that."
Remember: If it does not fit this description, it is not socialism—no matter who says differently. Those who claim that socialism existed and failed in places like Russia and China simply do not know the facts. Socialism has never been tried Socialism has never existed. It did not exist in the old U.S.S.R., and it does not exist in China.

How We Can Get Socialism
To win the struggle for socialist freedom requires enormous efforts in organisational and educational work. It requires building a political party of socialism to contest the power of the capitalist class on the political field, and to educate the majority of workers about the need for socialism. It requires building economic organisations to unite all workers into a class-conscious industrial force, a One Big Union, and to prepare them to operate the tools of production.

Socialists are fighting for a better world—to end poverty, racism, sexism, war and environmental disaster. The Socialist Party’s position, in brief, is that the workers can only advance towards socialism in the light of socialist knowledge. A class-conscious socialist working class presupposes the acceptance and understanding of the essentials of socialist principles by a majority of the exploited class. And if the workers would turn their attention to socialism, the whole form of the class struggle with the employing class would change. So far, despite heroic fights by trade unionists against wage reductions, the employing class have never had reason to fear that the working class was turning away from their belief in the capitalist system. But when a considerable body of workers learn the lesson that no reformist policy or party is of any use and begin to understand and support the demand for socialism, we can confidently anticipate a less aggressive and less cheese-paring attitude on the part of employers. They will, when that time comes, be anxious to surrender part of their wealth in the hope that by so doing they may stave off the day when they must yield it all. We shall then be well on the way to the acquisition by a society of the means of wealth production now privately owned by a privileged class. So who have the workers to turn to in their fight against the class that lives off them? Only themselves. They are in the vast majority and able at any time to vote out the system that plagues us all. It may seem disheartening that they still won’t listen to the small voice of the Socialist Party who urge them to do so. But our voice will continue to be heard because it speaks historic fact and logic. Marx argued the case for a future society without buying and selling, wage-labour or capital. That alone is the object of the Socialist Party.
By ajohnstone at September 15, 2016