Socialism is not reforms, it is revolution. 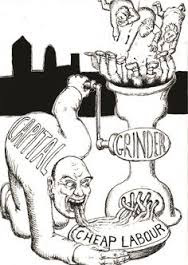 Any conception of socialism must include the empowerment of the working class to be the master of its own destiny. Whilst we can debate and sketch visions of what a future society might look like, all these discussions will prove meaningless unless we can find away to acquire the power required to make them concrete.  Given the seeming powerlessness of the working class at present what means can the working class be elevated to power?  In a sense the working class already has a massive latent power over society just waiting to be realised, the task then is unlocking this power. When workers are organised in accordance with their class interests they are better able to wield their latent power. The working class is the real agent of change. The slogan of “revolution” has been misused so blatantly that it has lost its meaning.  The workers’ movement is lacking political  clarity. The problem is the lack of of consciousness. Why don’t workers put an end to capitalism – given its destructiveness to humans and the environment. If you don’t know where you want to go, then no road will take you there.

Marx  explains that:
“The advance of capitalist production develops a working class which by education, tradition and habit looks upon the requirements of this mode of production as self-evident natural laws”, that “the organization of the capitalist process of production, once it is fully developed, breaks down all resistance”.

Marx added that capital’s generation of a reserve army of the unemployed:
“sets the seal on the domination of the capitalist over the worker”.

Accordingly, the capitalist can rely upon the workers’ “dependence on capital, which springs from the conditions of production themselves, and is guaranteed in perpetuity by them”.

Of course, by necessity workers will often struggle, over wages, working conditions and the defence of past gains. We support workers’ struggles for reforms, but we do so without fostering the illusion that reforms will solve the harm to humans and the earth that is intrinsic to capitalism—let alone will they ever make work anything other than drudgery.  But as long as workers look upon the requirements of capital as “self-evident natural laws”, those struggles occur within the bounds of the capitalist relation. Sooner or later the worker will accept his subordination to capital and the system keeps going. People commonly think that there is no alternative to the status quo. To go beyond capitalism, we need a vision that can appear to workers as an alternative common sense, as their common sense.

The struggles of workers against capital transform “circumstances and men”, expanding their capabilities and making them fit to create a new world Marx argued. Even though their goals in these struggles may be limited to ending the immediate violations of norms of fairness and justice and may be aimed, for example, at achieving no more than “a fair day’s wage for a fair day’s work”, people change in the course of struggle. Despite the limited goals involved in wage struggles, Marx argued that they were essential for preventing workers:
“from becoming apathetic, thoughtless, more or less well-fed instruments of production”;without such struggles, workers “would be degraded to one level mass of broken wretches past salvation”.


People struggle over their conceptions of right and wrong, and what socialists attempt to do is to explain the underlying basis for those struggles. The moral campaigns for "rights" while acknowledging its importance to the working class there is also to go beyond them by articulating and showing what is implicit in these concepts and struggles are only to be contained within a new society.

Marx pointed out, the root of exploitation under capitalism is not insufficient wages per se, or the depredations of finance. The process of exploitation under capitalism necessarily implies that for accumulation to take place on one end, the worker must be paid less than the value of their labour-time on the other. The more capitalist production expands, the less time the workers has for themselves. The struggle over exploitation is fundamentally the question of whether the worker has the time to fully develop her intellectual, social, and creative powers, or must devote this time instead to the reproduction of a hostile, alien, and benumbing society, with no time to call their own. This is a ‘bread and butter’ question in its own right. Socialism is to create a world where labour-time for all workers can be reduced to a minimum to leave the  maximum time for leisure pursuits, socializing, sports, art, music, writing, debating, and all those things that have been considered the good things in life. There is no known process of capitalism that can achieve this aim.

The establishment of socialism involves workers taking power themselves and exercising collective and democratic control over workplaces, and resource allocation through democratic planning, the complete democratisation of society.  Socialism is "a movement of the immense majority, acting in the interests of the majority".