There is a vision

Is it possible for capitalism, a society organised in the interests of profits for a handful of people who live off the exploitation of the overwhelming majority of the people of the world to use new technology for constructive purposes in the interests of mankind? The answer is, of course, no. A class society which lives by exploitation can only subordinate scientific invention to the interest of private profit. The destruction of the world is a grim reality unless the social order of capitalism is abolished and replaced by socialism, the society of all the people. Socialism is not some Utopian scheme. Capitalism has created the economic conditions for socialism. Today there is social production but no social ownership. Socialism will bring social ownership of social production. It is the next step in the further development social evolution. Socialism will be won through the revolutionary overthrow of capitalism and the capture of political power by the working class. In socialism, the working people will take over the economic forces developed by capitalism and operate them in the interests of society.

Socialism will not mean government control.  It means the end of exploitation of one person by another.  The main means of production – the factories, mines, mills, big workshops, offices, agricultural farms, transportation system, media, communications, medical facilities, big retailers, etc., will be transformed into socialist commonly owned property. Private ownership of the main means of production will end. Socialism will open the way for great changes in society. The economy will be geared not to the interest of profit, but to serving human needs. This will release the productive capacity of the economy from the limitations of profit maximisation. A great expansion of useful production and the wealth of society will become possible. Rational economic planning will replace the present anarchistic system. Coordination and planning of the broad outlines of production by civic agencies will aim at building an economy that will be stable, benefit the people, and steadily advance.

To administer socialism, the people will establish a social democracy, a genuine democracy for the masses of people.  The people will elect officials and representatives at all levels of government and the economy. There will be the right of recall and referendum. Workers will be able to manage democratically their own workplaces through workers’ councils and elected delegates. In this way, workers will be able to make their workplaces efficient places that can serve their own interests as well as society’s. Social democracy would be far broader than what is presently possible since the people’s actual voices will be heard, not simply those of the rich. The working class, through its own political party, the Socialist Party, will play an important role in society through education, persuasion and by the example of its own organisational structure in the construction of socialism. There will be no overnight miracles under socialism, but the way will be cleared to achieve a decent, meaningful and productive life for all working people. There will still be problems inside socialism since human progress always advances through overcoming obstacles and contradictions. Social democracy will be the form of the political rule of the working class.  Socialism will be a truly classless society. The people will have unprecedented possibilities for the improvement of their lives. Socialism is indeed a society where labour power is no longer a commodity.  under capitalism, this medium of exchange has taken off with a life of its own. For the capitalist, the aim of production is not to produce goods to use, but instead, it is a drive to accumulate capital through exploitation–simply put, to make more money. Once money becomes the aim of production, labour power has to become a commodity. In other words, a worker’s labour power can be bought and sold. Labour power as a commodity is the necessary complement of the private ownership of the means of production by the capitalists. Only by buying the worker’s labour power can the capitalist make profits. Workers produce more than what the capitalist pays them in wages and benefits. This is the basis of exploitation of the workers. What the workers produce over and beyond the socially necessary labour for keeping themselves and their families alive and working is surplus value. Surplus value is the only source of profits and is ripped off by the capitalists.

With socialism, labour power is no longer a commodity. And in a socialist society not only do you no longer sell your labour power to the capitalists. You are no longer the exploited class, but the ones who run society. It will be the first time the vast majority become the rulers rather than the ruled. That’s why the socialist revolution has to be so thoroughgoing, so far-reaching and is so difficult. 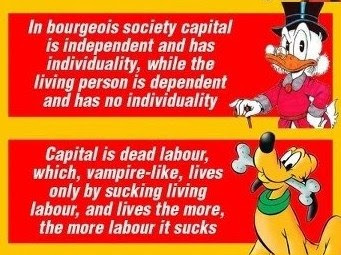