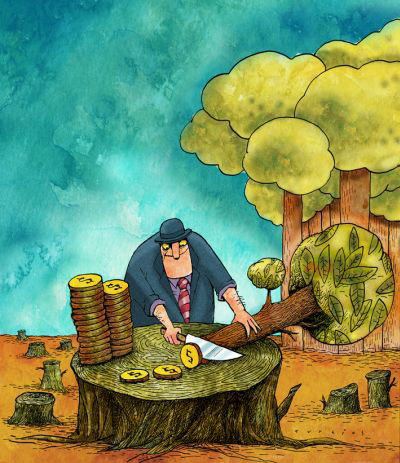 It is no longer possible to deny the urgency with which humanity must act to change if civilisation is to survive.  Humanity is at a turning point in history. We face multiple and massive environmental problems which will become irreversible so that the planet will not support the existing global civilisation. The destruction of the environment has reached calamitous proportions. It is a searing indictment of the short-sighted and disastrous policies of the capitalist system. The ‘Greenhouse Effect’ and wanton destruction of the environment is inevitable in a society dominated by blind market forces. The competition of interests makes capitalism absolutely incapable of developing adequate answers or even safeguards.

Our previous harmonious relationship with nature is broken; the cause is capitalism. The crisis arises because production is not geared to satisfy needs, but instead to produce profit.

Capitalists produce with the hope of gaining as large a share of the market as possible, and in the process, they collectively produce too much. The wastefulness of capitalist production is as much a strain on nature as it is on the fabric of society. Practically everything in this world is determined by profit and the capitalists concern themselves with the ecological problem only insofar as it affects their returns.

Capitalism is based on the principle of private property of where a small group of people "own" the Earth for the purpose of exploiting it for profit for their benefit. It is vital to appreciate that the widespread damage to the environment originates from the normal functioning of the system and not from its malfunction. It is not an aberration that can be cured. The ruling class has no good ideas about how to address the climate crises other than through the prism of the market and the stock exchange.

The World Socialist Movement says capitalism cannot save the planet from ecological disasters. It questions the ability of capitalism to foster a low carbon-emitting economy. The capitalist system is in direct conflict with nature. Profit consists of taking out more than you put in. This is certainly contrary to the socialist principle of a sustainable steady-state economy, “simple reproduction” as Marx called it, a balance of give and take.

Left-wing greens’ certainly talk the talk with proposed alternative solutions to environmental crisis which involves social reconstruction including direct grassroots democracy, decentralisation, cooperative enterprises, community ownership of productive resources, and workers control. They call for independent political action, outside the establishment political parties, based on local-rooted activist groups such as Extinction Rebellion and Sunrise, as well as the older more established lobbyist groups, Friends of the Earth and Greenpeace.

Those who try to regulate the system, in the end, merely make the road smoother for the corporations, once the vested interests in control of the state, modify, amend and water down their demands to make them more palatable for the capitalists. The market does not operate in abstraction. The political power wielded by corporations will prevent the rationality of human survival from triumphing over the irrationality of capital accumulation.

We cannot any longer ignore the accumulating and accelerating number of reports, and studies that have appeared which raise the prospect of serious harm to humanity and the scenario of our planet no longer being capable of supporting a modern civilisation and becoming effectively an unliveable world.

The Socialist Party has reached the conclusion that this system cannot be reformed. It is based on the destruction of the earth and the exploitation of the people. There is no such thing as green capitalism, no matter how radical capitalism is framed. Socialism would mean organising human communities in a manner that is compatible with the way that nature thrives. Capitalist society robs us of a healthy relationship with each other, creating rivalry, competition and hatred. If this type of society de-humanises us, we can fully expect to be alienated and estranged from our natural surroundings. Socialists strive towards a survivable society. To accept that many cultures must perish or radically transform the way we relate to one another and to nature is the question humanity has to face.  Failure to address this problem and answer it with solutions will only guarantee immense suffering associated with a societal collapse as ecological ruination comes to pass. The struggle for world socialism remains a necessity. Even if the socialist revolution we will still be in a global environmental crisis. However, the crucial point is that a socialist, democratic  society would not face the corporate and government apparatus of political obstruction and commercial resistance with insistence upon  “business as usual.” Nevertheless, we should be well aware that the longer the procrastination and postponement of the cooperative commonwealth, the more severe will be the consequences and the greater may be the required policies for halting carbon emissions.