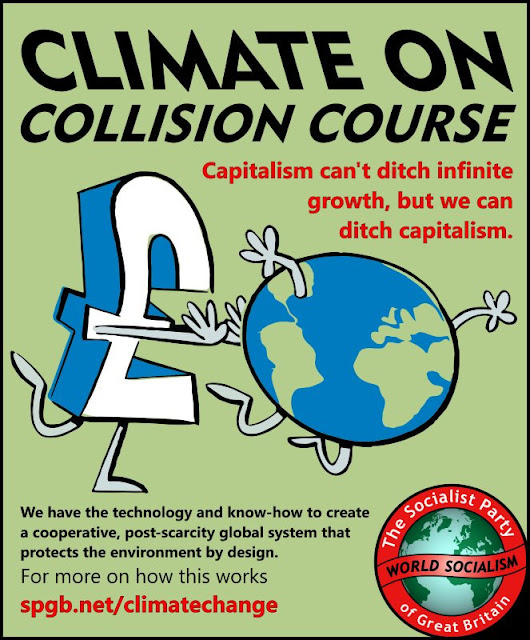 On Saturday the streets of Glasgow were filled by 100,000 people wishing to protect the planet from the ravages of the climate crisis. Similar marches seeking to defend the environment took place across the globe.

COP 26 is said to be a pivotal world-changing moment in history because we may be approaching an ecological catastrophe and the COP26 attendees claim they will be able to provide remedies to the climate crises with agreed cures. Many at COP26 believe they are humanity’s last best hope. Yet if truth be told, they are found wanting for solutions. We will concede that climate change indeed presents a potentially revolutionary moment if we dare to take action.

There’s no techno-fixes and no stock market answers to global-warming. A shift to clean, green renewable energy sources could reduce fossil fuel emissions but more growth, more production, more consumption of resources, will still mean we are headed deeper into the climate crisis to be confronted by a possible civilisation collapse. Since cutting economic growth is unacceptable to businesses and governments, any such suggested approach is quickly abandoned. If there’s no capitalist solution to ending the plunder of the planet then the only other alternative is to replace capitalism.

This doesn’t mean we go back to pre-industrial times, that we discard all the material progress made over the last few centuries. But it does mean closing down wasteful and polluting industries. Much of the commercial world is socially unnecessary, the military and the armament manufacturers, the banking and financial sectors. We have fast junk-food instead of healthy, nutritious, fresh “slow food. We wear “fast fashion” clothes destined to landfill after a few outings. We have shelves upon shelves of disposable products with built-in obsolescence with superfluous packaging just to hook us into a purchase. We can completely redesign the production of appliances, electronics,  furniture and so on to be as durable and repairable. Homes can be constructed to last for centuries, to be energy efficient, to be shared by generations by being family-friendly. All these changes are simple, self-evident, no great technical challenge. They just require a completely different kind of economy, an economy geared to producing what we need while conserving resources.

The question is this: will you stand by and protect the profit system rather than protect the planet? Our alternative is a pragmatic and practical vision of world socialism because it’s the only answer.

Business-as-usual with its various attempts to make climate action as compatible with the market (carbon trading, carbon offsets, monetising/commodifying nature) is driving us straight toward civilisation-threatening tipping points. Capitalism is all about ideology, it’s about class and class power which we need to abolish in order to get rid of capitalism. Common ownership and the cooperative commonwealth is what we have to build.

It’s not magical thinking. Mitigation strategies such as consumerist lifestyle changes are half-measures, in themselves worthy aspirations but insufficient and ineffective to fully resolve our environment crisis.

Procrastinating over market-based policies or speculative geo-engineering schemes merely postpone the inevitable onset of extreme weather events. The system of capitalist production and the necessity of accumulation is fundamentally incompatible with any sustainable relationship between humanity and the environment. A supposedly tamed capitalism cannot salvage the planet from the savage ravages of the profit system.

Corporations cannot be co-opted to act as the green saviours of the Earth in the never-never land of “benevolent” capitalism. There are no “good” capitalists even if Bill Gates tries to canonise himself as a saint. None of the philanthropists fundamentally alter the economic system that is the problem and that is the problem.