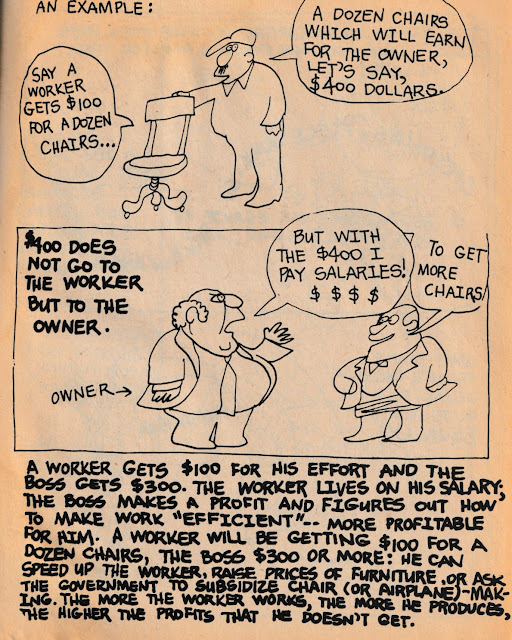 Capitalism is the organisation of brutality and chaos. The world is crying out for socialism, the democratic control of production by the producers and the worldwide planning of resources. The Socialist Party believes that capitalism is a system of private and state accumulation and profit, that is inherently a system of inequality, injustice, and war. We want a social system where social wealth is not in the hands of a few billionaires but is collectively controlled by the people. Human needs cannot replace profit as the driving force of society unless working people administer their workplaces and their communities. To end exploitation, the working class needs to struggle for its own interests. Our enemy is capitalism. In order to fight the enemy and win, we have to understand the enemy. Under capitalism, a handful possesses the communications, factories, mines, land and transport networks. We are fighting this system.

A socialist is an internationalist. It is nationalism that divides the working people so that the workers of one nationality are struggling against the workers of another nationality for a few scraps the rulers throw out exactly for that purpose! It is nationalism that pits groups of workers against each other with the most hideous rage, while their respective oppressors pursue a little fun in the sun. Nationalism serves the capitalist class in the sense that they are seeking a market for their goods. Any nationalism finally implies that people born on one particular patch of land are better than all others born by accident elsewhere. We are all the victims of nationalism that preaches superiority and inferiority.

What is socialism? If we are socialists, what are we actually aiming for? And how was this new society to be achieved? These questions, long a subject of debate, is receiving even more attention today because of the momentous changes taking place. We have much to teach and learn from each other. Realising socialism’s potential requires flexibility and innovation. Socialism can only be built if the majority of the people support it actively involved in building it. The building of a classless society involves the participation of millions of people not only through their votes but also in the actual administration of various levels, bodies of self-organisation in all spheres of social life. Decisions can be best taken at the factory level, others again at the neighbourhood, local, regional, national, continental and finally at the world level. Global decision making would be all those decisions necessitating a redistribution of human and material resources to ensure the elimination of the ills of underdevelopment – hunger and disease. The second would cover priority allocation of genuinely scarce natural resources – those which could be depleted absolutely, and of which no minority of the human race has the right to dispossess the next generations; only the living population of the world in its totality has the right to decide here. The third would include everything affecting the natural environment and climate of the planet as a whole; all those processes which can pollute the air, the water and the land, destroying the ecological balance. Such an interconnected and conscious resource allocation, of coordinated planning and self-management, would be much more efficient than either a free-enterprise capitalist market economy or a State-controlled command economy. The workers are able to manage production.  Delegations of workers from the various factories, different industrial sectors will regularly be organised to have discussions with each other, exchange experience about production, discuss the quality of and problems with the products supplied by them, and so on. Planning is crucial. But planning cannot simply be left to experts and specialists. Let the working class operate industry.

The socialist revolution will usher in a new epoch in the history of mankind. We are living in the most industrialised and technologically advanced countries in the world. Socialism as a society is dedicated to the interests of the working people. The basic means by which society produces its wealth – factories, mines and farms – are transferred from private to common ownership, and exploitation eliminated. Socialism unleashes the creativity of the people, who are capable of tremendous progress when not toiling under a system of exploitation. Socialism replaces capitalism worldwide because it is economically superior and will provide a better quality of life for all people. Socialist planning means the allocation of resources according to socially established priorities instead of according to blind market forces and the rule of profit.