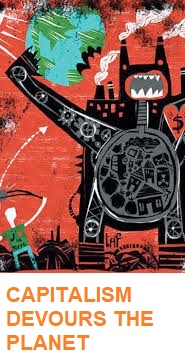 There is no question that capitalism is sending humanity towards environmental disasters. Things are only going to get worse, the experts say.

Capitalism doesn’t disappear if it camouflages itself green. Like Roosevelt’s New Deal of the 1930s, the Green New Deal aims to rescue capitalism not replace it with a series of legislation and regulation.

Reforms such as carbon trading in CO2 emissions won’t work. Proposing partnerships with “progressive” corporations and providing government subsidies and preferential tax treatment for clean-energy investments won’t work. Nor will insisting all government contracts must be green. The Left places too much of its faith in State plans and incentives offered to industry to de-carbonise, trusting that private business will welcome such state intervention and not be aware of the threat to the privileges of its private investors. The State is not class-neutral but the executive committee of the whole of the capitalist class. Attempting to reform the unpleasant parts of capitalism while production for profit remains can only lead to failure. We need to start producing for human needs in a global way. This means overturning this insane system.

People are deeply concerned about this situation and want to do something about it. Environmental destruction can be stopped but this means confronting capitalism. We need to confront the system as a whole, not simply bits and pieces of it. How much more time is to be wasted before it is accepted that capitalist politicians are not just incompetent but incapable of solving the climate problems? Bandages are not cures. Supposed solutions as only short-term temporary fixes, unable to get us out of the crisis. Geo-engineering remedies are at best a desperate and potentially disastrous measure of last resort. Geo-engineering projects open up all sorts of cans of worms with unintended consequences. There is no capitalist knight in shining armour riding to rescue us, no political hero proclaiming the Green New Deal can save us. Global industry is not organised to serve us; it is organised to generate profits for business.

People have marched and demonstrated against the many institutions of capitalism. However, we must avoid the trap of promoting a series of campaigns that target only the policies of the government and individual corporations. We must use these protests to build an anti-capitalist movement or run the risk of exhausting our energies in a noble but futile effort. We still have time to build such a movement and demand such action, but not much time is left. We need to abolish and get rid of capitalism.

Our goal is the elimination of the economic system based on profit and the creation of a democratic system based on equality, justice and sustainability. The system of capitalist production and the necessity of accumulation is fundamentally incompatible with a sustainable relationship between humanity and the eco-spheres. We put forward a socialist vision of the future that we hope will form the basis of a popular mass movement. We do not propose a series of reforms that will not abolish the market.