Why The Socialist Party is Unique 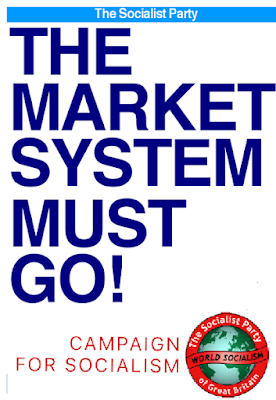 Class struggle without any clear understanding of where you are going is simply committing oneself to a never-ending treadmill. This is where the Leninist Parties go wrong. They think mechanistically that a sense of revolutionary direction emerges spontaneously out of "the struggle" thus circumventing the realm of ideology - the need to educate. It does not. The workers can never win the class struggle while it is confined simply to the level of trade union militancy; it has to be transformed into a socialist consciousness. Conversely, socialist consciousness cannot simply rely on its own increase in ideological persuasion. It has to link up with the practical struggle. The success of the socialist revolution will depend on the growth of socialist consciousness on a mass scale and that these changed ideas can only develop through a practical movement.

First, let us begin with the structure and organisation of the Socialist Party. In keeping with the tenet that working-class emancipation necessarily excludes the role of political leadership, it is a leader-free political party where its Executive Committee is solely for housekeeping administrative tasks and is not permitted to determine policy or even submit resolutions to conference (and all the EC minutes are available for public scrutiny with access on the web as proof of our commitment to openness and democracy). All conference decisions have to be ratified by a referendum of the whole membership. The General Secretary has no position of power or authority over any other member being the person elected to perform day-to-day duties. Despite some very charismatic writers and speakers, no individual personality has held undue influence over the Socialist Party. The longevity of the Socialist Party as a political organisation based on agreed goals, methods and organisational principles and which has produced without interruption a monthly magazine for over a hundred years through two world wars is an achievement that most left-wing organisations have only aspire towards.

Presently, the sole purpose of the Socialist Party is to argue for socialism and put up candidates to measure how many socialist voters there are. We await the necessary future mass socialist party as impatiently as others and do not claim for ourselves the mantle of being or becoming that organisation. Our function is to make socialists, to propagate socialism, and to generally indicate to fellow workers that they must achieve their own emancipation. We do not declare: “Follow us! Trust us! We shall free you.”

No, Socialism must be achieved by the workers acting for themselves. We are unique among political parties in calling on people NOT to vote for them unless they agree with what they stand for.

"... if we hoped to achieve Socialism ONLY by our propaganda, the outlook would indeed be bad. But it is capitalism itself, unable to solve crises, unemployment and poverty, engaging in horrifying wars, which is digging its own grave. Workers are learning by bitter experience and bloody sacrifice for interests not their own. They are learning very slowly. Our job is to shorten the time, to speed up the process." - Socialism or Chaos pamphlet

This socialist majority will elect socialist delegates to whatever democratic institutions exist (and these may be soviets or workers councils in some places), with the sole objective of legitimately abolishing capitalism.

Concerning the hostility clause,(It only commits the Socialist Party to oppose all other political parties, defined as organisations that contest elections and/or make demands on governments to enact reforms), there needs to be only one working-class class party and that this must be opposed to all other parties which can only represent sections of the owning class and if there were two groups of organised socialists, with more or less the same principles, then it would be their duty to try to unite to further the coming into being of the single "ideal" socialist party, opposed to all others, mentioned in Clause 7. They would both want socialism; they would both favour democratic revolution to get it; they would both be democratically organised internally; they would both repudiate advocating or campaigning for reforms of capitalism. There would no doubt be differences over tactical questions (which presumably would be why there were two separate organisations), such as over the trade union question, the attitude a minority of socialists should adopt in parliament, even over whether religion was a social question or a private matter. But it would be the duty of the two groups to find a solution to this and form a single organisation. Our view is that it is the winning of political control that is more important and that is why we emphasise this.  The Socialist Party stands by its analysis that we should use Parliament, not to try to reform capitalism but for the purpose of abolishing capitalism and that at the same time, the working class will also be organising itself, at the various places of work, in order to keep production going. The case of the primacy of political action has always been prominent in our arguments. We say that the capitalist’s legitimacy comes from their ‘democratic’ rule, so we believe that the capitalist’s legitimacy can be totally be broken by taking a majority in Parliament. But “capturing” Parliament is only a measure of acceptance of socialism and a coup de grace to capitalist rule. The owning class has a supreme weapon within its grasp: political power, – control of the army, navy, air and police forces. That power is conferred upon the representatives of the owners at election times and they, recognising its importance, spend large amounts of wealth and much time and effort to secure it. In countries like Britain the workers form the bulk of the voters; a situation the employers are compelled to face and deal with. Hence the incessant stream of opinion-forming influences which stems from their ownership and control of press, radio, schools to influence the workers to the view that capitalism is the best of all possible social forms. And that only political groups who accept this view are worthy of workers votes. It is the Achilles heel of capitalism and makes a non-violent revolution possible. Therefore, the first, most important battle is to continue the destruction of capitalism’s legitimacy in the minds of our fellow workers. That is, to drive the development of our class as a class-for-itself, mindful of the fact that capitalism is a thing that can be destroyed and a thing that should be destroyed. They must withdraw their consent to capitalism and class rule.

In 1904 the Socialist Party raised the banner for such a single, mass socialist party and proclaimed itself as the basis or embryo of such a party (Clause 8). Not only did the working class in any great numbers not "muster under its banner" but neither did all socialists. So we were left to be a small propagandist advocacy group but still committed to the principles set out in our declaration of principles. But we have never been so arrogant as to claim that anybody not in our organisation is not a socialist. There are socialists outside it, and some of them are organised in different groups. That doesn't mean that we are not opposed to the organisations they have formed, but we are not opposed to them because we think they represent some section of the capitalist class. We are opposed to them because we disagree with what they are proposing the working class should do to get socialism, and for them, of course, the opposite is the case too, they're opposed to what we propose. Nearly all the others who stand for a class-free, state-free, money-free, wageless society are anti-parliamentary. For ourselves, using the existing historically-evolved mechanism of political democracy (the ballot box, parliaments) is the best and safest way for a socialist-minded working-class majority to get to socialism. For them, it's anathema. For ourselves, some of the alternatives suggested (armed insurrection, a general strike) are also an anathema. We shall all present our respective proposals for working-class action to get socialism and, while criticising each other's proposals, not challenging each other's socialist credentials (engaging in comradely criticism). In the end, the working class itself will decide what to do.

At a later stage, when more and more people are coming to want socialism, a mass socialist movement will emerge to dwarf all the small groups and grouplets that exist today. In the meantime, the best thing we in our party can do is to carry on campaigning for a world community based on the common ownership and democratic control of the Earth's natural and industrial resources in the interests of all humanity. We will continue to propose that this be established by democratic, majority political action; the other groups will no doubt continue to propose their way to get there. And we'll see which proposal the majority working class takes up.

It's not us. a handful of socialist/anarchist activists, today who're going to establish socialism, but the mass of people out there. Until they move, we're stymied. Until then we agree to disagree. Those who want to argue that such a society should be established through democratic majority political action based on socialist understanding, and who want to concentrate on arousing this, will join the Socialist Party. Those who will argue that it will come about some other way will join some other group. And while at the same time addressing ourselves to non-socialists we should also keep on discussing with each other. We accept what Anton Pannekoek once said:

'If...persons with the same fundamental conceptions (regarding Socialism) unite for the discussion of practical steps and seek clarification through discussion and propagandise their conclusions, such groups might be called parties, but they would be parties in an entirely different sense from those of to-day'.