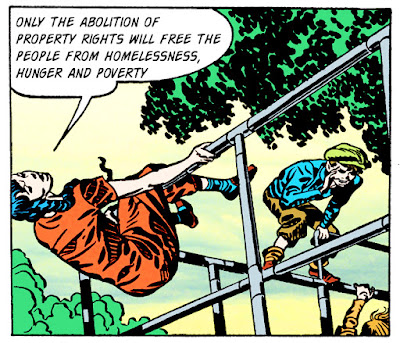 Under capitalism, the workers always get the thick end of the stick. In some circumstances, the workers can use the weapon of strike action to defend their standards of living and even raise them. The only way the workers can bring about a lasting and worthwhile improvement in their conditions is to abolish capitalism and create, in its place, a socialist society.

A larger part of their own surplus-product, always increasing and continually transformed into additional capital, comes back to them in the shape of means of payment, so that they can extend the circle of their enjoyments, can make some addition to their consumption fund of clothes, furniture, etc., and can lay by small reserve funds of money.

But just as little as better-clothing, food, and treatment and a larger pecullium (Pecullium: pocket-money given to slave by master), do away with the exploitation of the slaves, so little do they set aside that of the wage-worker.

“A rise in the price of labour, as a consequence of accumulation of capital, only means, in fact, that the length and weight of the golden chain the wage-worker has already forged for himself, allow of a relaxation of the tension of it.” (Karl Marx,“ Capital,” Vol. 1)

Production is not carried on for the purpose of meeting people’s needs. The aim of production is to so arrange it that a profit is made in order that shareholders and bondholders may draw their dividends without needing to work. Hence the haves and the have-nots—the workers and the capitalists—those who must sell their physical and mental energies in order to get the wherewithal to meet their needs and those who can meet their needs without having to sell their energies.

Production today is for the market, and conditions in the market determine how, when, where and if a portion or all of the product will be sold. Conditions in the market can bring prosperity, financial difficulty, or even ruin to many producing concerns as crises of the past have borne witness. If one type of goods is produced too much in excess of what the market can absorb the competition to find buyers leaves some losers in the struggle, which appears to be what is happening in some industries to-day, like the motor industry. If the unsold surplus is large, or if there is an anticipation that this is going to happen, then there is a cut in production and workers are discharged. The strange part of it is that there can be a large unsold surplus of the very things that the mass of people are sorely in need of but cannot buy because of their limited resources. With only their wages to depend upon the workers are always on the side that loses when these troubles come.

Inflation is not the cause of poverty, though governments precipitate trouble by debasing the currency and issuing insufficiently backed current notes in the vain hope of getting out of financial difficulty—or just through plain ignorance.

Money is the medium of market dealings and products must be turned into money before profit, the object of market dealings, can be realised. Thus there is no way out of the crazy dilemma whilst buying and selling continues to be the means of transferring the product to the consumer. Whilst the means of production are privately owned by an individual, a company, or a State concern buying and selling will still go on. The answer, then, is to abolish this private ownership and substitute for it the common ownership of the means of production and distribution. When this is done human needs and not profit will be the aim of production and money, and all the evils associated with it, will disappear.

Political action is an absolute necessity to achieve socialism. This requires that socialists shall send their delegates to parliament and the local councils for the purpose of achieving socialism. It does not mean that parliament can impose socialism on a non-socialist electorate, or induce a non-socialist electorate to accept the socialism that they do not want or understand. The Socialist Party has no members in parliament only because there are too few socialists to send them there.

The Socialist Party does not support leadership. The essence of leadership is the implication that the workers can safely entrust their affairs, including their position under capitalism and the achievement of socialism, to elected or self-appointed individuals who will in their wisdom decide what to do and how to do it. The assumed justification for leadership is that the rank and file do not properly understand what are the problems and how they should be tackled. This is indeed true and will remain so until the workers become socialists and understand that their urgent need is socialism. Then they will know exactly what to do and will instruct their delegates accordingly. In the meantime the mass of the workers do not understand; but what of the labour leaders? What do they know of capitalism or socialism? And what difference would it make if they did have knowledge, since their continuance as leaders would depend upon suiting the lack of knowledge of their own followers?

The workers have so far always trusted in leaders. It has brought them lots of wars and other evils but no socialism; only the continuance of capitalism.

We don’t think a socialist party should seek passive support from people on the basis of what it would do for them if they voted for it. In fact you would seem to be more committed to the so-called “parliamentary road to socialism”—a majority of socialist MPs voting in socialism for a passive majority outside—than we would be. This is not how we see socialism coming about. Socialism is something people must do for themselves, organising themselves consciously and politically to establish it and actively participating in the movement. They alone can establish socialism using parliament with the socialist party merely an instrument to this end.

This is why we limit ourselves today to carrying out general agitation against capitalism and for socialism. We fully accept, however, that when the “critical mass” of socialists has been reached, people will be discussing all the issues you raise and working out detailed plans about how to tackle them once capitalism has been ended. But even then it won’t be a question of the socialist party presenting them with a programme for them to vote for, but of them democratically deciding for themselves, via the socialist party and other bodies such as trade unions, professional associations and neighbourhood committees, what the practicalities of establishing and running socialism in its first days should be.

Of course the relatively few of us who are socialists today do have our ideas on how education, transport, health services, etc might, and even should be, organised in a socialist society, but this is all they can be at the moment: ideas and suggestions. This is because the exact details will have to be decided by the people around at the time, most of whom are not yet socialists and who might, and probably will, have different ideas from us on the details of some of these issues.

We have, in fact, produced a pamphlet called Socialism As A Practical Alternative which does spell out some of the possibilities of socialism, particularly as regards possible institutions of democratic control and ways of organising the production and distribution (we prefer this word to “exchange” which has connotations of buying selling) of goods is a moneyless context. You should read it. We’ll be pleased to send you a copy for 80p (post paid).

As to leaflets, we’re sending you a selection. Please let us know which, and how many, you’d like. We’re also sending some stickers for your car.

The Socialist Standard is not written by professional journalists but by ordinary people who have a day job too. If we don’t publish our photos this is because the Socialist Party does indeed not believe in leaders or the cult of personality, but also because they are not just expressing personal views but are writing on behalf of the membership as a whole.