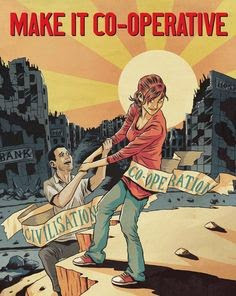 What is the basis of present-day society?  This is called a "property-owning democracy" where 10% own 90% of the wealth. There is a constant conflict of interests between this minority and the vast majority whom they employ to produce profit for them. The minority accumulate all wealth produced over and above the wages on which workers survive. Capitalism is based on a fundamental class division between owners and producers.

An employer who spends £100 on materials and machinery in a week, and £100 on a wage to a worker, then accumulates all the surplus value that is produced. By mid-week, the worker has created £200 worth of saleable commodities, thus covering the employer’s costs. But the worker must continue, and all that is created during the rest of the week is surplus value, which serves to increase the capital of the capitalist class. This is the legalised robbery on which present-day society is based. The talk of democratic rights means little more than that we delicately forge for ourselves the very chains that bind us.

What, then, is the sanity praised by defenders of the global profit system? Adam Smith’s magical “invisible hand” of market forces is now somewhat different from what it was in the eighteenth century. Markets today are no longer small, local, or self-contained but international. The buying and selling system has come to dominate the entire world over the past two hundred years. However it is reformed or modified, from the Kremlin to the White House, the market cannot be made to serve real human interests, the needs of humanity as a whole. The only demand that the profit system can ever recognise is that which is backed up by cash. The capitalist slogan is profit before the needs of the majority.

What does the Socialist Party want?
We want the working class to put the wealth of society, and the machinery for producing that wealth, in the hands of society as a whole. This is the practical alternative to the market system which currently exists throughout the world. Where people are in need of housing, socialist society will re-organise resources to build houses — not for sale and profit but for use. “Insane!" scream the conservatives who defend the capital of the minority. But look at the present “sanity”: human needs are no less now than they were in the past, and yet there has been a massive reduction in the production levels of most major industries, in response to the dictates of profit and the market.
There is only one alternative to the fatal destructiveness of competition, and that is the creativeness of co-operation. The establishment of a system of production solely to satisfy human needs across the globe, rather than for profitable sales in the world market, is more urgently needed than ever. Democratic control of society will be the culmination of a long history of class conflict and will be able to resolve all the contradictions which arise out of the class division in society. It is in the interests of workers everywhere to dismiss the complacent. flippant cries of panic coming from those who are either rich enough or, more likely, sick enough, to want to conserve a “civilisation” founded on poverty, violence and war. The profit system can only offer us prolonged frustration, interrupted by the occasional hysteria of mass slaughter when wars are fought over the spoils of international capital.
Common ownership of the world’s resources will represent the most compelling and exciting step humanity has taken. To hold back that step is to invite the trade cycle to dominate our lives, imposing its alien forces and needs on the daily lives of the entire population. When you next hear somebody trying to defend the profit system, remember it is all about a new form of insanity. Because when you hear the political rhetoric which praises the magic of market forces, with all references to the starvation and destruction which are produced by those forces neatly edited out, you might just feel tempted to contract the disease of democracy and to stand for the sane alternative.
By ajohnstone at August 03, 2022