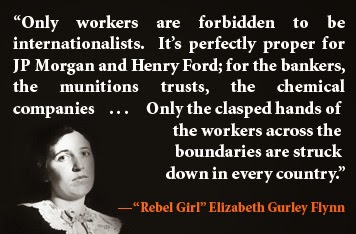 We think that a traditional socialist May Day should be celebrated by having a picnic and a good time. It's a day that reminds us that the oppressive capitalist system is to be followed by socialism, which is parallel to the idea that the harshness of Winter is followed by Summer. May Day had become deeply embedded in the consciousness of the workers. May Day is our day. The Red Flag is our flag.

The capitalist class is desperately striving to force working people to pay for the worldwide economic, social and ecological crises it has created. Around the world, the governments that are run by and for the rich are escalating their attacks against our fellow workers. In their insatiable quest to maximise profits, the employers and their state crush everything that stands in their way. We must dare to struggle and dare to win. Reject the divisions fomented by the ruling class and unite and fight.

There is a Better Way.  Revolution is the Way
Even though, on this day the Socialist Party is too small to take to the streets, it represents the liberating ideas of the struggle for socialism. What is our vision for a socialist tomorrow?
• Work and leisure in a society of shared abundance
• A renaissance of art and culture
• A world in harmony with nature

This new world has a name: socialism, the complete reorganisation of all aspects of social, economic and political life. This new world will not happen by itself; it will come from a revolution that is the overthrow our masters by the ourselves alone. We have the ability to run the society; in fact, without us, they would be nothing.

The World Needs Socialism!
Socialism Requires Revolution!
The Revolution Needs Us!
By ajohnstone at May 01, 2015 No comments: Links to this post

Email ThisBlogThis!Share to TwitterShare to FacebookShare to Pinterest
Labels: May Day 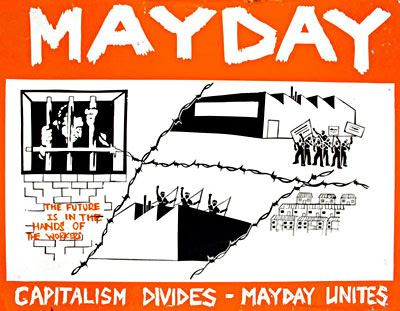 SPGB members and sympathisers will be out and about at the Mayday rallies in Edinburgh and Glasgow this coming weekend, distributing Socialist Standards and leaflets .

Details of Sunday's Glasgow Mayday Rally here
Mayday belongs to the workers – we have a world to win, and we can win it.
By ajohnstone at May 01, 2008 No comments: Links to this post

Edinburgh and Glasgow May Day Rallies

The 2007 Edinburgh May Day march and rally will be on Saturday May 5th . Assemble East Market Street 11.30 am . Rally in Princes Street Gardens (West End) 1 pm .

On Sunday May 6th , in Glasgow , the traditional May Day Rally will take place . Participants should assemble in George Square at 11am. The rally will leave for the City Halls and Old Fruitmarket at 11.30am for speeches at 1.15pm .

The Socialist Party will be in attendance at both events , busily handing out leaflets and distributing free copies of the May issue Socialist Standard and we will also have a literature stall , stocked with books and pamphlets .

Seek us out . We are always happy to discuss the Party's case for Socialism .
By ajohnstone at April 30, 2007 1 comment: Links to this post 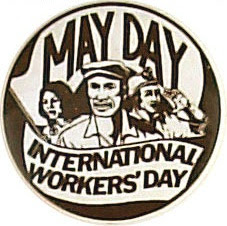 The First of May is the day when the workers’ movement celebrates its internationalism, and affirms the unity of their class across all borders .

In 1884, the Federation of Organized Trades and Labor Unions passed a resolution stating that eight hours would constitute a legal day's work from and after May 1, 1886. The resolution called for a general strike to achieve the goal, since legislative methods had already failed. With workers being forced to work ten, twelve, and fourteen hours a day, rank-and-file support for the eight-hour movement grew rapidly, despite the indifference and hostility of many union leaders. By April 1886, 250,000 workers were involved in the May Day movement.
By May 1st, the movement had already won gains for many Chicago clothing cutters, shoemakers, and packing-house workers. But on May 3, 1886, police fired into a crowd of strikers at the McCormick Reaper Works Factory, killing four and wounding many. Anarchists called for a mass meeting the next day in Haymarket Square to protest the brutality.The meeting proceeded without incident, and by the time the last speaker was on the platform, the rainy gathering was already breaking up, with only a few hundred people remaining. It was then that 180 cops marched into the square and ordered the meeting to disperse. As the speakers climbed down from the platform, a bomb was thrown at the police, killing one and injuring seventy. Police responded by firing into the crowd, killing one worker and injuring many others.
Although it was never determined who threw the bomb, the incident was used as an excuse to attack the entire Left and labor movement. Police ransacked the homes and offices of suspected radicals, and hundreds were arrested without charge. Anarchists in particular were harassed, and eight of Chicago's most active were charged with conspiracy to murder in connection with the Haymarket bombing. A kangaroo court found all eight guilty, despite a lack of evidence connecting any of them to the bomb-thrower (only one was even present at the meeting, and he was on the speakers' platform), and they were sentenced to die. Albert Parsons, August Spies, Adolf Fischer, and George Engel were hanged on November 11, 1887. Louis Lingg committed suicide in prison, The remaining three were finally pardoned in 1893.
In 1889 , the first congress of the Second International called for international demonstrations on the 1890 anniversary of the Chicago protests. These were so successful that May Day was formally recognized as an annual event at the International's second congress in 1891.
In 1904 , the International Socialist Conference called on "all Social-Democratic Party organizations and trade unions of all countries to demonstrate energetically on May the First for the legal establishment of the 8-hour day, for the class demands of the proletariat, and for universal peace.
May Day has come again. Let it be an occasion of fresh resolve. There are many who are with us but not of us. The struggle for Socialism is a long and arduous one, needing the help of every class-conscious man and woman. On this day, then, we urge the need to work for Socialism ...
...May Day is workers' day, the day of our class. However hollow the cries and futile the demonstrations, it remains the anniversary of protest, a continual reminder of exploitation and, subjection. “Class” is the reason and the theme of May Day – class in its fullest, truest sense. The working class is not the labourers or the artisans or the machine-minders: it is all people to whom wages are life. The working class is international: so is its cause. Among the cries and chants and slogans of May Day, only one has meaning:
“Workers of all countries unite!”
Socialist Standard May 1955
By ajohnstone at April 30, 2007 No comments: Links to this post