New research suggests long stints of unemployment can have long-term effects on personality traits, changes that may become near-permanent.

It's accepted knowledge that unemployment can have negative psychological consequences. Not only is a person's job status is not only often tied inextricably to a person's self-worth, but it's the life jacket that keeps the rising tides of poverty at bay. But how does unemployment affect the psyche long-term?

researchers found that men who spent several years looking unsuccessfully for work tended to demonstrate higher levels of "agreeableness" during their first two years of unemployment. Agreeableness is one of the Big Five personality traits identified by psychology's five-factor model (FFM) -- along with openness, conscientiousness, extroversion and neuroticism. The testing showed after an uptick in agreeableness during the first two years, men's agreeableness levels began to quickly slump, with long-term agreeableness levels consistently lower for unemployed men than for those with jobs.

"In early unemployment stages, there may be incentives for individuals to behave agreeably in an effort to secure another job or placate those around them," the researchers wrote in the new study, published last week in the Journal of Applied Psychology. "But in later years when the situation becomes endemic, such incentives may weaken."

Men who spent longer amounts of time without a job also demonstrated ebbing levels of conscientiousness and openness.

"The results challenge the idea that our personalities are 'fixed' and show that the effects of external factors such as unemployment can have large impacts on our basic personality," Christopher J. Boyce, a psychologist at the University of Stirling, in Scotland, explained. "This indicates that unemployment has wider psychological implications than previously thought."

By ajohnstone at February 24, 2015 No comments: Links to this post

Only human nature, ain't it?

Human nature is something that ordinary people have very badly – which is why we need tough laws.  All the ills of present-day society are attributed to the imperfection of human nature. This is what we are taught.

Marx explained that "each new class which puts itself in the place of the one ruling before it, is compelled, simply in order to achieve its aims, to represent its interest as the common interest of all members of society i.e. ..to give its ideas the form of universality and to represent them as the only rational and universally valid ones". Ideas become presented as if they are universal, neutral, common sense. However, more subtly, we find concepts such as freedom, democracy, liberty or phrases such as "a fair days work for a fair days pay" being bandied around by opinion makers as if they were not contentious. They are, in Marxist terms, ideological constructs, in so far as they are ideas serving as weapons for social interests. They are put forward for people to accept in order to prop up the system. Ideas are not neutral. They are determined by the existing relations of production, by the economic structure of society. Ideas change according to the interests of the dominant class in society. 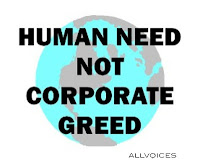 Human nature has always been invoked every time there has been any question of social progress. The slave-holders said some people were born to be slaves. The slave was a possession of the slave owner and only lived and worked for his benefit. The master had full control of the life and family of the slave. The owner was everything, the slave nothing. It was the natural order of things.

Capitalism has been responsible for a great deal of human suffering. Concentration of wealth and property, exploitation of labour, the abuse of nature for profit, the violent suppression of opposition, the manipulation of democracy and control of information, surpluses of food and medicine for the rich while millions of the poorest die of malnutrition and disease. Supporters of capitalism, however, insist that “human nature” creates the ills associated with the present system – greed, competition, war, inequality. Socialists declare it is not “human nature” that is the cause of the problems people face today. It is the way society is organised

Opponents of socialism say that we are not being practical: that we are dreamers and utopians. Our opponents confront us again with human nature and say; “You want to change society to ensure happiness to all and give everyone equality. You forget human nature! Man is by nature selfish and evil. You will never be able to change people.”

Socialists do not believe that there is no such thing as the nature of man; that man at birth is like a blank sheet of paper, on which the culture writes its text. Socialists are never tempted to assume that "human nature" is identical with that particular expression of human nature prevalent in their own society. Socialists do not accept that there was a fixed, eternal "human nature". In human society nothing is unchangeable. Everything is variable. Human nature is strongly shaped by the society it exists in and does in fact vary from one society to another. Through history classes and social systems have succeeded each other and differed from each other. It is a mistake to maintain that human nature does not change. Everything changes in Nature and in life. Everything is in a process of transformation. Movement is the universal law of everything that exists. We never meet the same person twice because during the interval they have grown older, their constitution and character changed; they is no longer the same. If everything changes, is subject to transformation and modification, how is it possible to believe for a moment that the present system of property will always remain the same? That would be, indeed, contrary to nature.

The satisfaction of human needs is impossible for an isolated individual. Only by taking part in the collective production process, working alongside everyone else to produce what we all require, can an individual become truly human. It has also been said that if men do not have the spur of hunger and want and of the desire to make profit they will become lazy. To argue this is to forget the necessity for clothing, feeding and sheltering oneself. Who does not work neither will they eat. It is to forget too, that idleness is not the characteristic of a sane person.

Laziness is a social malady, spawned by our system, which is in itself a stimulus to laziness. It assures all riches, all the pleasures of life to those who work the least possible - the idle rich parasites. Laziness also develops from the intolerable conditions of forced and excessive labour in unhealthy factories. How can people work with enthusiasm when they know that their work will go to the enrichment of others? When the producers know that the products of their work will belong to them they will throw overboard the old repugnance which forced drudgery engenders in them. Work well regulated and fairly apportioned will become attractive. It will become a joy and a pleasure, and this is because work is necessary for the physical and mental well-being of the individual. Altruism/co-operation/communism, call it as you will, is basically the "we" and the "us" versus the egotistical bourgeois, "I" and the "me". "All against all" would properly express capitalist values.

Socialism does not depend on some miraculous change in human nature. Thirsty men will fight tooth and nail for a drink of water in a desert. But if they are up to their waist in water they may have a thousand differences among themselves, but they will not even dream of fighting for a drink. A dozen men in a prison cell with only one tiny window may trample over each other in the fight to get to that tiny source of fresh air. But outside, who ever thinks of fighting for air to breathe, or for more air than the next man? Announce a shortage of bread, and immediately a long line will form, with everyone racing to get there first. But if everyone knew that there is an ample supply of bread today, and there will be just as large a supply tomorrow and the next day, there would be no line, no race, no conflict; nobody would try to hoard an extra loaf in order to make sure of eating the next day. If society could assure everyone of as ample and constant a supply of bread as there is of air, why would anyone need or want a greater right to buy bread than his neighbor? Bread is used here only as the simplest illustration. But the same applies to all other foods, to clothing, to shelter, to transport.

Capitalism cannot exist without the working-class. It is the working-class which sets in motion the machine. As soon as the proletariat becomes conscious of this fact it will begin to revolt against a state of things. Socialism is very simple. A small minority of rich people exploit the mass of poor people, those who produced the wealth of the world. If we, the vast majority, got ourselves organised, we can take the wealth into our hands, along with the means to produce it. Then with rational planning all major problems of social life can be resolved to the satisfaction of all.

A total of 2,025,400 people had put their names forward for the NHS Organ Donor Register as of 31 March - almost 40% of the population. Across the UK, the number of people on the organ donation register stands at 30%.

Three people in the UK die every day because of a lack of access to organs. The Scottish government also said the number of people who died while waiting for organs fell from 38 in 2010-11 to 36 in 2011-12. The tragic fact is that more than 600 people in Scotland are still waiting for a life-saving transplant.
By ajohnstone at April 15, 2012 No comments: Links to this post

Millions of pounds spent each year on the sperm of race-winning horses. The owner of one superstar stud can earn £25 million a year. British breeders can typically expect to pay more than £500 a time in stud fees, with some American horses commanding fees of up to £10,000. Stallions reputed for producing good quality offspring come at a premium, and can fetch far higher fees.

Research published today will cast doubt on the rationale that bringing champion horses together will produce potentially race-winning foals. a horse's lineage is far less important than was previously thought. Genes account for only 10% of the prize money a horse wins in its lifetime

"The offspring of expensive stallions might tend to win more money, but not necessarily because they have inherited the best genes . It is likely those breeders best able to pay high stud fees are also those who are able to spend more on care of the horse, how it is trained, and who rides it - all of which will contribute more to how much it will win."

We in the socialist movement have been arguing that what genes determine in humans are the physical characteristics and the capacities of the brain, but not the actual behaviour and behaviour patterns . In other words, human nature is one thing, human behaviour another.

It makes horse sense .
By ajohnstone at December 19, 2007 No comments: Links to this post