Marx and Engels on the power of the vote 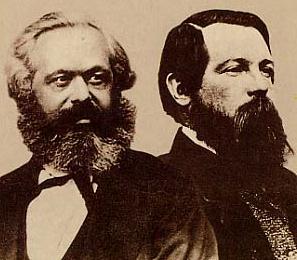 It's often pointed out that our political system is completely corrupted by money yet history teaches that people's influence on their governments is much more powerful than we usually imagine. It's weakened primarily by people's failure to do anything and the mistaken belief that we don't have the power to shape the world as we wish it to be.


Marx and Engels strongly supported political action in the sense of participating in elections. They stressed the importance of the vote. Engels explains that universal suffrage "in an England two-thirds of whose inhabitants are industrial proletarians means the exclusive political rule of the working class with all the revolutionary changes in social conditions which are inseparable from it." Marx argued along the same lines, for example, in 1855, he stated that "universal suffrage . . . implies the assumption of political power as means of satisfying [the workers'] social means" and, in Britain, "revolution is the direct content of universal suffrage."

In 1852 Marx wrote, concerning the Chartists:

“But universal suffrage is the equivalent of political power for the working class of England, where the proletariat forms the large majority of the population, where, in a long though underground civil war, it has gained a clear consciousness of its position as a class and where even the rural districts know no longer any peasants, but only landlords, industrial capitalists (farmers) and hired labourers. The carrying of universal suffrage in England would, therefore be a far more socialistic measure than anything which has been honoured with that name on the continent. Its inevitable result, here is the political supremacy of the working class.” [Marx emphasis]
His meaning is clear - a working class majority in Parliament, backed by a majority of the population, can bring about the real transfer of power. 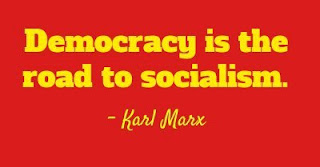 What is democracy? We can do no better than use the familiar explanation “It is the rule of the people, by the people, and for the people.”


When the Athenians talked about demokratia, “rule by the people” (the dêmos) they did not just mean the election of “representatives”, to rule on behalf of the electors, but actual, direct rule by every citizen. An Assembly, which actually took decisions, voted on all major issues, passed laws and voted on foreign policy. When it met, about once a week, every citizen could have his say, speaking for as long as he liked – until people got bored with his speech and pulled him off the platform.

From the study of history it is found that the public assembly of all the citizens made all important decisions. They organized the administration of the state, appointed officials and kept check on them. The public assembly of all the citizens was the government. The vast majority of officials were chosen by lot which amounted to putting names into a hat and appointing the ones whose names came out. Not only did the Athenians choose all officials by lot, they limited their time of service. When a man had served once, as a general rule, he was excluded from serving again because they believed in rotation, everybody taking his turn to administer the state. The Athenian assembly appointed a council of 500 to be responsible for the day-to-day administration of the city and the carrying out of decisions. Athens had very few permanent functionaries. They preferred to appoint special boards of citizens. Each of these boards had its own very carefully defined remit and were co-ordinated and overseen by the council.

Politics was not the activity of your spare time, nor the activity of experts paid specially to do it. A person who did not take part in politics was an idiotes, from which we get our modern word idiot. How would today’s politicians feel if it was suggested that any worker selected at random could do the work that they were doing, and that it should not be treated as career but yet that was the guiding principle of Greek democracy, one of the greatest civilization the world has known. (Albeit one where women and slaves were not given the same accord as the free male citizens.)

Nor was the democratic system something that arose and was established overnight. Like our own world Greece possessed a landed aristocracy who dominated the economy and held all the important positions of government. For example, rich and powerful noblemen, for centuries, controlled a body known as the Areopagus that held all the powers and which later were transferred to the council. The magistrates in the courts were a similar body of aristocrats who functioned from above with enormous powers such as modern magistrates and modern judges have. The merchants made a bid for power. Democracy had to be won and protected. The struggle was continuous. The old aristocratic class and some of the wealthy made attempts to destroy the democratic constitution and institute the rule of the privileged. They sometimes had temporary success but were always ultimately defeated. In the end, the democracy was defeated by foreign invasion and not from the inside.
Naturally some detested the system, particularly the intellectuals. Plato, Aristotle and Socrates thought that government should be by experts and not by the common people. To-day similar philosophers claim large modern communities are unsuitable for such a form of government and there is a need for a professional bureaucracy. Yet the fundamental belief of our justice system is the jury-system, men and women selected from the electoral roll to hear the arguments for and against and decide upon the important issue of innocence and guilt of another person which at one time could be a matter of life and death.

In to-day’s society, democracy is a fraud in the sense that it uses democratic forms to frustrate genuine democratic control from below. Marx described the United States as “the model country of the democratic swindle” not because there was less democracy but for precisely the opposite reason. The fact that the US had developed the formal structure of the constitutional republic which meant that its ruling class had also developed the art of keeping the expression of popular opinion within acceptable channels, satisfactory to its own class interests with a plethora of clever electoral rules devised to insert a manipulative factor into the forms of a more or less universal suffrage, beginning with the American Constitution, then the “Jim Crow” laws and by currently controlling a media system which permits the buying of public opinion.
Where there is democracy, there is inevitably insecurity for the capitalist ruling class. True democracy places power with people and in such circumstances the few who hold power become threatened. The “threats” to elite interests from the possibility of true democracy has always required to be neutralised by using educational institutions, religion , public relations and advertising agencies and , of course, all the various means of mass media, press, radio, tv and film. Political, economic, and cultural agencies all are employed to defend the principle of privilege. All have been used to protect the power of the wealthy from the potential of popular democracy. Modern democracy gives to the worker the right to choose his master. Yet the threat of democracy remains a constant, persistent and a pervasive danger to the capitalist class.

In socialism the task of organising and running production and the involvement in administering communities will be looked upon as those who lived in ancient Athens saw it, a necessary and important part of work, a part of everyday life. In fact, there will be no politics in the modern sense in that there will be no institution separate from the rest of social life. We should recall that the term “social democracy” was once an alternative name for socialism and socialists were at one time called “social-democrats”.