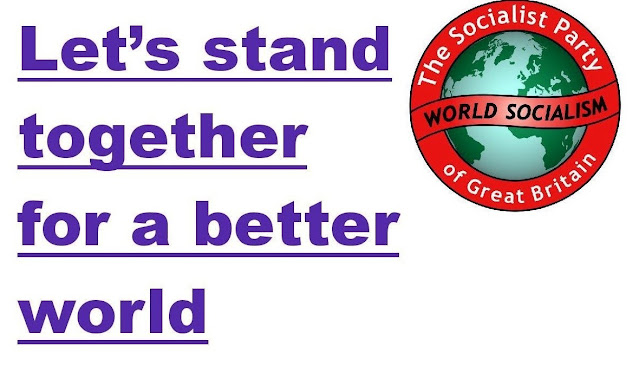 We are not so naive as to imagine that the changeover from world capitalism to world socialism will occur over a single weekend. The changeover can be envisaged as taking place over a relatively short period of time of, say, five years or so (we simply don't know.) Yet even before the full establishment of socialism people will have started to do what is needed to begin creating the new world. Local life will soon become largely self-administering and local plans will be devised to make the best alternative uses of buildings that no longer served their original purposes, such as banks and armament factories.

Communities able to grow their own food can very quickly become self-sufficient: food surpluses distributed elsewhere to areas of need without any requirement to pass through the intermediary of the market although later it will not be a question of communities passing on their surpluses to one another (most, if left to themselves, wouldn't have any surplus), it is a question of them being interlinked in a single network of production which in the end embraces the whole world.

Wider coordination will ensue. It is as well to be aware to what extent local communities are interconnected and interdependent and that this places severe limits on what needs could be met locally. The fact is that people in small communities aren't able to produce all they need or anything like it. The final stage of the production of a range of goods for everyday use could be done locally - food, clothes, shoes, furniture--as well as repairs but neither (most of) the raw materials nor (in most cases) any of the metals to make the tools and machines used in this final stage could be produced locally.

The community will ascertain what are the requirements of the people - anything and everything that the people desire. Food, clothing, housing, transport, sanitation — these come first; all effort will be to supply those first; everyone will feel it a duty to take some part in supplying these. Then will follow the adornments and amusements.

There will be a real sense of working together for a common goal - a true community. If you read people’s reminiscences of the Second World War or the Depression of the Thirties, you will find time and again the refrain, “Times were hard, but everybody pulled together.” It matters not how accurate these memories are; what is crucial is the way that cooperation and solidarity are seen as positive values, to be cherished and kept in the memory.

For real democracy: imagine a society where all the people would be of equal status, with equal, free access to resources owned by the community, as a whole (e.g. food, shelter, health-care, education, transportation, etc.).

Imagine a world with no leaders and no elite to lord it over us. A society where everyone can have an equal say in the issues that concern them. Above all, a world, in which all the people own and share the wealth that we need in order to live. The precise, day-to-day details of the running of this future society will be up to the people at the time, but what we can be sure of is that there will be open access to the administration of society for those interested in particular issues, such as food production, health, education, the building of houses, the environment and local matters. Immense satisfaction will be experienced by huge numbers of individuals as, on the one hand, they will be able to contribute their mental and physical energies into increasing the commonly held wealth of society, whilst on the other hand, they will satisfy their own self-defined needs from the common store.

"It's a nice idea but it will never happen" is one of the most common responses to the suggestion that it is in our interests to work towards building a socialist society. The assumption is that socialism will rely upon everybody being altruistic, sacrificing their own interests for those of others. In fact, socialism doesn’t require people to be any more altruistic than they are today. We will still be concerned primarily with ourselves, with satisfying our needs, our need to be well considered by others as well as our material and sexual needs. It is enlightened self-interest that will work for the majority. The coming of socialism will not require great changes in the way we behave, essentially only the accentuation of some of the behaviours which people exhibit today (friendliness, helpfulness, cooperation) at the expense of others which capitalism encourages (acquisitiveness, competition.)

Given the control of human affairs that a socialist system would bring, people in socialism would be able to take charge of their destiny. What is undeniable is that we are a species with great talents. In science, technology, art, crafts and design we can call upon a wide range of great skills. The point now is to release these for the benefit of humanity and a new era for humanity will have begun. Production for profit will have been confined to a barely-understandable and barbaric past.