Wage slavery or liberation from toil 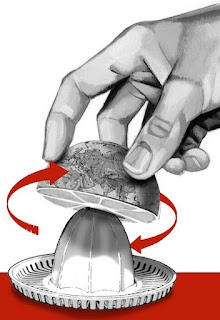 Overall real wages have scarcely budged in the 1990s in America, and earnings for college-educated workers actually declined by more than 6 percent. Productivity per person-hour increased by 5 percent between 2009 and 2010.

These days, workers are expected to be on call 24/7—24 hours per day, seven days per week. Seen in this light, innovations like flexi-time or working from home are in fact strategies to bring new sorts of workers—mostly women—into the job market and to subject them to a new set of (frequently electronic) rules and controls.

Think about it. Fifteen years ago, would you have taken a job if you had to be available every day, respond to messages from your boss late at night, and maintain contact with the office while on vacation?  But today just about any job, especially the good ones, exhibit precisely this oppressive 24/7 character. At the same time technology has redefined labor into assembly-line piecework and new gadgets have allowed our less inviting piecework tasks to follow us home, filling family time, distracting our leisure time. Innovative machines bind us more tightly to our jobs while forcing us to work longer hours.

Historian Jackson Lears said in a recent interview, “Whatever the color of your collar, your job may still be ‘proletarian’ to the extent that management controls the pace, process, and output of your work.”

Corporate executives urge a drive toward efficiency—efficiency that can be best defined as low wages. Technology in the workplace holds out the promise of more time, but as we have seen, increased productivity— more output; fewer hours—benefits only the bottom lines of corporate profits wrung from the decreased cost of labor. High-tech machines enable fewer workers to do more while transforming complex artisanal tasks into piecework. Americans love to shop for bargain commodities, of course, but corporations also shop for labor, and modern technology and communication force workers to compete with lower-paid counterparts in Singapore, India, and China. Even here in the United States, an auto assembly job that pays $28 an hour in Michigan will pay half that in South Carolina. The workplace is being transformed by technologies deployed by corporations in the pursuit of efficiencies, increased productivity, and increased profit. “Productivity Hits All-Time High” may be a pleasing headline to the employing class , but Less-in/More-out is scarcely good news for workers.

Automation not only displaces jobs but change the very character of work itself. This may result in the alienated working class taking revolt but, fearful and discontented, they may also well turn toward authoritarian, simple-solution demagogue leaders expousing contempt for democracy and nationalistic xenophobia. This is already happening in the United States where state legislatures are bearing down on workers' rights and immigrants.

Socialists have to counter with a real alternative to wage-slavery. John Ruskin wrote, “In order that people may be happy in their work, three things are needed. They must be fit for it. They must not do too much of it. And they must have a sense of success in it.”

Taken from here
By ajohnstone at December 03, 2012 No comments: Links to this post

Shift work has been associated with a host of health problems. The evidence is clear that getting enough sleep is important for health, and that sleep should be at night for best effect”

Shift workers getting too little sleep at the wrong time of day may be increasing their risk of diabetes and obesity, according to researchers. The team is calling for more measures to reduce the impact of shift working following the results of its study.

Changes to normal sleep meant the body struggled to control sugar levels. Some participants even developed early symptoms of diabetes within weeks.

Participants in the study started with 10 hours' sleep at night. This was followed by three weeks of disruption to their sleep and body clocks. The length of the day was extended to 28 hours, creating an effect similar to a full-time flyer constantly getting jet lag. Participants were allowed only 6.5 hours' sleep in the new 28-hour day, equivalent to 5.6 hours in a normal day. They also lived in dim light to prevent normal light resetting the body clock. During this part of the study, sugar levels in the blood were "significantly increased" immediately after a meal and during "fasting" parts of the day. The researchers showed that the hormone that lower levels of insulin - the hormone that normally controls blood sugar - were produced. Three of the participants had sugar levels which stayed so high after their meals they were classified as "pre-diabetic". They also highlighted a risk of putting on weight as the body slowed down. "The 8% drop in resting metabolic rate that we measured in our participants... translates into a 12.5-pound increase in weight over a single year," they wrote.

Dr Orfeu Buxton said: "We think these results support the findings from studies showing that, in people with a pre-diabetic condition, shift workers who stay awake at night are much more likely to progress to full-on diabetes than day workers. Since night workers often have a hard time sleeping during the day, they can face both circadian [body clock] disruption working at night and insufficient sleep during the day."
Socialist Courier has previously reported the risks of shift ork and this lqatest finding simply confirms that capitalism is bad for your health.
By ajohnstone at April 12, 2012 No comments: Links to this post

Citizens Advice Scotland (CAS) has called for a new body to be set up to protect workers from abuse and exploitation by bosses. In the past two years, Scottish citizens advice bureaux have handled 107,000 cases where people claimed to have been treated unfairly at work. CAS said it feared that could be the tip of the iceberg.

The Fair Employment report said one of the "key features" of the recession had been that "many employers retained staff on less generous terms and conditions rather than making large numbers of employees redundant". While it said this was "usually preferable" to redundancy, it claimed cutting workers' hours and wages could have a significant impact. The report stated: "As a result of the fragmented enforcement regime, our evidence shows that many employees are unable to raise and resolve poor practices that they experience at work. This leaves some employers free to continue inadequate and sometimes illegal employment practices."

CAS head of policy Susan McPhee said "It is time for the government to give exploited workers somewhere to turn, through the creation of a Fair Employment Commission with the legal powers and resources both to secure individual vulnerable workers their rights, and to root out the rogues. As a society we might have hoped that workplace exploitation was a thing of the distant past. Sadly, this report shows that many Scots are still being treated unfairly. Examples include illegal changes to contracts, unfair dismissal, low pay, withheld wages and victimisation of those who have tried to demand their rights."

Such good intentions but the government is the executive committee of the capitalist class and represents their interests, not the workers. A few cosmetic changes may be possible but the balance of power will always favour the employer.

By ajohnstone at February 06, 2012 No comments: Links to this post