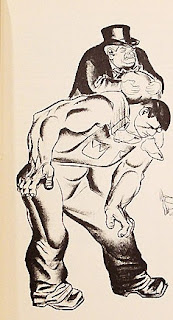 The highest-earning 300 bosses in the public sector saw their salaries increase by 12.8 per cent last year, raising their average to £237,564. Seventeen of the top bosses earned more than £500,000, according to the Taxpayer's Alliance second annual Public Sector Rich List.
The pay rises, more than three times the national average . The top 10 earn an average salary of £799,000 – more than 40 times the basic pay of a nurse or soldier.

Top of the league is Adam Crozier, chief executive of the Royal Mail. The only person on the list with a seven-figure salary. Strike-breaker Crozier has presided over the cancellation of the second mail delivery and an increase in the price of stamps. He saw his pay package swell by 21 per cent last year, taking his salary to £1,256,000. The report shows that it equates to earning £1,000 every 1 hour and 27 minutes and he had the gall and audacity to say that the ordinary postal worker was over-paid
By ajohnstone at November 12, 2007