The morning after hang-over 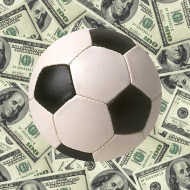 Let's feel sorry for the sad departure of Scotland and England from the qualifiers for Euro 2008 .

But also let us shed a tear for all those profits that will now disappear .

England's exit will cost the U.K. economy about 2 billion pounds , according to Simon Chadwick, a professor at Coventry Business School. England's failure will have ``far-reaching consequences,'' according to Chadwick, a professor of sport business. ``Sporting success is essential not only for the pleasure we get from it, but also for the psychological well-being and economic benefits it generates,'' he said and workers are more productive when England does well, according to the professor.

Sports Direct's shares fell 13.3 per cent to 97.5p this morning. Sports Direct has an agreement to buy 65 per cent of all England shirts that Umbro expects to sell in the UK in any given year.

"As England have not qualified for the 2008 European Football Championships, the company can no longer be confident of achieving that level of financial performance..."

Umbro, which generates nearly 50 per cent of its total revenue from the sale of England replica kit, has already issued a profit warning this year, after poor summer sales of England "home" kit. Trading has failed to improve and after last night's disastrous performance from the England team, Umbro will reduce the amount of "away" kit produced.

"The effect on 2008 revenues, though still unclear, will be more pronounced due to a substantial reduction in our expected sales volumes for the new Away jersey."

JJB Sports, which saw its shares fall more than 8 per cent to 133.75p this morning, owns a 9 per cent stake in Umbro.

The result is likely to be bad news for bookmakers, which now won't be getting a flood of money backing England in next year's competition. Shares in Ladbrokes which runs a chain of betting shops lost 0.4%.

Other sectors that could also take an earnings hit next summer include pubs chains and brewers -- as fewer fans will now pack into pubs to watch the games. Shares in brewer Scottish & Newcastle slipped 0.4%. Pub operator Punch Taverns fell 0.3%
And with the other U.K. teams -- Scotland, Northern Ireland and Wales -- all also failing to qualify, broadcaster ITV can also expect to attract fewer views for live matches. Shares in ITV slipped 0.4% in afternoon London trading.