The Ills of Capitalism 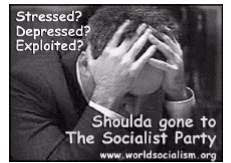 Prescriptions issued in Scotland for anti-depressants have risen more than four-fold in less than 15 years, an NHS report has revealed. For every 1,000 people there were 85 daily doses of the drugs dispensed in 2006, compared with 19 doses in 1992.

Dr Kohli, a medical adviser for NHS Quality Improvement Scotland, said the rise was partly due to a new generation of drugs.
However Shona Neil, chief executive of the Scottish Association for Mental Health, said :-
"Social problems are a bigger factor in the increase than the new drugs - these figures show a huge cry for help from people from deprived backgrounds."
Depression affects about one in five people at some point in their lives.
An appropriate moment to promote a day-school in London at the SPGB Head Office
THE INSANITY OF CAPITALISM
Saturday 24 November from 1pm
Living in a sick society Speaker: Brian Johnson (Disability Counsellor)
Capitalism on the couch Speaker: Peter Rigg (Psychoanalytic Psychotherapist)
Whose messing with your head? Speaker: Ed Blewitt (Clinical Psychologist)

Another quote from Shona Neil. The chief executive of the Scottish Association for Mental Health, said the figures betrayed a medical culture in which there was a "pill for every ill". She said: "People are being prescribed these pills for problems which are far beyond mental health issues. If you're living in poverty, are unemployed and without a good social support network, a pill isn't going to improve any of that. We have pathologised suffering to a level that isn't helpful."