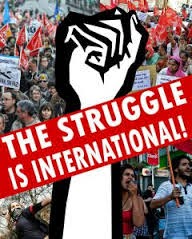 Socialists are internationalists. They understand that national oppression is just one particular aspect of the outrages of capitalism and that national oppression cannot be ended until the elimination of class exploitation. It is nationalism that can divide the workers so that the workers of one nationality are struggling against the workers of another nationality for a few illusory crumbs the rulers throw out exactly for that purpose. It is nationalism that can pit groups of workers against each other, while their mutual oppressors make off with both their purses for sun and fun. Nationalism means exclusiveness and implies that ones own people are better than all others. Nationalism is part of the capitalist ideology which developed with the emergence of nations and the rise and development of capitalism. The concept of nationalism is a historical category. It grew up in the epoch of the rise of capitalism and the overthrow of feudalism. The ascending capitalists were then the revolutionary class, and bourgeois ideology, including nationalism, was progressive. This ideology played a progressive role essentially in the 16th, 17th and 18th century, i.e., in the classical period of bourgeois-democratic revolution of the pre-industrial era. It was a powerful ideological and political weapon against reactionary feudal forces, the native or foreign absolute monarchs and their retainers, who resisted their emergence.

Nationalism preaches to the people of a nation or national group that regardless of class they have more in common with one another than they do with the people of other nations Nationalism helps bind the working class to the employing class of its nation. Nationalism serves the capitalist in the sense that they are seeking a market for their goods, and their national market is always primary. And nationalism serves to secure to the native business-man his domestic market. “National interest” is called upon to stifle class struggle. The universal idea of independent organisation of the working class, of the autonomous class goals followed by workers in the class struggle, of international class solidarity of the workers of all countries and all nationalities, is opposed to the idea of national solidarity. Nationalism is a thoroughly deceptive and mystifying ideology to prevent or retard independent class organisation and class struggle by the workers.

Ironically nationalism ultimately does not serve the real interests of the mass of that nationality or serve the nation. Experience has repeatedly shown that the national bourgeoisie will betray the people every time. This is true and has been proven correct over  and over again. Nationalism delivers the people into the hands of the exploiters of their own nationality.

The growth of Scottish nationalism has been born out of frustration. The programme of the SNP is blaming the problems of the Scottish people on "the English".  The fact that it has certain "radical" policies is neither here nor there. The idea that Scotland would be able to enjoy a genuine independence under conditions of international capitalism is false, so much so that the SNP have long talked of "Independence in Europe". All national states, no matter how big and powerful, are subordinate to the world market.

Since when is the working class worried by the trade problems of its own native employers? Since when do socialists counterpose solidarity with the business interests of their own employers to international solidarity of the workers of all competing capitalist countries, against all capitalist competitors?  Is the “independent” capital accumulation by Scottish employers a “lesser evil” as against English or European or American owners appropriation of workers surplus value?

The role of socialists is to defend and promote the interests of  the working class. The destruction of capitalism is the workers struggle and its victory is a new world not a new nation. While supporting the aspirations of people for greater control over their lives, the task of socialists is to combat the divisive nature of nationalism. Socialists must tell the workers the truth. And the truth is that nationalism (no matter how it is dressed up in "socialist" garb) represents no way forward for the working people. Our opposition to independence is based on a class opposition. An independent capitalist Scotland would not solve a single problem facing the working class. The problems of the Scottish workers flow not from being linked to England, as the nationalists argue, but because of the crises of capitalism which weighs just as heavily on the workers and their families across all borders. The exploitation of working people is a product of capitalist society and can only be removed by the socialist transformation of society. This, in turn, requires the unity of all workers, irrespective of nation, colour, creed, sex or language. It is essential to struggle against any attempt to divide the workers' movement along national, religious or sectarian lines. One cannot fight nationalism by pandering to nationalist and separatist prejudices. It is the task of socialists to sweep away the national barriers, not erect new ones.

We oppose all the agents of the ruling class and all the policies that are designed to help the ruling class. Left nationalists capitulate to nationalism and say “revolutionary parties” should represent only a section of the working class and be organised along national lines, and not united class lines. The Left nationalists deal with the question of Scottish nationalism exclusively from the point of view of political forces as they are – or more correctly: as they appear to be – to-day. But in the coming years, there will be many shifts and upheavals in Scotland’s and Britain’s political life, some of momentous character, as the class struggle sharpens and the crises of capitalism deepen. The main purposes of the Socialist Party’s education is to raise the level of class consciousness of the working class, not to fix the Party’s position by the present level of workers’ consciousness. Our Party case must reflect our socialist aspiration not the current backwardness of the working class.

In The Communist Manifesto Marx and Engels insisted that ‘the working men have no country’. They argued that the nation state was alien to the interests of the proletariat and that in order to advance their interests workers must ‘settle matters’ with the bourgeoisie of each state, that workers must challenge the power of their ‘own’ capitalist class directly.  This opened the possibility of internationalism – assertion of ‘the common interests of the whole proletariat, independently of all nationality’. Internationalism implied uncompromising opposition to the local state and its dealings with the rulers of other capitalisms – other members of the ‘band of warring brothers’ that constituted the bourgeoisie at a world level. It also implied practical activity by workers to organise in mutual solidarity across national borders and in solidarity with those subordinated by colonial powers. This was not a merely a matter of abstract identification with the oppressed. Marx maintained that workers must free themselves of patriotism and national superiority in their own interests, for without discarding these aspects of ruling class ideas they would never themselves be free. Marx and Engels maintained this approach throughout their political activities.  It was also the position taken by others who made a major contribution to Marxist theory such as Rosa Luxemburg.

Nationalism ties the working people to their own ruling class; world socialism unites the working people of the world against their rulers. Class unity must be established between the oppressed and exploited regardless of nationality and race. Marx said “labour in the white skin can not be free as long as labour in the black skin is branded.” And in referring to the need to overcome the hostile attitude of the English worker towards the Irish workers, Marx wrote: “He...turns himself into a tool of the aristocrats and capitalists against Ireland, thus strengthening their domination over himself.”

Socialists do not fan the flames of nationalism that further divisions between the working class. The Socialist Party promotes working class internationalism to unite the workers of the world.