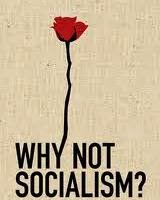 Capitalism is an exchange economy in which most wealth, from ordinary consumer goods to vast industrial plants and other producer goods, takes the form of commodities, or items of wealth that have been produced with a view to sale on a market.

Although states have intervened in capitalism ever since it came into existence, in so far as the aim was merely to interfere with the operation of world market forces, their intervention was only at the level of the division, not the production, of surplus value. However, over the past 100 or so years, there has been a definite trend in capitalism for states to go beyond merely trying to distort the world market, and to involve themselves in the actual production of wealth by establishing and operating state enterprises.

If state capitalism is not socialism, what is? In other words, if state ownership and government management of production does not amount to the abolition of capitalism but only to a change in the institutional framework within which it operates, what would be the essential features of a society in which capitalism had been abolished?

The feature of the present political situation is that the workers and exploited are beginning to take their determined steps in independent political action. The workers are being driven to this course by the ever-growing oppression of the employers and the increased use of the government powers against them in their struggles. The producers are being united in their fight against the common oppressor. This uprising of the workers is of tremendous significance in the development of the class struggle. This movement is an instinctive, elementary expression of their awakening class consciousness. It is not an artificial creation but on the contrary it is the natural, healthy reaction of the workers to the pressure of their condition.

What can we learn from history about building an anti-capitalist coalition? With well over a hundred years of experience produces a  number of valuable lessons for our consideration. There have been no lack of attempts to assemble an alliance of forces strong enough to defeat the capitalists and the corporations.  The historic record is littered with the wreckage of the political parties patched together to do that job. None of them succeeded. Once more we are encouraged to organise a coalition and  the formation of a new third party movement opposed to the old parties. Not a particularly new initiative although they may seem so to inexperienced people unacquainted with left-wing politics.

The history of the traditional “Left” has been marked by oscillations between the alternatives of reforming the Labour Party  or challenging the two-party system with a “progressive” third party coalition but rarely on an anti-capitalist programme. Both trends confine themselves to the aim of reforming capitalism, not replacing it with a socialised  economy. Each election the Left has gyrated from one of these positions to the other backing the Labour Party candidates as the lesser evil or creating a Left alternative.

Reformers offer a compromise, and forget that they will have to compromise that compromise.  Capitalism has produced a vast number of social sores and it is very tempting for the capitalist politician to deal with each of them separately and by itself. The more, however, we go on trying to remove theses evils by palliative remedies, the more does it become clear that they can only be abolished by the abolition of capitalism itself. Capitalists are not long before they have discovered means to compensate themselves, and the people enjoys the privilege of having won a meaningless principle.

Some on the left-wing argue the justification for ameliorative measures lies in the fact that they make it easier for the workers to organise themselves and enlighten themselves about the real meaning of capitalism and the part that they are forced to play under it, and show the thinking worker how futile it is to dream of reforming capitalism. They furnish besides that a rallying ground for those workers who cannot see beyond their own nose, and perhaps would not understand socialism, but do feel the need for a shorter working day. The great danger, however, arises when activists  try to persuade the workers as well as themselves that socialism only means the sum of a number of such regulations and legislations is also socialism. By that means socialists gets the credit for measures which are in all but the name measures for defending capitalism against socialism and all the disadvantages which arise from these acts are ascribed to and discredit socialism.  Has it not been repeatedly shown that it would be simpler and better to concentrate our efforts on the abolition of capitalist control of industry than on any attempts to reform it – that is not to say that we need reject any attempts from the capitalist side to reform capitalism, but we ought to regard them as what they are, as attempts to prolong the death agony of capitalism. The more cool we show ourselves about supporting reforms, the more keen will their capitalist champions become in promoting them. Our business should then be to show how inadequate all such reforms must be to remove the evils from which the workers were suffering. Above all is the need to demonstrate in our tactics that only with the abolition of production for profit, and the competition between the capitalists for sources of profitable investment which is an inevitable result of the capitalist system, can we get rid of the danger of poverty, want and war.

Workers overlook the fact that it is their will, the collective will of their class for which they are fighting. When we talk about the inevitability of socialism we assume that the workers will continue to struggle for their rights. Were they, on the other hand, to accept the word in a fatalist sense, and think that they could passively and tamely sit back and wait till socialism came to them, they would soon lose all the rights that they have now and become mere slaves.  It  has often been said that socialism can only come when the possibilities of capitalist production have been exhausted, but chief among these possibilities is the willingness of the workers to allow themselves to be exploited. Were the workers, both politically and economically, so class conscious and so organised as to make their exploitation impossible then capitalism would have reached the end of its tether. That is what we understand by social revolution, and our ideal – that of human cooperation – is revolutionary, because it is only to be realised by the social revolution.
By ajohnstone at May 13, 2014