For a new world not a new nation 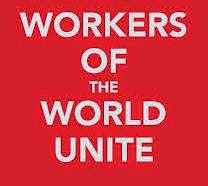 The task of socialists is to clearly speaking clearly for workers’ interests, ALL workers’ interests,  and support ‘internationalism’ against the ‘national interest’. We live in an upside-down world that protects the profits of a privileged few at the expense of the rest of us yet it is we, with our labour, our skills and our ingenuity that built this world and that keeps it running every day. And it is we who are overworked and underpaid. A socialist world is possible and worth fighting for.

The richest 10% of households in Scotland have 900 times the accumulated wealth of the poorest 10%, according to a new Scottish Government analysis. It confirms the old saying that money goes to money, with those who have a large slice of one form of wealth having other kinds too, while the poorest have little wealth of any sort, making it hugely difficult for them to accumulate some.

30% of Scotland's children live in households which between them own less than 2% of the nation's private worth.

The wealthiest 30% of households had 76% of all private wealth in Scotland: 84% of pension wealth, 81% of financial wealth, 70% of property wealth, and 54% of physical wealth.

The poorest 30% of households accounted for just 11% of physical wealth and less than 1% of private pensions, property and financial wealth.

The most recent figures show total household wealth in Scotland was £811 billion, of which almost half - £402bn - was attributable to private pensions. Property accounted for £230bn (28%), financial wealth such as savings, stocks and shares covered £90bn, and physical wealth such as cars and jewellery £89bn (both accounting for 11%).

There was little difference in the level of wealth inequality in Scotland compared with Great Britain as a whole. Independence for Scotland  has nothing to do with liberation and no section of the working class will benefit. The nationalists attack London’s mismanagement and promise Scots wealth beyond our wildest dreams. For whom? Scottish industrialists are well aware of the potential profits of separation.

Until we create our own class voice working people will remain locked out of political power. We need to declare our class independence and create a real alternative: a socialist one. Real change is never handed down by politicians. Real change is won by people standing together and building movements. Rallying workers to socialism is not a matter of clever tricks, skilful manipulation or stealthy infiltration. It is instead the demonstration of the correctness of the socialist case. Some deny this point of view and call for independence or appeal to stay in the UK union. In its fight against capitalism, socialists encounters various tendencies among the working class, which to a greater or less degree reflect the views and expresses a favourable attitude towards a particular section of the capitalist class. The working class requires to break through the obstacles placed in the path of independent political action. It must therefore, must propose its irreconcilable opposition to the capitalist class and the capitalist state. A socialist party cannot be an amorphous, all-inclusive party. We, socialists, refuse to join the reformists in leading the workers down the road into the camp of capitalism. The only road is the socialist road.