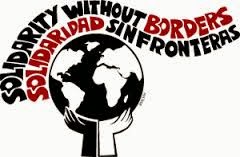 We accept neither the Union Jack nor the Saltire,
For the workers unity grow stronger everyday.
One weapon that we need is the peoples’ unity,
And we’ll build socialism from sea to sea.

Nationalism is indeed reactionary because it serves the preservation of existing power relations once they have been successfully implemented. The rise of nationalism was the capitalist class way of routing feudalism during the rise of capitalism. Capitalism was the great integrating force that broke down the barriers of feudalism. From the very beginning, therefore, the nation was a particular development of class struggle. In its origin, the fight for the nation was fundamentally a question of whether political power would rest in the hands of the new class of merchants in the sea-ports or remain with the aristocratic land-owners – could the rising capitalist class overthrow the feudal state, replacing it with their own particular state form, ruling over a creation that was essentially their own: the capitalist nation.

Marx and Engels supported certain nationalist struggles on the basis that it would help further development of the capitalist mode of production and opposed others which would retard that development. However, capitalism has now spread to every corner of the globe and every country is ruled by the laws of capitalism whether they like it or not.

Every country is a capitalist country in this day and age for the simple fact that to survive, they must play by the rules of the capitalist system. If a nation is no longer exploited, in order for the national bourgeoisie to continue existing, they must exploit other nations. The fact that an oppressed nation is no longer dominated by American capital (lets face it, in most cases anti-imperialism is actually often another name for anti-Americanism) doesn't make the socialist revolution closer by one single step. Organising around "the nation" instead of your class is inherently class collaborationist, and doesn't advance working class liberation a single step. Whether foreign or local, all employers have the same interests and their relationship towards the workers is no different. Foreign or local, it is the same struggle.

Nationalism is a crucial means of suppressing the animousity between workers and employers so that the working class would put aside its “sectional” class interests and instead identify with the business and the nation’s interests. The unity of the nation becomes the lofty goal to which all special group and class interests have to be subordinated. We are lectured that what is good for the economy is good for the worker.

Capitalism, due to its competitive nature, breeds the narrow and intolerant spirit of nationalism. This is caused by the fact that the capitalist class of the various nations, in seeking profits in foreign markets, have to depend upon their national States to back them up. Capitalism created the nation-state and the interdependence of world economy as one single unit  but in a contradictory fashion. On the one hand the capitalist nations are dependent on one another. But on the other hand they compete against one another. America doesn't invade and make war on countries or overthrow foreign leaders to replace them with leaders favourable to American capital because America is mean-spirited. It is because America is the home of the greatest concentration of capital, especially finance capital, and in order to survive the ruling class MUST do these things. China is the biggest threat to American imperialism today not because of its supposed Maoist socialist ideology but as a capitalist competitor in the control of cheap labour, raw materials and world finance.

It is the propaganda of the employers and their allies that promotes national chauvinism, the idea that people of one nation are superior to the people of other nations. This is the same national chauvinism that, along with male chauvinism, is used to promote divisions among workers in this country. It is national chauvinism, a false patriotism, that in effect advocates that workers from the various nations should compete with one another for the sake of profits ... profits that go to the very people who exploit all workers! We oppose those ideas that seek to divide the peoples of the nations! The worldwide struggle for socialism is also a worldwide struggle. The unity of all workers, across national boundaries, is truly celebrated with the Internationale not the Flower of Scotland.

Nations and the concept of nationhood are not eternal phenomena that have always existed. New ones have arisen, old ones have disappeared. National states did not exist before or under feudalism, for feudal conditions were not conducive to the development of large national communities. Oh, we know the instant response - What about William Wallace and Robert the Bruce in the Wars of Independence (wars are named by historians many years later to fit in with a desired image). The power in these times was the king and he demanded the fidelity of the nobility. The Scottish peasantry that made up the foot soldiers of any Scottish army fought not for the king, certainly not for his nation, but his clan chief. A look at Scottish civil wars will demonstrate that loyalty to ones clan came before obedience to the crown.

For left nationalists, though, independence and “socialism” go together and that this struggle must be waged simultaneously. But if they speak so often of independence it’s because, according to their logic, independence is essential to socialism and in fact, some rank it high above socialism. They put the question of socialism on ice. They shelve the question of socialism and replace it with immediate struggles and demands for reforms. Many of the Trotskyist groups, for example, have become Scottish separatists. The Trotskyists say they want to “radicalise” the movement for independence yet the SSP convenor sits alongside business leaders in the Yes campaign. One telling characteristic of Trotskyists is that, though they are forever dividing, they always end up uniting to divide the working class movement. They become in favour of Scottish independence because this point of view is currently quite popular among Scots but also because they believe that it is an easier way that they can enter through the back-door of various organisations, a favourite technique of taking control. As far as they are concerned the working class is too retarded to take up the socialist struggle. It needs a transitional programme of wishful promises. When they recommend national independence they merely pass a capitalist tool of exploitation from the hands of a foreign corporations to those of a Scottish boss.

The argument that the Scottish people will benefit more from independence is a fallacy. It is as if the folk in Edinburgh’s Niddrie or Pilton benefit by having the financial centre of Charlotte Square on their doorstep. It is the question of who owns and controls these resources which matters: otherwise the argument becomes one of whether we want our exploiters to have an English or Scottish accent, or a mid-Atlantic drawl. A Yes vote at the referendum is simply handing the keys of Scotland Inc. to its Edinburgh offices. We should not over-look the fact that the savagery of establishing capitalism in Scotland were perpetrated by Scot upon their fellow

None of our natural resources will be put to a sensible or beneficial use until the working class itself has gained control of the use of these valuable and irreplaceable resources. No socialist would suggest that the idea of one world state/government would be desirable or practicable but a network of cooperating yet autonomous geographical local communes, districts and regions with bottom-up structures alongside federated industrial unions of workers’ councils is a feasible possibility beyond the concept of nations.