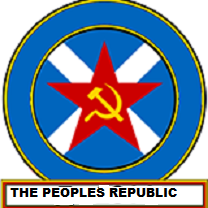 Marx and Engels supported only certain nationalist struggles on the basis that it would help further development of the capitalist mode of production and opposed others which would retard that development. However, capitalism has now spread to every corner of the globe and every country is ruled by the laws of capitalism whether they wish it or not. For left nationalists, though, independence and “socialism” go together and that this struggle must be waged simultaneously because, according to their logic, independence is essential to socialism (in fact, some rank it above socialism). The Left nationalist puts the question of socialism on ice, shelving the struggle for socialism and replacing it with demands for reforms. Many of the Trotskyist groups, for example, have become Scottish separatists. The Trotskyists say they want to “radicalise” the movement for independence yet can we forget that one of the promoters of RISE sat alongside business leaders on the Yes campaign during the referendum debate.

One telling characteristic of the Left is that, although they are forever dividing, they always end up uniting to divide the working class movement. They become in favour of Scottish independence because this point of view is currently popular among Scots. As far as they are concerned the working class is too retarded in political consciousness to take up the socialist struggle. It needs a transitional programme of wishful promises. RISE’s basic belief is that the Scottish worker is more radical than his or her English counter-part. But being anti-Tory doesn’t necessarily correspond to being more socialist.  Yet many of workers’ struggles in Scotland and England have been linked together and the victory of each often depends on the other.  The Scottish, Welsh and English working class have not developed separately but, because of capitalism, have developed as part of one united working class. Independence may rupture the united British working class movement at trade union level. Scottish independence would disrupt the unity of the working class fueling the myths of national brotherhood between exploiters and exploited.  In reality, a socialist transformation of Scotland could only take place in a British (European and World) context. Mass movements would take place also in Wolverhampton and Walsall, as well as in Glasgow and Greenock. A socialist transformation would be on a world scale. There is no Scottish road to socialism. For there can be no socialist Scotland, socialism is global or it is not socialism. The Scottish working class is exploited in the same way as the English working class: by the English, Scottish and international capitalist class. The bosses organises internationally and those sympathetic towards RISE want to ensure our class doesn’t do the same.

The task before workers in Scotland and the UK is to join in struggle against their common enemy, whether they wave the Union flag or the Saltire. The overriding goal is not to build new, smaller states but to end the nation state system through social revolution. The Socialist Party stands for the overthrow of capitalism and a precondition for this is the unity of the working class in this common struggle for socialism. RISE offer the same stale promises of the old Labour Party all dressed up in new clothes. Although they speak of “socialism” against “capitalism,” they do not propose the overthrow of capitalism, the working-class conquest of power, the expropriation of the capitalists; their basis is still the same basis of capitalism, of capitalist democracy, of the capitalist State, and therefore the outcome can only be the same. Their only proposals are for the constitutionally re-organisation of capitalism by re-locating the Parliament and government. This is precisely its value to capitalism, to act as a diversion for workers in the name of phrases of “socialism.”

Socialists must tell the workers the truth. And the truth is that nationalism, regardless of how it is camoflaged with Marxist terminology, represents no way forward for the working people. The establishment of a separate Scottish state is the creation of a capitalist state. Scotland envisage by RISE (and particularly if in coalition with the Green Party) would be thousands of small businesses thriving. There's no virtue in being a small business. They make their money the same way as large ones, by paying workers less than the value that they produce. Often the working conditions of small businesses are no improvement on bigger enterprises: wages tend to be lower, insecurity of employment higher, less health and safety oversight making the work riskier, the pollution worse. Left nationalists such as RISE are simply spouting populist rhetoric. Being against big business but in favour of small business shows little understanding of capitalism or of class.

Somehow in this "socialist" Scotland profit would no longer be the raison d'être
of businesses (even if they were cooperatives). The logic of capitalist production is the preservation of the capital invested and the creation of surplus-value – the origin of profits. This is a logic which is fundamental and cannot be suspended. Instead of being siphoned off to shareholders (who would of course receive fair compensation for their loss), the surpluses produced by workers would be used to increase wages, reduce hours, improve working conditions. Socially owned companies such as workers co-operatives or council-owned.  Banks would become more like building societies again or nationalised.  The creation of community banks or credit unions is not really doing anything that is in anyway revolutionary. It's definitely not challenging capitalism and property ownership. It is not questioning the parasitic relationship of capitalist production which is all about money -- money expanding into more money, the accumulation of capital.  Yes, their vision of a "socialist Scotland" is a nice and not a nasty capitalism. Left-wing nationalists  imagine that businesses in their " socialist" Scotland will no longer be concerned with costs or competition or commercial confidentiality or market share. But capitalism is now more than ever a global system of production. Competition is a fact of life for the capitalist mode of production. It has destructive effects upon the lives of working people. However, competition is also frequently destructive to capital. It is so destructive that large capitalists try to eliminate competition by buying up competitors, ruining them in various ways or forming cartels and monopolies. For one country to be competitive means having a higher productivity, lower labour-costs and lower infrastructure and taxation costs than another country.  Capital looks for places where production can be set up with low wages, low taxation, low levels of regulation and few restrictions on pollution. To be such a competitive location for capital investment – on any serious scale – would require that advanced capitalist countries such as Scotland will have to lower wages, taxation, regulation, welfare provision and pollution regulations to a standard level or below the current average available in Asia, Eastern Europe elsewhere. Or increase productivity to such a high level that massive levels of relative over-production would occur and increase pollution and resource destruction. Competition on the world level requires mass-production and mass-production conducted with fewer and fewer workers. And if each country adopts this path – a competitive race to the bottom of welfare standards will ensue. So increased competition will lower wages, lower environmental standards, lead to more exhaustion of raw material resources and more crises down the competitive road of economic growth.

Of course, the solution RISE will present to save their "socialist" Scotland will be by increased taxation. Taxation, is revenue extracted from wages, salaries, profits and sales of commodities. Under capitalism wages and salaries come from the payment for two main types of labour – productive-labour and unproductive-labour. Productive-labour is that which is employed by capital and preserves value as well as creating surplus-value. This value and surplus-value is the source of money-capital from which, wages, profits, rents, interest and those taxes collected from these sources, is paid. In other words surplus-value is the source of direct tax revenue for governments. Even the taxes paid on consumption also comes out of the wages and salaries of workers which have their origins in surplus-value.

The oppression and exploitation of working people is a product of capitalist society and can only be removed by the genuine socialist transformation of society, not pretend state- or municipal- “socialist” imaginations of a make-believe Scotland. This requires the unity of all workers, irrespective of nation, colour, creed, sex or language. It is our role as socialists to put across the case for socialism openly and honestly and not try to dupe our fellow workers into joining through the advocacy of so-called "transitional demands" and the like. The only way capitalism will come to an end is if a majority of workers decide to consciously replace it with non-market, non-statist alternative. Members of the Socialist Party understand well the urge to do something now, to make a change. That makes us all the more determined, however, to get the message across, to gather together our fellow workers to clear away the barrier of the wages system, so that we can begin to build a truly human society.
By ajohnstone at September 05, 2015