The seeds of the new society 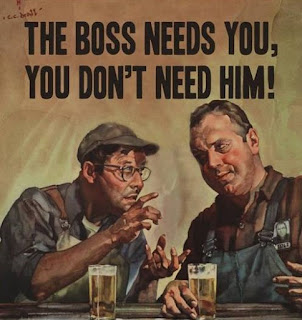 The basic assumption shared by many in the Labour Party is that it no longer makes sense to seek a socialist alternative to capitalism. Yet how capitalism continues to work against the interests of the majority strengthens the case for socialism. We need a different form of society, one in which working people get together to decide collectively and democratically how the world’s resources should best be used. Productive resources shouldn’t be controlled by cliques of overpaid executives and their cronies who run the big investment funds, but by the people who actually do the work of producing the goods and services on which we all depend. Rather than an economic system that relies on capitalists betting on which way the market will go, we need one based on democratic planning whose aim is to match resources to the real needs of ordinary people. The case for socialism is even stronger today than it was in the past. We need to start building a socialist alternative to Labour now. This is what we in the Socialist Party are trying to do. This will not be an easy task, but achieving it carries the promise of a transformation of society undreamed of within the Labour Party. Why not join us?

A popular image of socialism is that it is about self-sacrifice and self-denial. By equality we mean, not equality in personal requirements and personal life, but the abolition of classes; the equal emancipation of all toilers from exploitation after the capitalists have been overthrown and expropriated and the equal abolition for all of private property in the means of production after they have been transformed into the property of the whole society. That socialism is the levelling of everyone’s tastes and calling for uniformity of their personal lives, wearing the same clothes and eating the same dishes and to the same quantity is talking banalities and slandering socialism. The Socialist Party fully realises that mankind does not live by bread alone.

Socialism is something very different. It is the expression of a whole lot of new possibilities – imaginative, creative. Socialism is about enhancing one’s pleasure and enjoyment and rewards in life. Our case for socialism is that there is a phenomenal human potential which is being squandered every single day this wretched system persists. Our case about socialism is that we could be giants but instead we are all little men as Wilhelm Reich wrote of us. The potential of what we could be as people isn’t even beginning to be tapped, and that’s because we’re in a society which systematically divides us from each other, takes power away from us and prevents us from being organised. One changes oneself is in the process of changing the world. One doesn’t change very much as an individual. Change happens more and more as you get involved in the bigger things and suddenly your own individual change suddenly starts taking on leaps and bounds. The road to socialism lies through the experiences and struggles of workers. Those who want to join us on this road know where to find us.

Socialism is in accordance with the highest and noblest traditions and ideals of humanity. But socialism cannot be imposed upon the people by a minority. It is a movement in the interests of the vast majority and will come into existence only when a majority of the people want it and are organised sufficiently to obtain and maintain it. Socialism has gotten a bad name. Labourites and Leftists defined their socialism in terms of state ownership and control. They cut out of socialism its essence, its control from below and its accountability to working class democracy. The liberating and revolutionary element of socialism is its ability to unleash and mobilise all the human energies which a class society cramps and corrupts. For us in the Socialist Party socialism is not some paradise or Utopia, distant and unimaginable. The seeds of the new society are being sown all the time before our eyes, in the struggle against the old one.