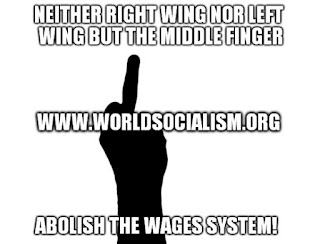 We come before you as an organisation advocating the principles of world socialism; that is, we seek a change in the basis of society - a change which would destroy the distinctions of classes and nationalities. Workers, although they produce all the wealth of society, have no control over its production or distribution. People are treated as a mere appendage to capital - as a part of its machinery. This must be altered from the foundation: the land, the capital, the machinery, factories, workshops, stores and offices, means of transport, mines, all means of production and distribution of wealth, must be declared and treated as the common property of all. The waste now incurred by the pursuit of profit and the amount of labour necessary for every individual to perform in order to carry on the essential work of the world will be reduced to something like two or three hours daily; so that everyone will have abundant leisure for following intellectual or cultural or sporting pursuits.  The Socialist Party aims at the realisation of complete socialism, and well knows that this can never happen in any one country without the help of the workers of all the world. For us neither geographical boundaries, political history, race, nor creed makes rivals or enemies; for us there are no nations, but only varied masses of workers and friends, whose mutual sympathies are checked or perverted by various ruling classes masters whose interest it is to stir up rivalries and hatreds between the dwellers in different lands. Socialism will be worldwide and universal, or it will be nothing.

Wage-workers are ravaged by this global scourge with lost jobs and low pay, wage freezes and wage cuts, downsized and diminished benefits, factory closures, out-sourcing and casualisation of labour along with strike-breaking and union-busting. What does the future hold for the working class? The prophets of profits talk of “free markets” and “free trade”. But how about freeing workers from wage-slavery? Marx said that the governments of the various countries were merely committees for administering the affairs, protecting the property interests, of the whole capitalist class of these countries. He said that all social institutions reflect the changes that take place in the economic life of a nation and that these institutions foster, and protect the economic owners of society in their private ownership and control. But capital today has become so absolutely global. To be effective socialists must array the workers’ Internationale against international capitalism.

They tell us progress and prosperity will ultimately trickle down. And we always ask “when?” and keep waiting. Working people have produced more wealth than the total output of mankind since the dawn of civilisation. But the gap between the rich and the poor is wider and deeper than ever in history. Despite all the advances in technology, billions today still have no food on their tables, nor clothes on their backs or roofs over their heads. The last 100 years of capitalism has been a century of over-abundance for the owners of capital and utter deprivation for those who live only by the sale of their labour. Is this the meaning of capitalist progress and civilization? Capitalism has been a history of wars and civil wars. Paradoxically, the esteemed professors and intellectuals teach that it is socialism rather than capitalism that is passé. Revolutionary movements which predicted the fall of capitalism are now likened to religious sects which prophesise the end of the world. But let these conceited academics beware the lesson of history. The barons of capital will be no different from the feudal lords and slaveholders of yore who thought they would rule forever. The capitalist reich will not last a thousand years. The workers have nothing to lose but their chains. They have a world to win.

But capitalism isn't going to end without a struggle. Nowhere is labour going to triumph without standing united against the foe. Socialism is coming but whether it be sooner or later depends upon us! The Socialist Party’s exists to make Socialists, and there is only one way of doing that — by teaching socialism, true socialism, revolutionary socialism, world socialism. Socialism must be seen as feasible and practical so that people are convinced that it will work. Socialist have find out from workers what they want most, and they must explain this in terms of and they must make the workers want more — make them want the Revolution. We must do this in words which can be understood immediately by the workers, in terms of their own lives. Our message is that all workers belong to the working class and must be conscious of it; that all the sources of wealth belong to the capitalist class — who are conscious of it; that this wealth must become the property of the workers before they can control their own lives
By ajohnstone at September 04, 2015