Socialism and a humane world 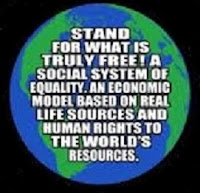 Most people consider "politics” boring, because what is generally thought of as politics is one set of professional politicians claiming to know how to make the lives of the majority even more profitable for the minority who employ us; another set quarrelling over how to do the same without it showing, and yet another set trying to do both. But politics is about power and the Socialist Party is about “people power”.  Politics is not profound or mysterious; it is the expression of class interests. The Socialist Party stands for the interests of the working class and therefore has as its policy the abolition of world capitalism and the establishment of common ownership. The profit system is hard to defend by rational argument and so many myths are used as a gloss over a system based on instability and violence. The struggle for a world of common ownership is the only struggle with a future and involves the end of mystification and the beginning of history made consciously by people free from dogma. Capitalism’s cover and camouflage have been blown away many years ago by Karl Marx.

The vital work of the Socialist Party is to encourage people to face the reality that their problems can be solved, and they can live a full, humane life, only through a social revolution which will overthrow the society of class ownership of the means of life. When these are the property of the entire human race there will be a world free of war, poverty, repression, of the tensions and ugliness which we live with today. In socialism, human beings will work and live together in harmony for the common well-being. Social relationships will be fashioned by the basis that wealth will be produced for its usefulness to people and not for the profit of a minority. In an unprecedented freedom, humans will be able to discover their true abilities; there will be a veritable explosion of creativity and people will look back on capitalism, with its wars, its poverty, its fear, its posturing leaders and the compliant, suffering people, as a black nightmare. To achieve such a new society, the world’s workers must look beyond the deceits of the leaders, to confidence in their own ability to run society in the interests of the majority. They must grasp the fact that capitalism is decadent, reactionary and repressive and that progress lies with the revolution for socialism. All the evidence encourages this conclusion; the ideas of socialism fit in with what we know of history, with the facts of our experience now, with all reasoned prospects for society tomorrow. Socialism will work and bring a humane world because it is based on reality. Socialists are the true realists. Socialism is a question of the entire re-organisation of society where the abundance of possibilities and potentialities is translated into reality.

Neither cybernation or automation determine the direction which capitalism must take; only profitability does that and technological complexity can act to reduce profitability. But new technology may make more workers want to realise the potential through a political solution. We can welcome the new technology as another example of capitalism’s abundant productive potential which could be used to make free access easier in a socialist world while attributing to capitalism all the social conflicts such as unemployment and alienation that are arising. Capitalism has solved the problem of production; it has built up a stock of means of production capable of eliminating hunger and poverty throughout the world and even of providing plenty for everyone. But what capitalism has not solved, and cannot solve, is the problem of distributing this potential abundance. It is incapable of doing this as its economic laws decree that priority has to be given to accumulating capital, or growth. Production under capitalism is geared to making profits, and not to satisfying needs. The only way to solve this problem is production solely for use, but this can only be done on the basis of the common ownership and democratic control of the earth’s resources, both those made by people and natural resources; in other words, by abolishing capitalism and replacing it with socialism. Only on the basis of common ownership can the aims of the activists in the environmental movement be achieved. Only in a society in which goods are no longer produced for profit can the problems of climate change, pollution and adulteration be eliminated. Only in a society where goods are no longer produced for sale can high-quality, long-lasting goods be produced. Only on the basis of the common ownership of the earth’s resources can humans restore the balance which capitalism has upset between them and nature and live in harmony with their natural environment and live sustainably. We have been taught to organise co-operatively to produce wealth for a minority, and only the bare essentials for ourselves. There is nothing but our own fear of freedom preventing us from organising co-operatively to establish socialism, to produce for the use of all.

Socialism does presuppose a certain level of consciousness: before it can be established there must be a majority that wants and understands it. Such a socialist consciousness clearly does not exist today and that is why socialism can’t be established straight away. In fact, this is the only reason why it can’t, since everything else is there: a world-wide productive system capable of providing abundance for all and trained and qualified workers able to operate it. Those people who called themselves ‘socialist’ should devote all their efforts to helping a socialist understanding to develop.
By ajohnstone at April 27, 2016