Socialism in our hearts 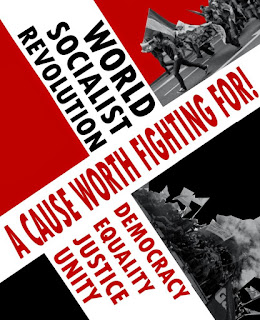 The world we're living in right now won't allow fundamental change of the sort we need to eliminate all the social problems that make our lives a misery. You don’t get people to change by scaring them, or pointing fingers. Instead, give them an alternative that’s so compelling they want to have change. So let’s tell stories of our dreams and not the nightmares. A fear-based politics breeds cynicism, apathy or hopelessness. The more people start believing we can create a better society, the sooner we can start taking positive action. We should be planning for a future in which things get better. When you realise something’s wrong with the world, the first step has to focus on educating yourself about it. Then, when you begin to have a grasp on the issue, you step up and do something about it. We can change the world, but the key to doing so is in you and me and others all working together.

We live in extreme times. We are over-worked and undernourished. Those of us not caught in violence and poverty, are traumatised by its images. We are reaching our limits. People can't stand their jobs. People want out. You don't have to be in jail to feel imprisoned. People are wakening up and are realising how crazy it is to live in this society. Despite millions of years of evolution and fighting to stay alive, members of the most advanced species on the planet are now choosing to end their own life through lack of purpose and meaning. Seemingly disparate crises are not happening separately and accidentally. They are interrelated symptoms of our global capitalist system. The global elites have no intention of interfering with the profits they make. Those who are despoiling the planet do so for personal and corporate gain. Their worship of Mammon, the idol of power and greed, threatens to doom the human race. If we keep going the way we do, there won’t be a planet left.

Isn’t it very strange that the two most basic things needed to live, food and a home, are still not a right. To have a safe place to sleep and food to eat is the foundation of all life. Yet that costs money, which is created and hoarded by a tiny elite, in effect making all other rights void because people have to submit to all kinds of cruel and undignified ways to make enough money to simply stay alive. Automate whatever menial jobs can be automated, get rid of unnecessary jobs. Growing food can be a community service – each member working 4 hours a week. It might not be perfect but it’s a heck of a lot better than what we have going on now. Many people think money makes the world go around, or the global economy, at least. They consider it in a similar way that gravity holds the planet in orbit. But this is simply not fact. Money’s creation is no law of nature.

According to Kropotkin, anarchism (and for us in the Socialist Party, his definition is a valid description of socialism): “is a name given to a principle or theory of life and conduct under which society is conceived without government – harmony in such a society being obtained, not by the submission to law, or by obedience to any authority, but by free agreements concluded between the various groups, territorial and professional, freely constituted for the sake of production and consumption, as also for the satisfaction of the infinite variety of needs and aspirations of a civilised being.” It is a form of social organisation with a set of key principles, such as self-organisation, voluntary association, freedom, autonomy, solidarity, direct democracy, egalitarianism and mutual aid. It rejects both a capitalist economy and a nation state.

Resistance and struggle are not separate from the rest of life. Caring about politics is optional for too many people. As if it somehow doesn’t affect them. Political activity is not just someone’s hobby. Radical grassroots movements are the groundwork for the new world we carry in our hearts. At first they start as essential support lines for survival and small-scale resistance that are available to the weak. At the same time these networks and communities are the same ones in which we live, learn, play, work, invent and build alternative social and political structures. As a movement’s strength grows, and as crises expose weaknesses in its enemies, these networks become the infrastructure for open revolution.

The best way to give away your power is to think you don’t have any. Over and over, people say that they cared deeply about the need for social change, but were hesitant to speak since they weren’t experts. They deferred to others who knew more. But we need all voices — not just experts on Marxist theory. It is important to have all kinds of people, from all walks of life, be part of the socialist movement — whether you’re new to it or a many-year socialist veteran. More voices means more power to make change. You don’t have to be an expert to join in the call for a just future. Once you start learning about social justice, the learning never stops. We can’t afford to wait until we “know enough” to raise our voices. Socialism won’t be achieved without a movement that is big and diverse enough that everyone has a voice, regardless of the amount of knowledge they possess of Marx and Engels.
By ajohnstone at April 03, 2016