The crumbs or the bakery? 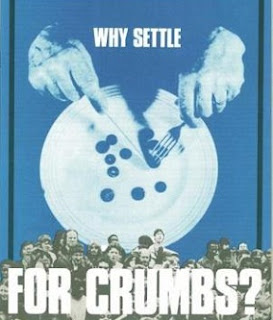 “Private capitalists inevitably control, directly or indirectly, the main sources of information. It is thus extremely difficult, and indeed in most cases quite impossible, for the individual citizen to come to objective conclusions and to make intelligent use of his political rights.” Albert Einstein.

Politics today is a game in which gangs of professional politicians compete with each other to attract votes, the gang securing a majority of seats in parliament assuming responsibility for running the political side of the profit system. To win votes the politicians have to promise -- and be believed -- to improve things both for the population in general, as by managing the economy so as to avoid slumps and crises, and for particular groups within the population.

When the economy is expanding or even just ticking over the incumbent party in power have the advantage. They can claim that this is due to their wise statesmanship and prudent management. Such claims are false as the economy goes its own way -- expanding or contracting as the prospect of profits rises or falls -- irrespective of which gang of politicians is in office. But making such claims can backfire as, when the economy falters, the Opposition can blame this on the incompetence and mismanagement on the Ins. But that's not true either since politicians don't control the way the economy works.

Throwing crumbs to the people (or to carefully targeted sections of the people whose votes could swing things) is not the main purpose of government. Marx once wrote that the government is "but a committee for managing the common affairs of the whole bourgeoisie". And it's still true. The function of any government is to manage the common affairs of the capitalist class as a whole. This involves a number of things. Sustaining a context in which profit-making can continue. Spending the money raised from taxes (that are ultimately a burden on the capitalist class) in a prudent way on things that will benefit the capitalist class as a whole, such as providing them with an educated, relatively healthy and so productive workforce. Maintaining -- and if need be using -- armed forces to protect sources of raw materials, trade routes, investment outlets and markets abroad. That's what most government spending goes on, and balancing this against income from taxes is what budgets are essentially about.

It is only because wage and salary workers, active or retired, have the vote that, occasionally if there's a small margin of money spare, a few crumbs are offered to some section or other of the electorate. No doubt, the pensioners, the home buyers and the families offered a few hundred extra pounds a year will accept these crumbs cast before them. Hopefully, they won't accept them as bribes to vote for his particular gang of politicians, but simply because it would be stupid not to pick them up.

Nowadays most people have learned by experience and are, rightly, just as cynical about the politicians and their promises -- and crumbs -- as are politicians about how they get people to vote for them. But cynicism is not enough. This should be turned into rejection. The politics game is to decide which gang of professional politicians should manage the common affairs of the capitalist class, only continues because most of us agree to take part in it. But by voting for them we in effect give them the power to keep the capitalist system going. And that, not which particular gang of politicians happens to be in office, is the cause of today’s problems since built-in to capitalism is putting making profits before satisfying people’s needs.

Socialists are only too well aware that most people put up with capitalism, and go along with its political game in the hope of getting a few crumbs out of it, because they see no practicable alternative. Politics should be more than individuals deciding which politicians to trust to deliver some crumbs that they think will benefit them individually. It should be about collective action to change society. About taking over the whole bakery.

You are again faced with a bunch of politicians who can only be distinguishable by the colour of their rosettes, and you may already be of the opinion that there is little that separates the mainstream parties and have no intention of voting. Millions of people are not prepared to support any of them. Indeed, recent elections have resulted in the lowest turnout since World War II and the trend is repeating itself across the globe. It is particularly to those members of the electorate who are not prepared to follow leaders, who think they are all tarred with the same brush, and unwilling to put their faith in the promises of politicians.

Many know little about The Socialist Party or our idea, unless you are a regular reader of our literature or visitor to our web site. Certainly many people have heard the word “socialist” and imagine it has something to do with the nationalised industries or with countries like China and the former Soviet Union. It is understandable that many people regard socialism as just another political cliché, once used by Labour politicians to win votes, but having very little meaning.

The Socialist Party stands solely for socialism because we do not think that the present social system – capitalism – can ever be made to work in the interests of the majority of the people. This is not the fault of government policies, but the present social system in which they are operating. Capitalism always puts the needs of a minority who own and control the factories, farms, offices, mines, media, the means of wealth production and distribution before the needs of ourselves, the working class.

It is a hard but undeniable fact that no political party – including The Socialist Party – can legislate to humanise capitalism or make it run in the interest of the working class. That is why it is important that the working class stops giving its support to politicians who support the profit system. None of them can solve unemployment or crime or any of the other social problems we face today, despite their proclaimed recipes for success. None of them will prevent tens of millions starving to death each year. None of them will provide decent housing for everyone. None of them will end the threat of human annihilation as a result of war, because militarism is inevitable within a system based upon the ferocious competition for resources, markets and trade. Why waste your time voting for parties that cannot make any of these urgently needed changes? Why go on in the hope that some miracle will happen and end the insanity of the profit system?

So what’s the alternative? We say that the resources of society must be taken into the hands of the whole community – and by that we do not mean the state, but all of us, organised together, consciously and democratically.

In a socialist society we will produce for use, not profit. This means producing food to feed the world’s population, not to dump in the sea if it cannot be sold profitably. Producing for use means ending the colossal waste of resources on armies, armaments, trade, banking and insurance and all the other social features which are only necessary within capitalism. By running society on the basis of common ownership, democratic control and production for use we can all have free access to all goods and services.

Two points should be clear by now:
Firstly, this is no ordinary political argument. We have made no false promises; we have not patronised you and neither do we beg for your support. Indeed we do not ask for your support unless you are convinced that the case for socialism is a rational one and in your interest Socialism, if it is to be the democratic and sane society that we envisage it will be, can only be established when a majority of the people understand it and want it, so there is no point in seeking support on any other basis.
Secondly, what we are advocating is different – it has never existed. The Tory have-beens have nothing new to offer. The Labour Party, if re-elected, will continue its futile exercise of trying to run a system based upon exploitation in the interest of the exploited.

Do you agree with the following statements:
1) Capitalism puts profits for the few before the needs of the many.
2) Labour governments, “Communist” states and proposals to reform the present system cannot establish socialism.
3) Socialism is yet to exist.
4) Socialism means a society of common ownership and democratic control, where production is solely for use.
5) Socialism means a world without buying or selling, where people give freely of their abilities and take according to their needs.
6) When a majority - including those who have previously abstained – understand and want socialism, the new system will be established.

If you think the above statements are correct then it is time for you to join us.
By ajohnstone at April 09, 2016