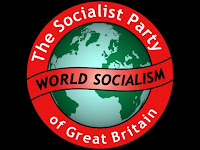 The working class live by the sale of their labour power. Many workers know that there is something wrong and want to change society. Some join reform groups in the hope that capitalism can be patched up, but such efforts are futile because you cannot run a system of class exploitation in the interests of the exploited majority. At present the capitalist class control society through their possession of political power, through their control of the machinery of government. They did not construct this machine for this purpose. It evolved along with the evolution of society as a whole. If the working class is to become the master of society — which it must do in order to change it — then it must recognise itself as a class, and organise itself politically as a socialist party, expressing workers' recognition that their emancipation can only be achieved by the expropriation of the capitalist class and the establishment of socialism.


A movement which aims at the establishment of a social democracy in which human values flourish cannot employ means which conflict with this end. It must to a certain extent reflect the new society it aims to create. A socialist party must organise on democratic lines. Its membership must have complete control over policy; all its officials must be responsible to the membership; there must be complete freedom of discussion within the party; there must be no division into leaders and led; there must be no secret meetings from which any section of the membership is excluded. Not only must a socialist party be democratic, it must also be open and transparent in its methods. Like other social phenomena, it will grow out of social conditions and will not appear ready-made.


At present, there are two hurdles standing in the way of achieving socialism: the political ignorance of the working class and the control of the machinery of government by the capitalist class. To overcome these obstacles socialist understanding must come first. Socialist understanding or in Marxist jargon, class consciousness, is not something that can be constructed out of nothing. It must grow out of social conditions. It will not arise simply as a result of the propaganda of the socialist party. Ideas only grip the masses when they are relevant to social conditions.  Political education is not just about reading and learning from books and pamphlets; that is just one aspect. The actual experiences of the working class under capitalism will teach it that socialism is the answer to its problems. The role of the socialist party is storing up and passing on the lessons of the past to serve as a guide to dealing with current events and issues. Once a higher degree of political knowledge has been acquired, political conditions will completely change and with changed conditions will come a change in the role of the party. It will become the political organisation of the working class which they can use to capture political power.


The Socialist Party is a political party, separate from all others, Left, Right or Centre. It stands for the sole aim of establishing a world social system based upon human need instead of private or state profit. The basic socialist principle advocated by the Socialist Party is that it people will give according to their abilities and take according to their self- defined needs. Work will be on the basis of voluntary co-operation: the coercion of wage and salary work will be abolished. There will be no buying or selling and money will not be necessary, in a society of common ownership and free access. For the first time, the people of the world will have common possession of the planet earth. the Socialist Party has no leaders. It is a democratic organisation controlled by its members. It understands that socialism can only be established by a conscious majority of workers — that workers must liberate themselves and will not be liberated by leaders or parties. Socialism will not be brought about by a dedicated minority as some left-wingers would have it. Nor do the activities of paid, professional politicians have anything to do with socialism — the experience of several Labour Party governments has shown this. Once a majority of the working class understand and want socialism, they will take the necessary step to organise consciously for the democratic conquest of political power. There will be no socialism without a socialist majority. 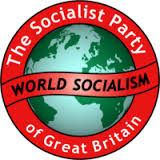 There are countless dedicated campaigns and good causes which many sincere people are caught up in, but there is only one solution to the problems of capitalism and that is to get rid of it. Winning workers to the socialist case requires knowledge, principles and an enthusiasm for change. These qualities can be developed by anyone — and are essential for everyone who is serious about changing society. Capitalism is a system of waste, deprivation and insecurity. You owe it to yourself to find out about the one movement which stands for an alternative society.