The Socialist Party insists that the workers must win political power and capture the State machine to obtain supremacy over the capitalist class. The property-owning class can only "command” the economic conditions by being in political control. Their economic interests unite the capitalists into political parties to control the governing machine so that their economic interests can be defended. Hence the fierce competition to win a majority of the working-class voters to maintain capitalist control. The capitalists are combined through the political government in order to hold the proletariat in subjection. Anarchist politics ignores the enormous power of the State machine to suppress revolts. It ignores, too, the lack of resources of the workers when on strike or "locked out.” Revolutionary Syndicalism/Industrial Unionism cannot establish socialism, for it organises the workers by industry and divides the workers up into industrial sections, each concerned with its own industry. The Socialist Party hold that the workers must first of all realise their common interests and unite into a class organisation as socialists struggling for political control. The forms of the workers' economic organisation under capitalism will reflect the growing class understanding and Socialist ideas of the workers. The Socialist Party rejects “workers’ management” as a solution to workers’ problems. We insist on the abolition of wages. We say that tinkering with administrative forms is of no use. Buying and selling must be abolished. The wage packet—the permission to live—must be abolished.


Wherever one turns, one discovers disappointment with the Labour Party at its manifest failure of to make an impression upon the various evils of the worker’s life. Some supporters of the Labour Party appear to consider that their leaders’ failure is personal; that it is due to not having the right men in office. It is plain, however, to anyone understanding the above facts, that no shuffling of ministers in the Government can accomplish any vital change. Any attempt to interfere with the normal operations of capitalism could only introduce chaos and intensify the very evils of which the workers complain, thus bewildering their supporters and producing an even more rapid reaction than that at present in progress. Economic laws cannot be set aside by the emotional rhetoric of orators, however sincere they may be. The only logical alternative to capitalism to-day is socialism, and as the majority of Labour Party supporters are not socialists, they will not support any fundamental attack upon capitalism. The present leaders of the Labour Party are astute enough and experienced enough to realise this, and they possess sufficient control over the party’s wire-pulling machinery to hold the left-wingers in effective check. Reformers plan to re-arrange the wages system. They imagine that slavery can be operated in the interests of slaves! They are wasting their time.


At present the majority of the workers lack the necessary knowledge to organise for socialism. Only economic development coupled with intelligent propaganda can teach them. In the meantime, all the efforts of calculating schemers and well-meaning blunderers can only bring them disappointment, disillusion and despair. The Socialist Party has said this for over a century, and it is prepared, if necessary, to go on repeating it. Day by day the truth of our contention is being confirmed. The bitter fruits of compromise are apathy. The attempts of reformers to gloss over and patch up the class-struggle have failed. For ourselves, however, not having based any hopes in the Labour Party, we find no cause for despair. The need for our existence becomes plainer than ever. Out of a realisation that compromise is futile will grow the conviction that the socialist policy of unswerving determination to end capitalism by attacking unceasingly its political props is the only fertile one. The failure of Labour is but the echo of the failure of Conservatives.  It is capitalism which fails to permit the workers to enjoy the fruits of their work. The interests of the workers demand a social change, a change from the private ownership of the means of living to the common ownership thereof. To that end we summon those workers whose blinkers are falling from their eyes to organise for the capture of the powers of government in order to achieve their emancipation. Capitalism is a society of unrelenting insecurity and poverty. The lot of all workers under capitalism. Their day to day struggles will be more frequent and intense, and the outcome a continuing vista of repetitive struggle over the same issues—work and wages.


Men and women will never be free from exploitation and oppression until all work is voluntary and access to all goods and services is free. Socialism means a world-wide society, democratically controlled, without profits, wages or money. This is a practical proposition now. All attempts to solve such problems as war, poverty, hunger, alienated and degrading toil, inside a society based on wages and profits are sure to fail. We, alone of all political organisations, use the slogan “Abolition of the wages system!”


It is true that the capitalists, like all ruling classes, live in great luxury and possess immense power. But it is a mistake to think that the workers are poor because the capitalists consume so much. On the contrary, the wealth actually consumed personally by capitalists is an insignificant (and diminishing) fraction of total wealth produced. Taking the consumption of the capitalists and sharing it out amongst the workers would result in a rise for us all of only a few shillings a week. It is a fact that our masters live off the fat of the land, but if they starved we should still be slaves. Socialists are not primarily concerned, like moralists of “fair play,” to indict the caviar and yachts of the super-rich, but rather the misdirection of production: the subordination of consumption to accumulation and the immensity of organized waste and destruction.


The wages system is the universal badge of class servitude and exploitation. When the class system of capitalism is scrapped, the wages systems will go with it. Poverty and insecurity are inherent in this capitalist society. Wages only represent enough wealth, on average, to keep workers in working order and to provide replacements when they wear out. Capitalism necessarily degrades both workers and capitalists in a thousand different ways. But this degradation presses harder upon the workers whose whole lives are spent as appendages to someone else's pursuit of profits, mere extensions to the productive resources of another class. They are harried and driven, deceived and deluded by more refined methods and to a greater degree of intensity than any exploited class in history. They are divided and subdivided and taught to take up the spurious ideology of their masters as their own. All wars in the modem world are predatory—fought by workers who own no means of production, to enable the victorious sections of the capitalist class to re-divide the plunder. Workers clearly have no stake in such a set-up.


The life of the working class is spent in struggles to maintain a meagre level of existence at the mercy of blind economic forces they as yet can only understand vaguely, if at all. Leisure becomes a respite between work shifts and work becomes a drudge to be regarded as a necessary evil, instead of an essential means of self-expression through social creativity. As much as workers hate employment and have little interest in what they do, they live in fear of unemployment and develop neuroses of resentment against “outsiders" or “foreigners” who are seen as a threat to “their” jobs. They fill half the hospital beds with cases of nervous and mental disorders which arise from the pressures to which capitalism subjects them. Yet, epithets such as "agitator" and “trouble-maker" are commonly applied to anyone who seeks change.


With the advent of socialism, goods and services of all kinds will be produced solely for use. Social products will no longer be exchanged, but will be freely available, because the means of production will belong to society as a whole. There will be no means of exchange or any other barrier between people and the things they need. The pattern of conduct that follows from common ownership will be a harmonious one; just as that arising from class ownership is antagonistic. Human dignity will again be able to assert itself, free from exploitation. The conditions which cause war and poverty will disappear. People will willingly co-operate because they will be conscious of their involvement in society and will be in control of their environment. The fact is that in order for socialism to be established, a majority of the world’s workers must understand and desire it. From the basis of this understanding, new, truly human relationships will arise in place of the crude cash nexus. 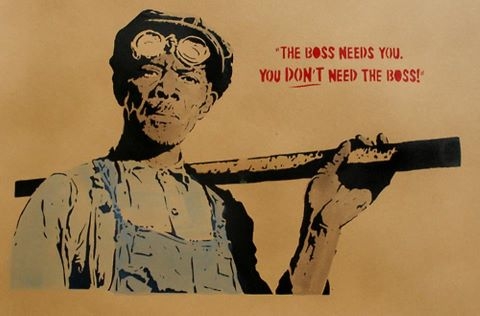