Will working people achieve their destiny? 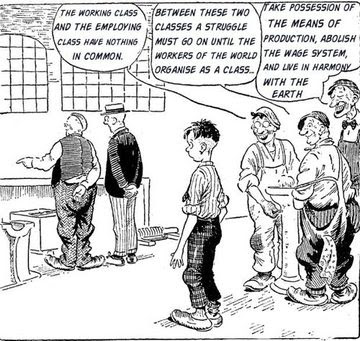 Modern capitalist society rests on the relations between the two main classes in capitalism, the working class and the capitalist class. Marx discerned the clue to understanding modern capitalism and indeed all class society in the existence of the class struggle between contending classes, in modern times, the struggle between the two main classes of workers and capitalists. It is true that the working class is weighed down and kept in bondage by the capitalist class and that the capitalists spread backward ideas in the working class and use that as one of the methods of keeping them down. Yet, for the first time it becomes possible to see beyond the seeming labyrinth and chaos of events to their underlying cause, the class struggle. We are just at the beginning where socialism can be realised, and mankind can proceed to develop a class-free society. But it is a beginning. Class unity is the key to the future. Once again the working class will pronounce its contempt for the “condescending saviors” who really work to save capitalism, knowingly or not. Once again the working class is coming to recognise itself as the inheritor of the entire history of humanity’s struggle for a better world. Capitalism, although through the brutal means natural to it, has created the social and technical basis for future abundance. Through the working class, humanity will be able to rid itself of problems now unnecessary and insane — starvation, war, exploitation, racism, sexism, chauvinism and human degradation in all its forms. Our fellow-workers will be motivated to produce abundance not by the lash of the market but by a common consciousness of their common ability to build a human, egalitarian world in which creativity and culture can flourish. Only the working class by changing the social system can bring peace and undreamed of abundance for all.


In “Wages, Price and Profit “Marx insisted that if workers were to abandon their battles around wages and working conditions, then “they would be degraded to one level mass of broken wretches past salvation ... By cowardly giving way in their everyday conflict with capital, they would certainly disqualify themselves for the initiating of any larger movement.”


But these battles are not ends in themselves. In the very next paragraph Marx also warned against exaggerating the importance of such battles and becoming “exclusively absorbed in these unavoidable guerilla fights incessantly springing up from the never-ending encroachments of capital...”

Thus while this struggle is necessary if the proletariat is to resist everyday attacks and still more to develop its fitness for revolutionary combat, such struggle is not itself revolutionary struggle. Moreover, unless the economic struggle is linked to building a consciously revolutionary movement – unless, as Marx puts it, it is waged not from the view of “fair day’s wage for a fair day’s work” but under the banner of “abolition of the wages system” – then such struggle turns into its opposite, from a blow against the capitalist to a treadmill for the worker. A handful of capitalists control our world and make vast profits on the labour of the working people and the natural resources of the land. All the major means of production - the factories, forests, farms, fisheries and mines are in the hands of a few hundred capitalists.

Capitalism is a system of exploitation. A handful of parasites live off the backs of the workers and could not care less about their situation. Every bit of the capitalists' vast wealth was stolen from the working people. The capitalists get rich from the fruit of our labour. At the end of the week a worker collects their pay. The capitalists and their apologetic flunkies claim this is a fair exchange. But it is highway robbery. In reality, workers get paid for only a small part of what they produce. The rest, the surplus value, goes straight into the hands of the capitalists and their flunkies. The bosses get rich, not because they have "taken risks" or "worked harder," as they would have us believe. The more they keep wages down and get fewer workers to do more work, the more they can steal from us and the greater their profits. If the bosses think they can make more profit somewhere else, they just close their factories and throw the workers out on the street. People live in misery so a small clique of very wealthy individuals can live in luxury. Capitalist society also callously mistreats people because everything is geared to the drive for profits
The idea that everyone can get rich under this system is a lie invented by the rich themselves. Under capitalism, the only way to get rich is to trample on someone else. There is only room for a few capitalists - at any time the great majority must work and be robbed. This is why workers have only one choice: either submit to this wage slavery or fight it!

Capitalism is a global system of international exploitation. The corporations invest their capital abroad, penetrate foreign markets and plunder the natural resources of developing countries. They also attempt to dominate other countries politically and to a degree militarily. This international exploitation brings enormous profits for the big corporations, and wretched lives for the people of the developing world.

Capitalism is a system of economic chaos and crisis, plagued by periodic economic crises, such as recessions, which are becoming more serious and complex. It is the very nature of each business to try to maximise its profits by pushing production and cutting expenses, especially the pay of workers. Productivity tend to go up and wages down. The result is that companies find they cannot sell all they have produced, and they lay off workers. This only worsens the situation and the economy sinks even further until they have eliminated their surpluses. Economic crises are aggravated by speculation, hoarding and other schemes of the bankers, financiers and industrialists. Each tries to profit in the short run, but their individual greed eventually throws the whole system into turmoil, leading the working class and people to suffer. Capitalists have always tried to put the burden of the crisis onto the shoulders of working people. It has tried wage freezes, cuts in benefits, cuts in expenditure on health and education, and bail-outs to business. For working people the future is less and less certain. Wages fall or remain stagnant while hours and working conditions deteriorate. Working people make up the overwhelming majority of the world's population. But in nearly every country they are the oppressed majority, labouring to support the luxury of a handful of exploiters.

This anarchic system wastes a great deal of social wealth. Capitalism is an obstacle to the further advancement of the material well-being of society. It is unjust, wasteful, irrational and increasingly unproductive. This exploitative and oppressive system, where profit is master, has choked our entire society with economic crises, political reaction and social decay. The drive for profits holds thousands hostage to hunger and want; it has poisoned the very air that we breath and water that we drink; it spawns cynicism and violence, drugs, crime and social devastation. The problems of capitalism - exploitation, anarchy of production, speculation and economic crisis, oppression, and the whole system of injustice - arise from the self interest of the tiny group of capitalists.

The planet is capable of satisfying the needs of all its people. But today the great majority of people are faced with poverty, deteriorating health, education and other social services. Capitalism has created the economic conditions for socialism. Today the whole system of production is socially interdependent, but it is controlled by private hands. In place of private control of social production there must be social ownership if society's problems are to be addressed. Socialism will be won through the revolutionary overthrow of capitalism. Having overthrown the capitalist class, the working people will take over the economic forces developed by capitalism and operate them in the interests in society. Socialism will be a better society, one which will present unprecedented possibilities for the improvement of peoples' lives. Because working people will control the great wealth they produce, they will be fundamentally able to determine their own futures. The end of exploitation of one person by another will be a liberating and transforming force. Socialism will not mean government control. The State serves the interests of the ruling capitalist class. When the government intervenes in the economy, it does so to help, not hurt, capitalism. What will not be developed in socialism are the massive government bureaucracy and repressive state apparatus (police, courts, prisons) which are used to control the people and defend the privileged. A socialist society would have no such needs.

The exact features of socialism will emerge as our struggle against capitalism develops but we can visualise some features. The means of production - the factories, mines, forests, big farms, offices, transport systems, media, communications, retail chains will be taken into common ownership. Private ownership of commercial enterprises will end. The personal possessions property people will be left alone.

The economy will be planned to serve human needs rather than simply profit and luxury consumption by the rich. This will release the productive capacity of the economy from the limitations of profit maximisation. A great expansion in useful production and the wealth of society will become useful. Rational planning will replace anarchy. Coordination and planning of the broad outlines of production by public agencies will aim at building an economy that will be stable, benefit the people and steadily advance. Redirecting the productive capacity to human needs will require a variety of economic methods and experiments. There could be a combination of central planning, local coordination. Various policies might be used with changing conditions. But no matter what means are chosen, a socialist economy must uphold the basic principles of social ownership, production for the people's needs, and the elimination of exploitation. Factories and other manufacturing facilities will be modernised to eliminate back-breaking labour and ecological damage.

Transforming the main productive enterprises from private to social ownership will allow workers to manage democratically their own work places through workers' councils and elected administrators, in place of the myriad of supervisors and consultants today. In this way workers will be able to make their work places safe and efficient places that can serve their own interests as well as society's. Productivity gains will be used to shorten the working day and improve living standards, rather than create unemployment. Construction of housing, schools, medical, cultural and sporting facilities for working people will be a priority.

With socialism, goods and services will be distributed on the basis of from each according to their ability, to each according to their needs. No longer will employers, investors, landlords and speculators live off the labour of others. Every person will get the opportunity to contribute to society as much as they are able. To administer socialism, the people will establish a social democracy, for the people by the people. The people will elect officials and representatives at all levels of government and the economy. There will be the right of recall and referendum. The voices and the will of the people would be heard, not simply those of the rich. 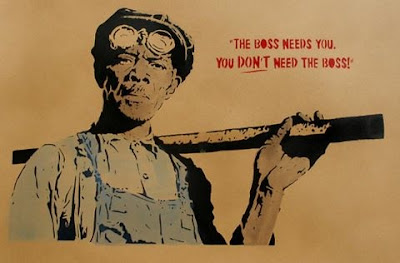