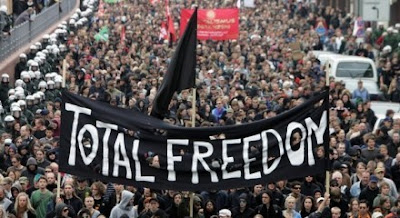 All class societies are based upon and filled with social contradictions and conflicts. Capitalists are interested in production for profit, socialists in production for use. Capital is based upon a constantly increasing exploitation of labour, in order to maintain its profit; workers constantly resists this exploitation. There is and can be no such thing as a “legitimate profit,” inasmuch as all profit is derived from paying workers less than the value they add to the product. There is and can be no such thing as a “fair day’s wage for a fair day’s work,” inasmuch as wages are the payment for only one part of the day’s work, the other part of which the worker is compelled to contribute to the employer in the form of surplus-value, or profit. The capitalist class always seeks to intensify the exploitation of labor by reducing wages, increasing the work-day, or speeding-up production, or by all three at once; and labor always seeks to raise its wage and working standards. Capitalist always seeks to increase their profits, which can be done only by exploiting workers and workers always seek to resist exploitation, which can be done only at the expense of profits. These are fundamental economic facts. Under capitalism, nothing that all the capitalists, or the government can succeed in wiping out these facts.

The capitalist class, of course, indoctrinate the workers from childhood that they are entitled to an “honest profit” as it is so decreed by divinity and “human nature.” They fill the heads of the workers with the idea that capitalism always existed and always will. Maybe it should be improved a little, patched up here and there, but not ended. They work hard at instilling these ideas into the heads of the people. If these ideas did not prevail, they could not retain their power. The defence of the interests of capitalism is, however, incompatible with the defence of the interests of the working class. The revolutionary idea is that the workers should organise as a separate, distinct class, independent of the capitalist class. To meet the capitalists on the economic field, the workers organised trade unions. To deal with the capitalist class on the political field, it is necessary to organise a socialist party. The class struggle is a political struggle. It cannot be fought successfully by the workers unless they have a political weapon.

When speaking of socialism and socialist revolution we seek “no condescending saviours” as our great workers’ anthem, the International, says. We do not believe that well-wishing reforms – and there are well-wishing reformers – will solve the problems of society, let alone bring socialism. We believe that task belongs to the workers, only the workers itself. Regretfully, in the so-called socialist parties, that idea does not dominate. The Socialist Party start by teaching fellow-workers to rely upon themselves. There is no socialism and no progress to socialism without the working class, without the working class revolution, without the working class in power, without the working class having been lifted to “political supremacy” to their “victory of democracy”. No socialism and no advance to socialism without it! That is our principle. That is what we build the fight for the socialist future on. That is what we’re committed to. The Left have lost their hope for the working class because for so long a period of time it has, and it does, lie dormant and seems absolutely passive. In other words, the Left have doomed the working class which, however, has shown itself so capable of so many resurgences in the past years of its struggle. They doomed it to eternal servitude. The Left cannot accept the idea that the workers can free themselves. The Socialist Party has nothing in common with such people and want nothing in common with such people in all their 57 varieties of Trotskyism.