You have the Power - Be the Change 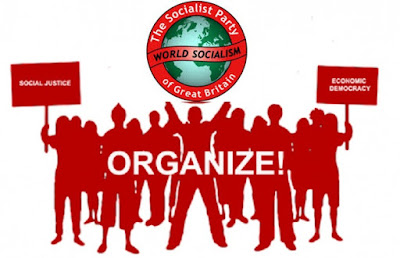 Socialism will protect the planet from the profiteering planet-plundering capitalist class. The World Socialist Movement (WSM) is very clear about which side we are on - the people’s side.  We put forward  our socialst vision of the future to draw working people to us to organise and fight for that vision. For sure, our movement has not greatly grown, but nor has it disappeared. We need to build political power to create a socialst sharing economy. No matter who is elected,we  need to continue to build that people power. Now we need to move from protest to political action.

Dealing with climate crisis requires major transformation of our economic system. We need to challenge the illusion that governments and corporations can solve global warming. To save the planet we must overcome the ruling class. Many communities are riven with divisions – personal, social, religious, cultural, class, gender, age, sexual-orientation and of course race. Building unity across these many divides is hard, the WSM tries to break down these barriers.

One could look around today and see no opportunity for change. The reality is that these many crises offer opportunities for people  to build a better world for ourselves and future generations. The starkness of the current polarisation is an opportunity to change the debate from one of reforms to revolutionary transformation of society. Of course, there is no guarantee regarding our success but there is potential we can realise. The Socialist Party is building toward being a movement that can make transformational changes to the system. We now have the possibilities to organise in our communities, to connect with others throughout the country and around the globe.
The World Socialist Movement is a movement of movements linking issues that seem unrelated. We are building solidarity across borders. Together we can build the power to create a new world. Socialism requires action. A worker is someone who has survived and who can create the future.


Despite capitalism having reached perhaps one of the lowest point in its history of degradation, of suffering and misery imposed upon the peoples of the whole world political parties are openly committed to the support of capitalism and the rule of the capitalists. In the midst of a period when capitalism has most clearly proved its utter bankruptcy in solving and its utter inability to solve a single important problem facing society as climate change, politicians remain supporters of capitalist ideas. When the working class throughout the world are once more beginning to rise against this rotten, outlived social system, the reformists persist in trying to patch it up with policies couched in the language of the capitalist class itself. The Left are openly committed to the appeasement policy of the “lesser evil.” The working class are now being taught that progress no longer lies along the road of class independence and class action. Working families are being told to make  sacrifices in order to prop up the tottering structure of capitalism. Here are the facts in this country and all over the world. The working class enjoys no rights; it enjoys no power. It is gagged, bound and fettered by a ruling class, which has a complete monopoly of power, rights and privileges which looks down on you only as tools. Its only interest in you is to use you to maintain it in power. If you give up the class struggle and support capitalism now then, later, when YOU are ready to resume the class-struggle for socialism, you will find that you will have enormously strengthened the capitalist enemy, and terribly weakened, disoriented and demoralized the working class. The class struggle cannot be abolished or postponed under capitalism. The capitalists always defend their class interests. If workers do not fight as a class, capitalists will surely triumph. Do you want to be guilty of helping the enemy win?
The Socialist Party is still revolutionary, world socialists, irreconcilable enemies of capitalism. We have not abandoned the cause of socialism. We have never flinched from the struggle against capitalism and never forsaken the principles, of socialism. It is the time to re-dedicate yourselves to the revolutionary socialist principles and to the struggle for socialist freedom. Return to the ideas and ideals taught us by such teachers as Karl Marx and Frederick Engels. Turn your back on the base falsehoods and cynical treachery of the leftists who try to treat you like robots and not like revolutionary socialists. Unite in the class war against capitalism. There is a comradely place for you in the Socialist Party to help battle capitalism, with its oppression, exploitation, wars, misery and slavery.