There is a cure for the COVID-19 virus, as for all the other disasters that the disease of capitalism has brought into this world and which it is still producing but, even worse, that it will produce in the future.

The cure is not immediate and definitive, that is clear, but it is a cure that fixes the minimum conditions for facing the environmental, human and social emergencies that capitalism will bequeath to the society that will replace it.

Socialism is the cure for this pestilence. We can guarantee our cure will work because it implies a radical change in mindset as well as in economic and social relations, exactly what this planet and this humanity so dramatically stricken with capitalism needs today.”


The idea of socialism and creating abundance is far more powerful, inspiring and empowering than the idea of eradicating poverty. Central to the meaning of socialism is common ownership. This means the resources of the world being owned in common by the entire global population.

But does it really make sense for everybody to own everything in common? Of course, some goods tend to be for personal consumption, rather than to share—clothes, for example. People ‘owning’ certain personal possessions does not contradict the principle of a society based upon common ownership


In Socialism, gangsters’ cliques will lose their socio-economic breeding grounds. Their anti-social and anti-natural survivalist tricks – “the most violent, mean and malignant passions of the human breast, the Furies of private interest” (Karl Marx) will fall into oblivion.
Competition for possessions will give way to cooperation for life.
Humanity will regain their lost original nature once again by demolishing their “fear of freedom” in a knowledgeable coherent relationship among themselves and with their surrounding nature, moving on to a higher phase of social progress, reaffirming equality, freedom, peace and happiness in unison, in harmony.
“The meaning of peace is the absence of opposition to socialism” (Karl Marx).
According to him, with the dissolution of the power of money, private exchange and private property will cease to exist; “then you can exchange love only for love, trust for trust, etc...” (Marx, Economic and Philosophical Manuscripts of 1844).
Marx and Engels held genuine socialism to be "Communismus, Socialismus, Humanismus" (German Ideology Chapter 4),
Engels clearly set out the progression: “State interference in social relations becomes, in one domain after another, superfluous and then dies of itself. The government of persons is replaced by the administration of things, and by the conduct of the processes of production. The state is not “abolished”, it withers away.” (Frederick Engels, Socialism: Utopian and Scientific)
World socialist society will do away with classes and will be organized on a three-tier system of local, regional and global councils to deal with the administration of all their respective specific responsibilities relating to life, things, relations and problems. Money will go to the museums beside bronze axes. Private property and all its paraphernalia relating to money, wages, profits, private, joint-stock, state, multi-national, transnational and corporate et al. ownerships, and all selfish private interests as against social well-being will be things of the past. Under such a global arrangement of things and affairs of life, the crimes of today will also be a thing of the past. In the event of any rarely occurring aberrations on the part of an individual member of society, the response will be educative and social correctional and compassionate counselling. Humans will have elevated themselves to a higher stage in history as a new-born humane species, leaving behind their prehistory of competition and conflict. 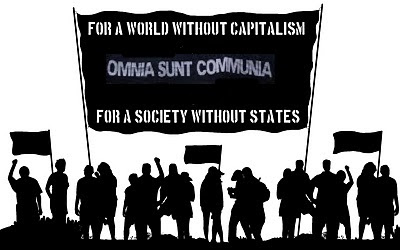