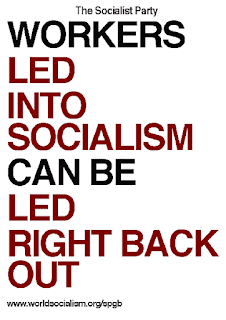 The Socialist Party shows that the master class are able to maintain and continue their rule in society because they control political power. The centre of this power is Parliament. Here the laws are made and the forces (Army, Navy, Police, etc.) are authorised and supported for the purpose of enforcing those laws, the wishes of the master class. This political power is placed in the masters' hands by the workers, as the latter possess the majority of the votes. At every election the candidates depend upon receiving a certain number of votes in every area before being elected. Except for two or three special constituencies the workers have the majority of votes in every area. Hence the necessity for the masters to obtain these votes either for themselves or for their agents, at each election.
Once in control of political power the masters can crush any attempted use of force by the workers, whether such attempt be through economic organisations or secret societies.
The only solution in line with the facts of life around us is for the workers to use the franchise to obtain political power for the purpose of achieving their emancipation. Equally clear is it that, until a majority of the workers understand their slave position and desire to alter it, they will allow the masters to continue to rule by voting them into control of political power. Hence the stupidity of fancying that a "minority" can carry through a revolution. Therefore the Socialist Party must be opposed to organisations that preach such futile methods.

"Trust us," they tell us, "we will look after you." But to give complete power and authority to any individual or group is to give them something they can and may sell out to the class enemy. The only safeguard the working class has in its fight for emancipation is to keep control and power in its own hands. Executive committees, organisers, officials, etc., must all be servants of the working class, taking their instructions from, and carrying out their orders under the control of that class.

Socialism means the social ownership of the means of life. Hence the majority of society must not only be convinced of the necessity for socialism before it can be established, but they must keep control in their own hands if social ownership is to continue.