A New World to Come 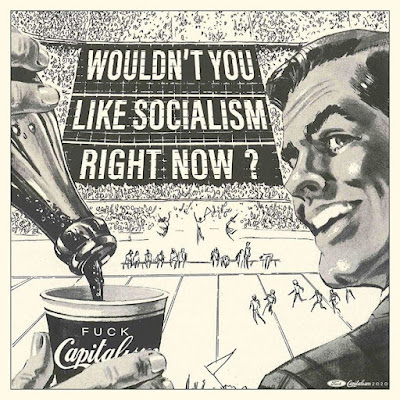 The toiling millions, find it impossible to live in the increasing austere conditions everywhere and some  are getting ready to end capitalism and to establish socialism. As Marx said:

“Along with the constantly diminishing number of the magnates of capital . . . grows the mass of misery, oppression, slavery, degradation, exploitation, but with this grows the revolt of the working class, a class always increasing in numbers, and disciplined, united, organised by the very mechanism of capitalist production itself.”

Reformists have always presented their conception of the gradual rise in the standards of the workers and their progressive acceptance of capitalist evolution as the way to socialism, bringing about improved conditions for labour, lending an air of plausibility to the theories about the advancing standards of the working class under capitalism. But the truth of Marx stands out with crystal clarity.

As the Communist Manifesto says:

“pauperism develops more rapidly than population and wealth...it becomes evident that the bourgeoisie is unfit any longer to be the ruling class in society . . . because it is incompetent to assure an existence to its slave in his slavery, because it cannot help letting him sink into such a state that it has to feed him, instead of being fed by him.”

The unrest of the working people is worldwide as unemployment balloons and one wave of wage-cuts follows another. The developed world is not exempt from the growing global movement of resistance. Workers, faced by intolerable conditions, are exhibiting the initial characteristic signs of radicalisation in strikes, protests and militancy. The possibility of revolution begins to menace capitalism. There is a revolutionary storm brewing. The producers suffer intolerable exploitation and misery from capitalist conditions.

The policy of the ruling class is to try to find a way out of the crisis by throwing its burden upon the shoulders of the working class. This is being done by a vast system of starving the unemployed, wage-cuts, speed-up and inflation schemes. Under capitalism, science is a slave to the class interests of the bourgeoisie.

Capitalism is doomed. The capitalist system of private ownership of industry and land, production for profit, and exploitation of the workers is reaching the end of its course. It has outlived its historic mission. The limited progress that capitalism has accomplished for humanity has been achieved at the cost of incredible misery, poverty, ignorance and slaughter of the working class. Capitalism has created the objective conditions for socialism. But it can go no further. The workers of the world are getting ready for their great social task of abolishing capitalism and establishing socialism. They are freeing themselves from the illusion that capitalism provides the way to prosperity.

Socialism will abolish the class division of society, i.e., simultaneously with the anarchy in production, it will abolish all forces of exploitation and oppression of man by man. Society will no longer consist of antagonistic classes in conflict with each other, but will represent a united commonwealth of labour. For the first time in its history mankind will take its fate into its own hands. Instead of destroying innumerable human lives and incalculable wealth in struggles between classes and nations, mankind will devote all its energies to the struggle against the forces of nature, to the development and strengthening of its own collective might. The future socialist society will be free of the State. With private property in industry and land abolished (but, of course, not in articles of personal use), with exploitation of the toilers ended, and with the capitalist class finally defeated and all classes liquidated, there will then be no further need for the State, which in its essence, is an organ of class repression. In the words of Engels, the State will “wither away” and be replaced by a scientific-technical “administration of things.”

The guiding principle will be: “From each according to ability, to each according to needs.” That is, the distribution of life necessities—food, clothing, housing, education, healthcare etc.—will be free, without let or hindrance.

Socialist production, carried out upon the most efficient basis and freed from the drains of capitalist exploiters, will provide such an abundance that there will be plenty for all with a minimum of effort. There will then be no need for pinch-penny measures.